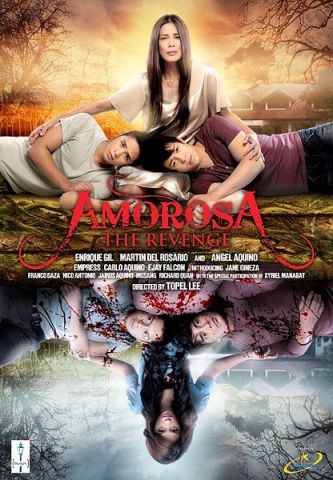 Finally!! A day off all to myself and a chance for another waaaaay overdue Review here at the ol’ Litterbox.This time out, it’s the latest creepy Philippine ghost story to find its way across the big ol’ ocean direct to your Favorite Catgirl’s DVD player… “Amorosa: The Revenge”.

Our synopsis goes along these lines: “After suffering from a terrifying vehicular accident, Rosa, with her two sons Amiel and Rommel, transfers to the old Pension House owned by Rosa’s aunt. Rosa hopes that the new place will heal the rift that has existed between her and Rommel since the accident. As she seeks to move on from that tragedy, she finds herself being haunted by the vengeful and faceless ghost of a young girl brutally raped and killed in the Pension house years before. She discovers that the ghost targets those for death who victimize women in similar fashion and that Rommel himself might be implicated in a similar crime. When Rosa attempts to escape from the ghost and save her son from both the vengeance of the spirit as well as the police, she is forced to face the bitter truth that she has been secretly avoiding since the tragic accident.”

Yep. “Ghostly Vengeance From Beyond the Grave”… a little brotherly rivalry… maybe even some post-traumatic mental illness thrown in for good measure. Certainly sounds like this wee lady’s cup of tea, Hehehe!! Think it might be yours? Then naturally you’ll wanna “Read On” and find out if hunting down a copy for your very own might just be in your future…. 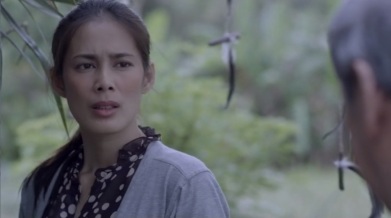 So… the first thing you’ll want to know about this one is… is it actually a ghost story or just one of those films where the main character is… well… merely unhinged and hallucinating throughout the whole story. I’ve been forced to sit through quite a lot of these lately (Yep…. That’s right Chinese and Hindi Filmmakers… I’m lookin’ at you guys… 😉 ).

Not that I’m adverse to a little bit of “bait & switch” movie-wise, now and again just to shake things up… but it certainly seems to yours truly that the whole plot notion of making a “ghost story without any real ghosts” has been quite overused of late. Thankfully, I can tell you that this is not the case with “Amorosa”. Mind you, the story is a bit convoluted and somewhat simplistically contrived at times. But if you are willing to pay attention, things aren’t too difficult to follow. 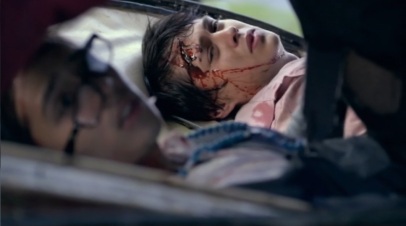 Our tale revolves mostly around Rosa (played by Angel Aquino). Basically she’s got herself one dilly of a problem. She’s the doting mother of two boys… Amiel and Rommel (played by Martin del Rosario and Enrique Gil respectively) and as fate would have it, Amiel has inherited a genetic disorder which slowly steals his eyesight eventually rendering him blind. Rosa blames herself for his unfortunate condition and dedicates herself to keeping him safe and happy. It’s a tough job… and a responsibility she also puts on her other son Rommel as well. He’s a good brother and does what he can to help out, but you just know this all is going to put a strain on his relationship with his Mom…..

Eventually the boys grow up, and just when Amiel finds a place to break away from his family and lift the burden of watching out for him it all goes to heck in a hand-basket. His Mom’s not crazy about him leaving, especially to go to a church sponsored school for the blind and while arguing with him, they all get into a terrible automobile crash. She’s thrown from the wreck, but the boys are trapped with the car teetering on the ragged edge of a cliff. Helpful locals try to save them, but it looks like only one will be able to be pulled from the car before it falls…. She gets asked, “Which one do we try to save first?” Yeah… I know. Kinda stupid, but that’s our big plot widget designed to create animosity, tension,  and fray away at the already strained bonds of family. Especially once she chooses Amiel over his brother right in front of both boys…. Awwww crap. 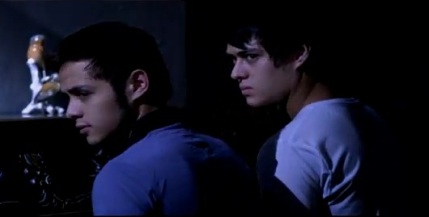 Things jump forward… and the family moves to the old pension house her now deceased aunt has left them, trying to somehow forget the accident and move forward. Pity the place is haunted. Oh yeah. Big time.  Seems a young girl named Sandra (played by Empress Schuck) was raped and killed here some years back and now her spirit lingers about, seeking to punish all men who hurt or mistreat women. It isn’t long before that become more than a gruesome rumor for our little family either.

But first…. It’s “Spoiler Alert” time, as we really can’t go much further in this review without giving some fair important things away. OK…. although Rosa seems to be struggling to keep a connection with Rommel while continuing to favor poor blind Amiel, the truth is her cheese sorta “slid off it’s cracker” waaaaaay back at the accident scene. Oh yeah…. you see instead of rescuing both boys successfully, the locals did only manage to grab one to safety…. Rommel. Yep… noble Amiel sacrificed himself to save his brother, even hearing that Mom wanted him saved first. He died that day and all the time he’s been shown wandering about the pension house he’s either been a ghost… or more likely a figment of poor Rosa’s tortured mind.

Rommel? Well, naturally he’s angry at the idea that his Mom would have let him die to save Amiel, as well as tortured by the thought that his brother was more than willing to die to save him. Good thing the little local girl Amanda (played by Jane Oineza) he met here years ago and had a brief crush on still lives here. Even better? She’s all grown up… sweet, pretty, and still remembering fondly both him and the little romance they almost shared. Hmmmm? So what could possibly go wrong? 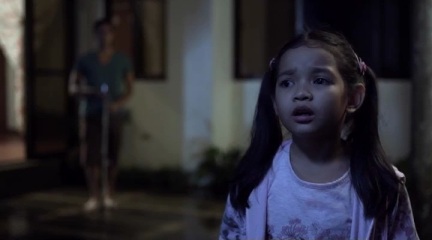 How about the almost perquisite “Bad Boy” crowd that every angry young man starts running wild with when there are problems at home? Oh yes…. and naturally those nasty bastards will try to rape sweet Amanda and frame Rommel for the crime. Ummm? Won’t that piss off the spirit of Sandra and bring down her ghostly wrath? You betcha!! 😉

Add in an angry Police Inspector who was a young boy back when Sandra was killed… who witnessed the crime and has always held himself responsible for being too weak to save her and you just know our boy Rommel is in for some serious problems. Luckily, the ghost of Sandra knows what’s what…. and she makes very, very certain the right people get their just desserts in proper grisly fashion. Troubled young guy, Rommel? Don’t worry about him…. he’s got a ghostly bro still looking out for him from the “Great Beyond” so you just know it’s all gonna work out for him and Amanda in the end.

So will he and his Mom sort things out? Will our ghost finally find peace? Yeah… yeah…. you just know that’s a given, and all in around an hour and a half too. Not too shabby , eh?

Can’t really say this one was a big surprise all in all, it pretty much sticks to all the expectations, and even the “I see dead people” stuff isn’t really all that surprising or novel, but hey…. it still works. It’s simple… serviceable… well acted and filmed. Easily worth an evening’s watch if all things ghostly and weird (like for a certain Catgirl…) are your thing. I can give “Amorosa: The Revenge” a middle of the road 3 out of 5 “Meows”. As always… the Philippine DVD is excellent for the 15-19$ US price, presented in widescreen, with perfect English subtitles on board for your viewing pleasure.

Ahhhh, yes…. the Trailer. Don’t think I’d let you all go without a peek at one of those now, would I? 😉