We have for you today a review of “Congkak”, an honest to goodness Malaysian horror film… Neko hasn’t seen one of these since “Chermin”, and that was waaaay last year. The Malaysians don’t seem to release very many of these, seeming content to watch the avalanche of Indonesian horror that gets imported there. At least Neko doesn’t find too many of them…..(and I look really, really hard!)

The synopsis for it reads:“Kazman is a dedicated husband who, despite his wife Sufiah’s protests, decided to buy a bungalow for their family near a lake as a family getaway. Anxious in the new house, Sufiah feels as if someone is watching her. Her daughter Lisa, who would always go downstairs at night to play congkak with someone whom she could only see, compounds her uneasiness. Sufiah throws the congkak in the lake, but is awakened the next night by the sound of the congkak being played again and upon investigation, she sees an old lady playing it. When her daughter disappears, the oldest resident in that area, Pak Man, comes to the family’s rescue and helps in locating the missing family members.”

Haunted house… check. Weird goings on and cute kids in danger… check. Evil spirit possessed game… check. Loving wife ignored by her idiot husband until it’s too late… check. Sounds like it’s all here. But does it all work? Let’s find out…….

So….. now you, like your Favorite Catgirl Princess, are now probably asking, “So… What the heck is Congkak anyway?” Well, it’s Wikipedia to the rescue on this one…. Congkak, it seems, is a mancala game played in the island of Borneo, Singapore, and Peninsular Malaysia. Minor variants are known as Tchonka, Naranj, Dakon or Sungka and are played in Indonesia (mostly Java), Sri Lanka, the Maldives, southern Thailand, the Philippines and the Marianas. In Indonesia, it is called “Congklak” meaning cowrie shells, which are often used as pieces. The Congkak board has fourteen holes in two sets of seven, plus an additional store for each player. Each player controls the seven holes on their side of the board, and their score is the number of seeds in their left-hand store. Basically it sounds like a “capture the seeds” sorta thing…. but enough learning already! We know it’s all traditional and stuff but what we just want to know is if it’s a SCARY game!! 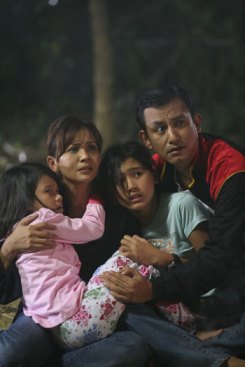 Basically, “Congkak” tells the story of a family who want to take their family vacation at a little house in the jungle outside of Kuala Lumpur. Kazman, the father (played by Riezman Khuzaimi), bought this bungalow sight unseen through a shady arrangement made with some friend of his. Despite the fact that his eldest daughter, Elly (played by Erin Malek) is upset that this vacation ruins her teenage social life, Kazman is utterly determined to have a family getaway. Soon after they arrive, they start to encounter uncanny events that threaten to consume their family and destroy their happiness forever.

>Kazman’s wife Sufiah (played by Nanu Baharuddin), has been having bad dreams. Creepy, haunting dreams in which a mysterious old lady keeps trying to steal away her little daughter Lisa (played by Erynne Erynna), luring her off to play the game of congkak. Her husband thinks she’s just overworked…. that the vacation will fix all that up. Boy, is he wrong. (But then, aren’t they ALWAYS wrong…)

The house is nice….. awfully nice considering it’s waaaay out in the jungle and Kazman got an unbelievably good deal on it. In these sorts of films, that usually tells you you’re in for trouble. And it doesn’t take long for that to start. Almost right off the bat, eldest daughter Elly gets herself possessed. Yep….. the good ol’ fashioned “frothing at the mouth, epileptic seizure and talking in tongues, crazy evil” sort of possessed. That never starts off a vacation well… 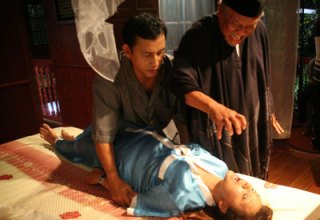 Luckily, their weird neighbor Pak Man (I’m assuming NOBODY in Malaysia has ever heard of the old video game otherwise they’d have named him almost anything else) just happens to be a Muslim holy guy or something like that.

He knows all about the locale, it’s history… and just how to put the Islamic whammy on evil spirits. Thank goodness…. You’d think this would be enough to have the family packing up and beating a hasty retreat back to Kuala Lumpur, but you’d be wrong. Kazman stubbornly figures Elly is just “going through a phase” or something like that… nothing to get overly worried about. Especially when he’s spent all that money for the house. Sigh…. so, sooo stupid. 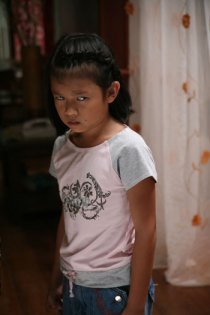 Then little Lisa starts hearing voices in the night…. and it isn’t long before she finds the haunted congkak board. She starts spending her nights playing the game endlessly with the evil spirit of the old lady from her mom’s dream. She starts getting all petulant and evil…. but only her poor mom sees that, Kazman is still unwilling to believe her warnings about the dread that threatens them. He keeps telling her they’ll leave after “just one more day”. What a dork…… 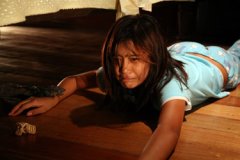 Well, the spirits keep teasing poor Sufiah with illusions and the standard sort of spooky mischief, until finally the ghosts grab Elly and pull her under her bed and whatever dark otherworld is under there. Then Kazman finds Sufiah doing the whole “floating over the bed” trick. That finally convinces him that there just might be a problem. By this time poor lil’ Lisa is gone… lured off by the evil thing to play congkak forever.

But, hey, all is not lost!! There’s still Amazing Holy Guy, Pak Man!! He shows up just in the nick of time and proceeds to slap the Islamic mojo on all the nasty spirits. First he gets Sufiah to stop the floating thing, then he spits Elly out from under her bed and rallies our little family for the final showdown with the evil congkak spirit to save Lisa. Here the film cuts loose with it’s special effects budget. We get some glowing holy symbols, and an honest to goodness flaming crack in the ground just perfect for casting the evil spirit down to Hell….. Yay!! Goodness and the Power of Allah win yet another one for the home team.

This one is admittedly a simple film, and short too. The Malaysian Film Archives list it as being 86 minutes in length, while the official Malay DVD release runs only 78 minutes… (although the DVD cover claims 90 minutes… go figure.. )

As with most Malay or Indonesian efforts, there is almost no overt gore (actually none in this case) and the horror elements are subdued and rely more upon mood and atmosphere than anything else. The special effects and makeup are well done too, and if Neko has any complaints, it’s with the DTS soundtrack itself. There is at times a disturbing background hum that is magnified by the Dolby audio track and other times when certain sounds are badly rendered.

The Malay disc is Region free and in NTSC format, strangely enough, which is good news for those of us in North America, with good separate english subtitles for our viewing pleasure.

While it doesn’t appear to have many people who like it in Malaysia itself, Neko-chan gives “Congkak” 3 “Meows” out of 5 for being a nice little ghost story, competently acted and told, from a place I don’t usually get to see many films from. You just might like it too, if you are in a mood for a little “horror-lite”. Hopefully, it’ll be a different case when “Susuk” get released later this summer…. that one looks really gory!!

There’s a Trailer of course, (thank goodness for Youtube!!) and here it is!!