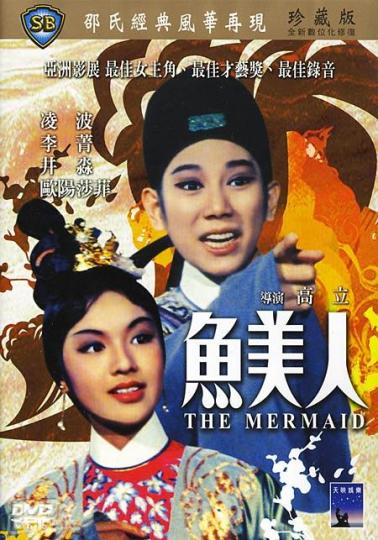 Time for another Review, and this time out it’s a trip back to the 1960’s and the heyday of the Shaw Brothers with a look at the sumptuous 1965’s Huangmei opera film “The Mermaid” based on the 16th-century Chinese play “A Tale of Goddess of Mercy’s Fish Basket (觀音菩薩魚籃記)”. A virtuous scholar, a beautiful Carp Spirit Fairy, romance, comedy, mistaken identity gags, and oodles, and oodles of singing. Yep… they don’t make them like this anymore…

Our synopsis? Well it sorts goes like this: “A scholar named Zhang Zhen who finds himself taken in by the Prime Minister after the death of his beloved parents. Soon enough, Zhang Zhen falls in love with his benefactor’s pretty, but haughty daughter, Peony. But, there are two problems preventing a union between the two. For one, her father simply won’t approve of the match, and  Peony herself has no interest in the lowly Zhang as a suitor to begin with!

Stuck inside with nothing to do but study for exams, Zhang tries to brighten his spirits by feeding fish in a nearby pond. On one fateful day, a carp fairy transforms itself into a beautiful woman who just so happens to look exactly like Peony! Plenty of misunderstandings and misadventures ensue when this lovely Carp Spirit tries to adapt to life on the surface while trying to woo the scholar to whom she has lost her heart! Who will Zhang choose – his first love, Peony or the vivacious mermaid?”

Yep… sweet, sweet romance and magical hi-jinx abound. But will I be able to sit through all the singing and dancing? Guess we’ll find out, won’t we? 😉