Next up in this August’s “Martial Arts Mayhem” review series is the 2011’s Japanese Martial Art film “Karate Girl”, with Ryukyu Shorin-ryu Karate black belt Rina Takeda, star of “High Kick Girl”. Japanese Karate schoolgirls? Oh yeah… this wee Catgirl’s certainly on board for this one…. 😉

Our synopsis reads: “Pretty Ayaka Kurenai, is a young girl living an assumed identity in hiding with an adoptive family after her father, a famous Karate Master was murdered and her younger sister kidnapped. Years later her true identity is accidentally revealed when she is seen on TV news using her skills to stop a purse snatching at the cinema where she works. Once again Ayaka attracts the murderous attentions of her father’s killer, Tagawa Shu, now the Supreme Master of an evil Martial Art Empire of deadly karate assassins still desperate to get his hands on her father’s black belt to claim control of the Kurenai family karate legacy. Realizing her true identity, he sends his killers to find her, seize the belt, and kill her once and for all. As she battles for her life and her father’s honor, little does Ayaka dare guess that one of those enemies is Sakura, her younger sister, now trained as one of Shu’s merciless killers-for-hire.”

“High Kick Girl”, while only  a minor little film made on a shoestring budget wasn’t the greatest Martial Art movie ever made, it did have one thing going for it…. Rina Takeda. Pretty and obviously talented with a confident charisma that showed amazing promise, it was only a matter of time before she would get the chance to strut her stuff properly and become the Martial Art movie star she should be. Will “Karate Girl” be her big “break-out” role? Only one way to find out… and that’s by giving it the ol’ “look see”… So let’s all “Read On” and find out, shall we?

END_OF_DOCUMENT_TOKEN_TO_BE_REPLACED 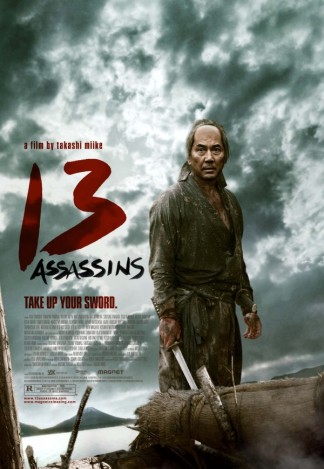 Whew!! Well it certainly took me long enough to get this one written, but here we go with your Favorite Catgirl’s impressions of the new Chambara drama by cult director Takeshi Miike, “13 Assassins”. Flashing swords, bloody death, and a brave stand of a few brave men against seemingly impossible odds…..

Our synopsis? How about this: “The year is 1844. A vicious nobleman rapes and kills with impunity, shielded from punishment by virtue of his political connections. Although the era of the samurai is fading and coming to an end, one honest government official is still able to enlist the aid of thirteen honorable swordsmen in secrecy. Their mission? Nothing less than to assassinate this sadistic lord whatever the cost, before he can seize even more power and become untouchable…. above anyone’s power to keep in check and a threat that would poison the nation’s very soul. With time running out and against impossible odds, these assassins lay a deadly trap for the lord and his army of bodyguards in a booby-trapped village of death, culminating in one of the bloodiest, muddiest sword-fights ever put to film.”

Sound a bit “Seven Samurai” to you too? Yep… this one seems to want to channel the spirit of that old Kurosawa film and lots of other 70’s Chambara classics. You know the ones… lots of stern faced Japanese guys (and even a few girls..) facing the idea of inescapable death to achieve Honor and restore Justice. There’s something primal and heroic about that…. and it resonates through the Chambara film in a way that only the best Spaghetti Westerns ever seemed to truly understand. Mind you… most of the best of the Spaghetti Westerns were even adapted from these old Japanese swordplay films. But… at their heart, both genres were about staring Death right in the face without flinching and going for it full on… even knowing you probably wouldn’t succeed.

So does this one have the “warrior spirit”? One way to find out, and that’s to follow this crazy Catgirl on a journey to Feudal Japan, where perhaps Death came easy… and life was sometimes cheap… but Honor and Duty were priceless treasures beyond value.