This time out… a break from the Asian ghosts, monsters, and kung-fu antics that usually populate the trashy cinema I like to watch. With Halloween approaching, I lucked out and discovered this lil’ gem, a double feature parody of old 40’s serial adventure cliffhangers and 50’s alien invasion films, “Monarch of the Moon” and “Destination:Mars!”.

I ran into this one quite by accident, and was lucky enough to find a copy of the two disc collector’s release of this one by BCI/ Image Entertainment.

So…. is it a nostalgia filled look at the films of old I saw on Saturday mornings? Let’s take a look!

END_OF_DOCUMENT_TOKEN_TO_BE_REPLACED 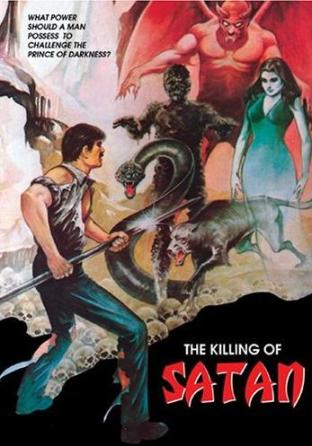 You know how truly weird the films of Indonesia got waaay back in the late 70’s and early 80’s….. Well apparently the Philippine movies from that same period also had some seriously strange stuff going on too… as witnessed by this lil’ piece of cinematography. Neko found this one totally by accident, and when I found out it had black magic, crazy bad “special” effects, snake women, chubby ol’ Satan himself, and a hero who looked like a Mexican heavy from an old episode of “CHIP’s” you just know I had to give it a try….

The synopsis for it reads: “The Killing of Satan” is a Filipino-made horror-fantasy movie about a man who is chosen by his dead uncle to battle the forces of evil. He fights a man called “The Prince of Magic,” who shoots ray beams from his hands, makes heads spin around and hypnotizes people. Eventually, he finally faces Satan himself and engages him in a battle of magic for the soul of his virgin daughter, the pledged Bride of Darkness.”