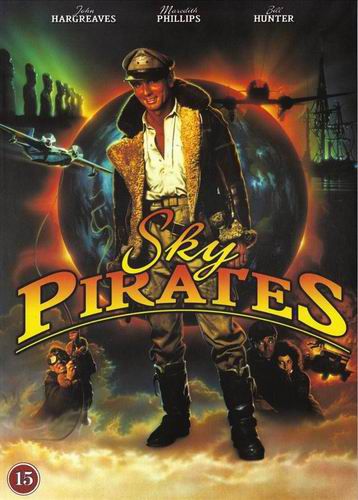 Synopsis anybody? 😉 “WW2 Australia, August 1945. Flight Lieutenant Dakota Harris is called upon to fly a classified mission in an American DC-3 transport from a secret Australian airbase to Washington DC. On board is an American General and archeologist Reverend Mitchell along with one-third of an ancient stone tablet. The plane gets caught in a mysterious electrical storm and crash-lands in a sea, filled with long-lost ships. Rescued and brought back to Australia, Dakota finds himself court-martialed due to a false testimony by his co-pilot Squadron Leader Savage. Dakota escapes and gets help from Mitchell’s beautiful and feisty daughter Melanie. Together they set out to stop the evil Savage, who is after the 3 pieces of the stone tablet and their enormous power when combined together. A power which can be used for good… or for evil.”

World War 2… ancient astronauts… lost civilizations… the eerie heads of Easter Island… the powers of alien antimatter… daring aerial action… two-fisted wise cracking hero… and a pretty female sidekick. Yep. This sounds about right. So what the heck are we waiting for? Adventure awaits!! 🙂

END_OF_DOCUMENT_TOKEN_TO_BE_REPLACED

Time for another review, and this time out it’s for a movie I’ve been anxiously awaiting for quite a while… The new Region 1 release of the independent horror adventure film, “Monsters”. It got a theatrical release here in the US, but it was a fairly limited one…. and certainly never made it anywhere near my lil’ neck of the woods, so this time out, your favorite Catgirl had to content herself with the always agonizing wait for it to make it’s inevitable appearance on DVD. But… finally it’s here at last.

The simple synopsis goes like this: “Six years ago NASA discovered the possibility of alien life within our solar system. A space probe was launched to collect samples, but crashed upon reentry over Central America. Soon after, weird, dangerous new life forms began to appear and half of Mexico was quarantined as an “INFECTED ZONE”. Today, both the American and Mexican militaries still struggle just to contain the creatures… Our story begins when a U.S. journalist agrees to escort a shaken American tourist through the infected zone to the safety of the U.S. border.”

The Trailer makes it look great, and practically all the reviews I’ve read tell me it’s a winner, but as always…. Neko plans to let the movie speak for itself. I just know those of you regulars here at the ol’ Litterbox are as big a bunch of fans for this sort of “old school” alien invasion stuff like me, so you’ll all be wanting to see it as well. If you haven’t caught it yet… and it’s on your list too, it couldn’t hurt to find out what your Favorite Catgirl found when I gave it a watch. Kick back, relax and let Neko do all the hard work…. Hehehehe!!