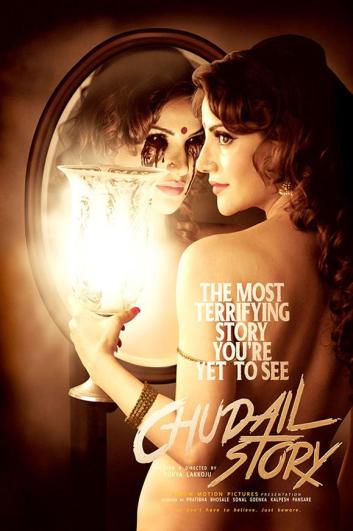 Our synopsis goes like this: “Five friends, namely, Chandu, Goldie, Robby, Riya and Devika set out to take a break from their life and decide to go on an adventurous trip together. But before they reach their destination, their car breaks down in a remote rural area and in a bid to seek help, they take shelter in the bungalow owned by Shashi. While the mesmerizing beauty of this pretty lady attracts the men’s attention, there is an eeriness of sorts behind the mysterious Shashi. Rumors claim her bungalow is the lair of a cannibal witch who lures men to their deaths… can the lovely Shashi truly be this witch? But before the gang of five set out to uncover the secrets of this bungalow, some unforeseen incidents lead them into a trap and then escape isn’t an option for them anymore.”

Doesn’t sound like we’ll stray too far from some pretty standard horror movie tropes this time out, but hey, this wee lady is never scared away by a tried and true old school plot. Still… this one didn’t get a very positive review back in its country of origin, so it’s with a measure of caution that I approached it. (Who am I kidding? An Indian horror movie a with sexy cannibal witch hiding away in a haunted house? Of course I’m gonna watch it… Neko’s just such a lil’ dweeb!! ;))