Time for another Review in our month-long “Frolicking Under The Sea: Mermaid Fantasy Film Festival – August 2016”. This time out? How about an old B&W creature feature starring a young Dennis Hopper in one of his earliest film roles, 1961’s psychological mermaid suspense film “Night Tide”?

The synopsis reads: “While on shore leave, sailor Johnny Drake becomes enamored of Mora, a young woman who works as a “mermaid” at a sideshow attraction. But for Mora it’s no act. She actually believes that she really is a mermaid who is destined to murder men on the night of a full moon. Despite this, Johnny is still captivated by the mysterious woman, however, and begins to suspect that her boss, Capt. Murdock, may have something to do with Mora’s murderous thoughts.”

More carnival sideshow mermaid antics, along with some suspense and a bit of period fun. I first saw this one years ago on Saturday morning TV, and remembered it enough to want to take another peek just for you, o’ Gentle Visitors, so let’s jump in the “wayback machine” and get us some vintage chills and thrills… 😉

Ahhhh…. Saturday morning at my house was a wonderful time when I was a little girl. If I got up early enough, there were always oodles of old movies playing on the glut of cable TV channels filled with lots and lots of B&W horror films from the 40’s right through the 60’s and 70’s. Cartoons were just waaaay to tame for this lil’ “wild child”… Miyuki loved her “creature features”. So much so that often my parents would often awaken Saturdays to find me already up, there in my pj’s lying on the living room floor watching some ghastly B movie and filling my little brain with all sorts of silly notions I could get up to once I was ready to head outside to play. Ummmm? Have I ever mentioned just how crazy a kid I was back then? I have? Oh, good… Hehehe…

So our story gets underway, seaman Johnny Drake (played by Dennis Hopper) is wandering about the boardwalk at Venice Beach and stops into a funky little jazz club where he meets the mysterious beauty Mora (played by Linda Lawson). Although she’s a bit aloof and standoffish at first, the two of them hit it off and after Johnny walks her home to her apartment above the marina merry-go-round. He manages to convince her to see him again for a proper date, and eventually they fall for each other. 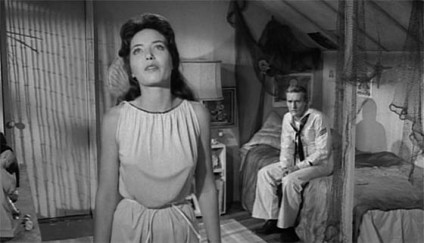 Johnny is happy, but pretty much everyone else around them is wary of the romance, as two of her previous boyfriends have died mysteriously, drowned in the sea nearby. Ummmm?… OK…. That sounds pretty darn suspicious, right? Well to make matters worse, Mora herself believes she is a descendant of the “Sea People”, mythic siren-like mer-people who lure sailors to their deaths. Crazy, right? Well maybe not so much…

Strangely enough, Mora herself makes a living “playing” a mermaid in a cheesy sideshow at the pier for her guardian, the boozy ex-sailor Captain Murdock (played by Gavin Muir). You know the deal… 25 cents a peep at the “mermaid” lounging in the tank. Harmless, right?

Then who is the strange sinister foreign woman (played by Marjorie Cameron) that follows Mora around? Why is Mora so afraid of her? And why is it only Mora or Johnny seem able to see her? Is she one of the “Sea People” come to lure Mora back to the briny depths or just a figment of Mora’s overwrought imagination? Except of course… Johnny sees her too.

Basically our story wants to play coy, and we never really learn just who she is… and that’s OK. This one is less a real horror movie than an exercise in psychological horror. Poor Mora… originally an orphan that Captain Murdock picked up on a visit to the Aegean Isle of Mykonos, he’s raised her as his own daughter and tries to control her by filling her head with tales and legends of the Sea People and the Sirens. After a lifetime of being told she’s some kind of inhuman thing, is it any wonder our poor dear is more than a little neurotic?

But love can fix all that, right? Especially the pure and honest love of an All-American boy like Johnny. Ummmm? Nawwww… Not that kinda movie, people. 🙂

Along with Mora’s further decent into madness, poor Johnny starts to question his own grasp on sanity as he slowly comes to believe Mora’s terrible story. He has nightmares and dreams of Mora as both mermaid and monster and sees his very own death at her hands, but still can’t shake his attraction to her, even with Ellen, the sweet daughter of the Merry-Go-Round operator giving him the goo-goo eyes every time he stops in for coffee and to unload his suspicions and fears to a sympathetic ear.

Eventually Mora loses it… and in a moment of madness tries to drown Johnny while they are scuba-diving together, only to realize what horrible thing she almost did at the last moment. As Johnny struggles to the surface for air, Mora dives deep into the sea, dropping her own tanks and swimming away into the depths to die herself rather than risk any future harm to Johnny from her curse. 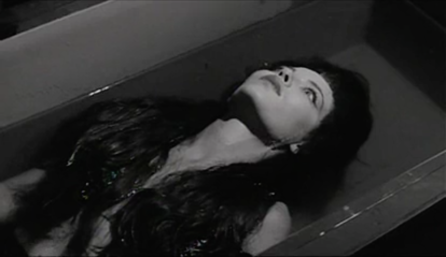 Still agonizing over Mora, despite what she attempted, Johnny returns to the boardwalk the very next night to discover that Captain Murdock has somehow recovered her lifeless body to place back on macabre display in the tank. He admits to having jealously killed Mora’s previous boyfriends in an effort to control and keep her all for himself. There’s a struggle, and Johnny barely escapes being shot to death before the police swoop in and grab them both up.

At the police station, Captain Murdock comes clean, exonerating Johnny, but claims to know nothing of the strange mystery woman, Mora’s stalker. Johnny is allowed to leave, and returns to his ship with the Shore Patrol, after finally connecting with Ellen and promising to return to visit her once things in his life return to normal. Our film ends, with a quick quote from Edgar Allen Poe’s poem, “Annabel Lee”….

Hmmmm? So… not a “real mermaid” movie afterall. Although the film does hint pretty heavily that maybe those legends of Captain Murdock’s were true. It’s more a study in the way the human mind can be fooled by fear and superstition more than any real supernatural source. All in all, although fairly dated by modern standards, it hold up really well and I can see why I remembered it after all these years. To me, it was like an old episode of “The Alfred Hitchcock Show”… which loved these sorts of “maybe it is… maybe it isn’t” kind of stories. (Yes… lil’ Miyuki watched old reruns of that show too when she was a wee girl…. For me, back in the day “Old TV was good TV…” ) 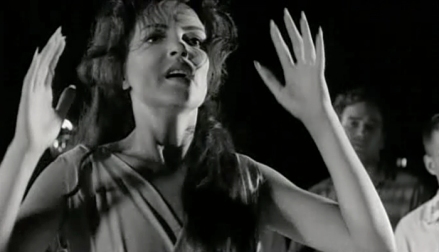 I give “Night Tide” a respectable 3 “Meows” out of 5. Like I say, it holds up pretty well, even today, with competent acting, especially by Mr. Hopper. It’s not hard to see why he’s done so well for himself in the profession over the years, taking what was basically a throw-away B-movie and giving it his best effort. Now that’s a Professional. The cinematography is nice too, reminding me in many ways of “Carnival of Souls”, which came out the following year, especially in the way it presents the Venice Boardwalk by night in it’s vintage Black & White photography. Certain stories are actually helped by being done in B&W and this film is definitely one of them.

This one’s available on plenty of budget DVD’s, but there is actually a nice restored version too done by The Academy Film Archive, so if you want to give it a peek yourself, I’d say that’s the way to go. No muss, no fuss.

Old as this one is, I still managed to find the original theatrical Trailer online, so here it goes!