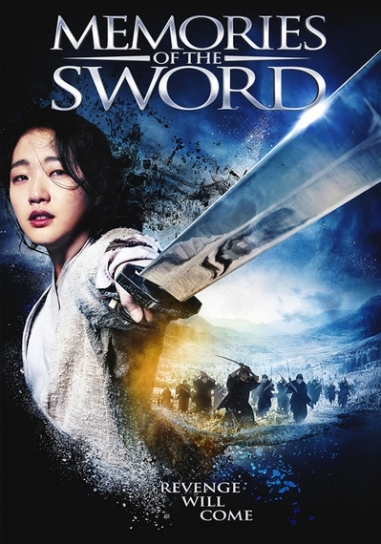 Whoooo!! Boy… The snow and ice sure are blowin’ hard outside my window today, but your Favorite Catgirl is still at it with yet another entry in February’s “Martial Arts Mayhem: Fighting Femmes Festival – 2016”. This time out, we’re off to Korea for a look at 2015’s swordplay film “Memories of the Sword”.

The synopsis reads as follows: “During Korea’s Goryeo dynasty, a trio of heroic peasant warriors is betrayed by one of their own during a violent uprising against a corrupt governor’s tyranny that leaves the greatest fighter among them and his beloved wife dead at the hand of a traitor. Over the next eighteen years, one of them, now a blind swords woman, trains the fallen soldier’s daughter in the art of the sword so she may finally avenge his death.”

After being so darned disappointed by “The Assassin”, I was definitely looking for a good old fashioned Martial Art film with some “girl power” to raise my spirits and help me battle the winter blues… luckily for me, Korea is always willing to answer a goofy Catgirl’s wishes. 🙂 Wanna hear all the nifty details? Then you know what you gotta do, o’ Gentle Visitors…

Yep. Winter hasn’t been very… well… “wintery” this season. At least not until now, when the season is soooo nearly done. Now we’re getting all the snow… and the cold… and buttloads of nasty ice too. It’s weather like this that seems to hit me particularly hard now that my seasonal depression seems to be so darn magnified by my current hormonal situation. All I want is to be a dull goofy lil’ slug and stay inside… with little or no ambition or energy to fight back. Luckily for me… as always… movies are my saviors. They let me travel the world and see exciting and exotic places while my own world seems so stuck in it’s own private Ice Age. Our February festival has helped, and especially when it comes to films like 2015’s Korean swordplay melodrama “Memories of the Sword”. Now this one is definitely Neko’s kind of movie. 😉

So lets see… this one gets underway as our young heroine Hong-ee (played by Kim Go-eun) lives a carefree life in a tiny village at the port of Byukran where her days seem to be filled with frolicsome play in golden fields of sunflowers. We know she’s something special when she playfully displays her amazing Martial Art prowess by leaping over 20 foot sunflowers in a single bound. Oh yes… Hong-ee is gifted…

She’s also a wild little free spirit who wants nothing else but to compete in the Martial Art matches hosted by the powerful General Yoo-baek (played by Lee Byung-hun), his way of finding suitable candidates for his own personal army that he plans to use in his schemes to cement his power at court. But naturally… young girls in the Goryeo era aren’t permitted to be soldiers… You know what that means, right? 😉

Yep. She goes ahead and dresses as a young man, dons a mask and bullies her way into the arena one afternoon to do it anyway. There’s plenty of swordplay and wuxia wire-work, and it isn’t long before the general notices that her impressive skills are eerily similar to an old acquaintance of his… one he badly wants to find… at any cost.

Why you ask? Well, here Neko’s kind of gotta delve into the somewhat complicated backstory of this one in order to explain, so it’s “Spoiler Alert” time for all those of you out there who might want to see this one with all those surprises intact. 😉

So after she fights the current winner Yool (played by Lee Junho) to a standstill, General Yoo-baek first tries to have his men capture her (Yeah… like that’s actually gonna happen… 😉 ) and then he tracks her down himself after she escapes into the nearby city to try her skills himself. It’s another neat lil’ duel that our girl barely escapes from only to have to explain to her blind mom Wallso (played by Jeon Do-yeon) what in heck she was even doing exposing herself to such danger. 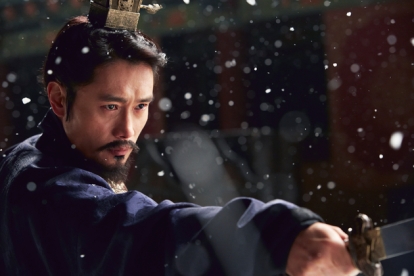 Here’s where our requisite backstory comes in… Seems that our girl Hong-ee is not actually Wallso’s daughter at all. Nope. She’s been raised by that blind teashop owner and trained in all those crazy swordplay and Martial skills just so she can eventually go on that bloody road of vengeance and kill the two people responsible for her real parents deaths when she reaches her twentieth birthday. Guess who they are? Yep… General Yoo-baek is one of them…. and in one of those classic moments of Martial Art movie melodrama, the second turns out to be none other than Wallso herself!!

Say what? Yep.. seems that some 18 years earlier, the blind woman Hong-ee has always known as her mother Wallso was actually Seol-rang, one of three peasant heroes along with Hong-ee’s father Poong-cheon and her lover Deok-gi, now the ambitious General Yoo-baek. The trio were originally responsible for a successful peasant revolt against the tyranny of the local Goryeo Governor of the province. But, at the climax of their success, Deok-gi betrayed them to the government forces in exchange for a position as General of the army. He threatens to kill Poong-cheon’s wife and baby daughter Hong-ee, but before Poong-cheon can save them, he’s reluctantly killed by Seol-rang out of loyalty to her lover. Seol-rang thinks this will save them, but she has no idea how deep Deok-gi’s thirst for power runs, and he slaughters them anyways. It’s then, the heroes broken and the revolt destroyed, that she takes Hong-ee and disappears swearing to her lover that someday Hong-ee would kill them both to set things right.

Awwww crap. Now doesn’t it always suck when you find out that your Mom isn’t really your Mom and worse, that she’s the one responsible for your real parents deaths? Yes, yes it does…

So our story gets it’s prerequisite tragic backstory rolling… and our heroine finds herself having to step up and start that quest for bloody revenge long before she’s ready. Along the way, she finds love in the form of Yool, the young soldier she fought in the beginning, loses her adopted little brother because of her own ill-advised identity theft as part of her “dress like a guy” disguise plan, find out how her Mom got blinded, and finally discovers the real truth of her identity and just who her “real” mother is…. all in about an hour and forty minutes. 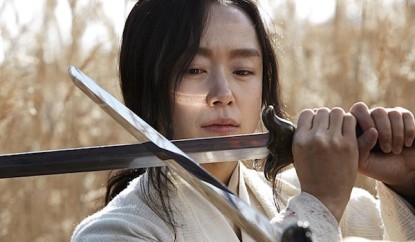 Mmmmm…. and along the way, your favorite Catgirl got her fill of gorgeous scenery, amazing costumes, lots and lots of wuxia combat goodness, and a plot that while complex, isn’t too darn out there story wise to be able to follow it. Just what I was looking for. 🙂

“Memories of the Sword” isn’t perhaps the most original swordplay story to come along, but it certainly ticks all the right boxes for Wuxia film fans. We get craploads of Shakespearean melodrama melded to the wire-fu driven superhero action of the Wuxia genre and served up with competent acting and excellent cinematography that makes for a pleasant and enjoyable movie watching experience. Want some drama? It’s in there. Want a fresh faced heroine willing to go the distance for love and honor? It’s in there. Want lots of beautiful slow motion sword duels with all that gravity defying wire-fu goodness you know and love? It’s in there. Want one of those tragic yet poignantly perfect endings where you even feel bad for the villain? Yep… it’s in there too.

“Memories of the Sword” was soooo much more satisfying a movie for me than “The Assassin”. It’s nowhere as artistic, but as pure movie entertainment, it does the trick perfectly. Neko gives this one a well deserved 3 “Meows” out of 5. Even Carolyn agreed it was a much more viscerally and emotionally satisfying film.

The DVD? Well, we got to see this one on the recent Region 1 release as well, also by WellGo and as with “The Assassin”, it’s a class act DVD wise, having been presented in widescreen letter-boxed format with the original Korea audio and those wonderfully perfect English subtitles a certain Catgirl loves. There’s a Region 3 Korean release out there too, as well as a HK one, but if you are in the US, you can’t go wrong choosing our own domestic version for right around 15$ US.

Of course, as always, there’s a Trailer… Why the heck wouldn’t there be? 😉