Time for another installment of our February “Martial Arts Mayhem: Fighting Femmes Festival – 2016”. This time out? Well how about some “female empowerment” from a somewhat unexpected source, the country of Brunei, with a look at director Siti Kamaluddin’s 2014 “Yasmine”.

Our synopsis goes like this: “Living alone with her strict father, Yasmine is a free-spirited girl, sometimes unruly and even rebellious. When her father tells her she’s been refused a school loan and must study far from her friends, at a grim public college, she takes the news very poorly. To top it off, Adi, her old school’s silat prodigy with whom Yasmine is hopelessly in love, now has his eye instead on her rival Dewi, also a practitioner of that same martial art. So she joins the humble silat club at her new college, building a friendship with her teammates Ali and Nadia. Soon she convinces them to join her in signing up for the same intercollegiate silat competition that Dewi and Adi are participating in, with hopes winning Adi’s affections once more. Yasmine is forced to undertake her training in secrecy, because her father harbors an unexplained contempt for the sport and forbids her any involvement with it. As the first round of the competition approaches, Yasmine is driven to excel at all cost, possibly even the loss of her newfound friends. Eventually, her unbridled ambition, her single minded vendetta with Dewi, and her fixation on Adi will soon push Yasmine to learn the secret why her father wants nothing to do with silat.”

Sound a little like “The Karate Kid”? Well… yes… but being a film from Brunei, I was certainly expecting something a wee bit different. Trust me… Brunei is definitely not a place I really associated with “female empowerment”. Nope. So was I surprised or disappointed with what was on hand? Guess you’ll have to “Read On” and find out, won’t you? 😉

So… when I first encountered this film, I was somewhat surprised by all the positive buzz surrounding it. I mean… it’s a film from Brunei… ummmm… a place not exactly high on the list of enlightened modern societies these days. Heck… the local Sultan’s recent total imposition of strict Sharia Law in all of Brunei means that my sweet and loving wife Carolyn and I would be arrested… prosecuted… and promptly executed by stoning just for being together as a lesbian couple if we ever made the unfortunate mistake of visiting the country. No kidding. (Breathe Miyuki… Breathe… I like to think I’m a fairly open minded woman with a reasonable respect for other people… other beliefs and other cultures… I reeeaaallly, honestly try to be… but this sorta *&#@% is just plain wrong! It hurts and scares me to the core to think about the misery such narrow minded crap inflicts on innocent people. OK… OK… Get a grip and stop ranting Miyuki… 😛 ) Given that… I can honestly say I wasn’t expecting a whole lot of the “warm fuzzy feelings” from a movie featuring a female character trying to be strong and independent in a society that pretty much views women as the possessions of their families or husbands. Wasn’t even sure I wanted to watch a movie from a place like that.  But… I’m a curious, stubborn lil’ goof when it comes to movies…

So I crossed my lil’ fingers, took that leap of faith, and gave it a look-see… and surprise, surprise…. it actually turned out to be be pretty darn good.

It starts off right smack in the middle of some tense Martial Art duel one dark night somewhere out in the rural countryside that isn’t just a polite sporting event, but instead a deadly no-holds-barred smackdown looking like it came right out of one of those Thai kickboxing movies yours truly loves. Before we get to figure out what’s what, the whole thing shift to the warm a sunny world of our film’s heroine Yasmine (played by Liyana Yus) as she awakes to start the morning on her last day of High School. There’s an adorably cute bit where she has to quickly sneak back into her house after a night spent sleeping in her treehouse and have breakfast with her dad (played by “Golden Cane”s Reza Rahadian) before heading off to school. A quick trip in her very own little mini-cooper car, where she and her friends eagerly greet each other to discuss how great college is gonna be once they all graduate. Great for all of them except Yasmine, it seems…. Unfortunately, her father has neglected to tell her that the wonderful Private school all her friends will attend is way out of his financial reach. Instead, she’s going to have to attend a relatively stifling public college without them. D’ohhh!! 😦

Now that doesn’t go down really well. Our heroine gets a bit snippy and resentful at first, showing up at her new school with every intention of continuing her rebellious independent streak to set herself apart from her fellow students. That doesn’t work out well… If her new school is about anything, it’s all about conforming, getting with the program, and not rocking the boat. They’re not having any of Yasmine’s spunky individuality… not her attitude or her bright red hijab… 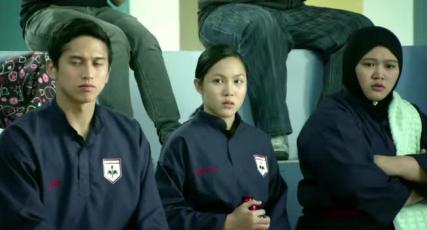 But this one is a “coming-of-age” film and soon enough, Yasmine is trying her best to both “reconnect” with her old friends who’s new life at their new college is slowly but surely moving them away from her, as well as try to find new friends amongst her own fellow students. Mostly though…. she really wants to get back together with an old crush, the hunky Adi (played by Aryl Falak) even though he’s now the big silat star at her old friends new private college. Problem is, he’s got a new girl in his life, Dewi (played by Mentari De Marelle) and it looks like she’s out of luck.

Ahhhhh!! But Yasmine’s got a plan… she decides the best way to get Adi back is to join her new school’s silat team and train for the annual countrywide tournament. One problem? Her school doesn’t actually have a silat team. So, after convincing her new friends Ali and Nadiah (played by Roy Sungkono and Nadiah Wahid respectively) to join with her, she begins her training in the Martial Art of silat. Mind you… she’s got an uphill battle before her, especially given that it’s easily evident that her school’s resident “silat master” Tong Lung (played by Dwi Sasono) is really nothing more than a posturing fraud with little or no Martial knowledge outside of some vague fortune cookie quotations. 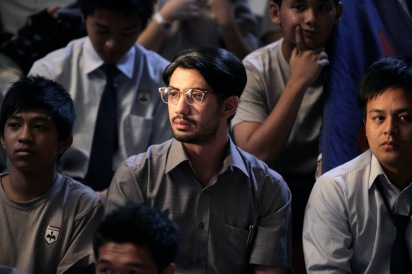 Worse… her father absolutely forbids Yasmine to get involved in silat training at all for reasons we’ll discover later. Surprisingly… for me anyways… Yasmine defies all her father’s attempts to dissuade her, even going so far as to trying to win over her strict Qur’an reading tutor to her side. By now… both Carolyn and I were pretty darn well rooting for Yasmine to succeed and pleasantly surprised to find how much the film wasn’t just a bunch of lame moralist propaganda about how a good dutiful girl ought suppress her individuality to behave in modern Brunei. Yasmine is presented throughout as a well realized character with both her flaws and her virtues while still being very much a believable individual with her own dreams and ideas. Given that, it wasn’t hard to become invested in the story of the film. 🙂

Eventually, after a long search, she and her friends track down a true Master of the Art, confined to a wheelchair by a mysterious injury, named Jamal (played by Agus Kuncoro) who decides to teach them what he knows. But… as much as you want to wish her well, you just know her single-minded obsession to master the art of silat is going to blind her to the consequences of that “win at all costs” approach. Firstly she’s blind to the growing attraction her friend and fellow team-member Ali begins to have for her. Worse… she begins to alienate her new friends and taint her spirit by delving into the more brutal and forbidden aspects of the combat arts from a Dark Master, things meant only for pain and punishment not sport or the true spirit of silat.

All of this leads us along through the expected tournament at the climax as Yasmine finally learns all the important life lessons about friendship, romance, discipline, and even the tragic secret that binds both her father and Master Jamal together and which finally explains his fierce opposition to his daughter becoming a silat practitioner leading to some touching “father-daughter bonding”… Awwwww!! 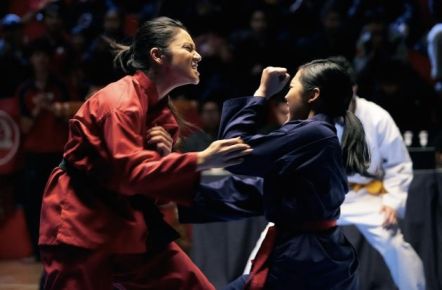 If you’ve already watched “The Karate Kid” then you’ve really kind of already seen the ending it has in store… and trust this lil’ Catgirl, “Yasmine” doesn’t miss a beat to reach pretty much the same place, although in no way was watching this one a disappointment by any means. It’s a really nice movie… and no one is more surprised more than I, just how much I really liked it.

Seriously. I honestly didn’t start out thinking I would. Most of that was due to my misgivings over what little I knew about life in Brunei and the message a film from there might want to send to young women with dreams and notions that weren’t exactly the most socially conforming. Bravo for proving me wrong and making me root for this funny, spunky, and very real feeling young girl. She’s a person I feel I could be friends with if we ever met… even if I don’t share her culture or background. Hey… that’s a start, right? (Mind you… I have to admit this wee lady is still somewhat totally scared about that whole “stoning” thing for we lesbians… so don’t expect me and the wife to visit any time soon… now I’m just saying. 🙂 )

The acting, particularly by our young lead Liyana Yus as our heroine Yasmine, is excellent, with good cinematography and really nice fight choreography by Chan Man-ching, a longtime associate of Jackie Chan. Overall, it’s a classy, well crafted, good looking film, that while not perhaps being the most original plot-wise, nonetheless manages not to embarrass itself or come across as a mere cheap copy. This wee Catgirl gives it a well earned 4 “Meows” out of 5. Not a perfect film, but… for this lady anyway… a surprisingly good one and well worth a look.

As far as I can tell, there isn’t a DVD available for it yet, although I’ll definitely want a copy once there is…. you can watch it like I did by steaming from either iTunes or Amazon or any of the other big online streaming services. Definitely… do it, if Martial Art coming of age films are your thing, you’ll probably be as happy as me.

Trailer? But of course! Complete with English subtitles too!!Doesn’t your Favorite Catgirl always do her best to find you a nifty video goodie to wrap things up? 😉