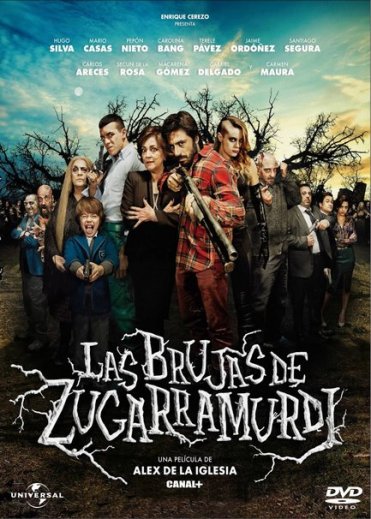 Just when I thought all the witches were hiding this Holiday season and I’d have to rely on doing reviews of older films to fill out things here at the Litterbox, Spain comes to our rescue with the release of 2013’s “Las Brujas de Zugarramurdi” aka “Witching & Bitching” on Region 1 DVD. I’ve known about this one for a while, but given that the original Spanish DVD lacked subtitles, I’d resigned myself to a long search for the subtitles or a release that actually had reliable ones. And you know how those searches can be…. Luckily, somebody must have decided this wee lady needed her Halloween Treats early this year…. 😉

Our synopsis? Well it goes something like this. “When your marriage has you on the brink and your bank account in the red, it’s time to throw all common sense to the wind and rob a “Cash-for-Gold” shop. That hasty ill-conceived decision made by a group of desperate guys leads them into danger as they try to make their getaway to France in a hijacked cab whose route takes them through the impenetrable forests of Basque Country, home to legends of ancient covens and witchery. As fate would have it, they run head-on into a horde of crazed women who hate all men and feed on human flesh. Trapped in their mysterious mansion on the night of the greatest witches Sabbath in a century, our hapless heroes must pull together and win the ultimate “Battle of the Sexes” to save civilization as they know it from the cannibal coven and their ancient Goddess of Evil.”

Slapstick oddball comedy… goofy criminals… vengeful ex-wives… crazy cannibal witches… ancient giant fertility goddesses run amok… a sprinkling of sexy witchy shenanigans… and maybe even some subtle smart comments on the nature and problems of modern “gender relations”. Sounds like we’ve got it all. Wanna know how it all plays out smooshed together? Then ya know what ya gotta do… 😉

This one is an odd lil’ bird of a movie. But then coming as it does from Spanish director Alex De La Iglesia, that really comes as no surprise. His 2010 film, “Balada Triste de Trompeta” aka “The Last Circus” was about the weirdest look at the Spanish Civil War I’ve ever seen, so naturally making a movie about the village where the greatest Witch Hunt of the entire Spanish Inquisition took place wasn’t going to be your everyday exercise in filmmaking.

But all horror and comedy elements aside, “Las Brujas de Zugarramurdi” is also a surprisingly wry bit of commentary on the always awkward ways that Men and Women struggle through as they try to understand the essence of the opposite sex. Pretty deep stuff for a movie that mostly features a plot about hapless doofuses running for their lives from cannibal witches…. 😉

Our story gets underway as a desperate group of unemployed guys pull an elaborately planned heist of a “Gold-for-Cash” shop in central Madrid. Our hero José (played by Hugo Silva) has been driven to this by a combination of Spain’s recent economic crisis and the unreasonable

demands of his ex-wife Silvia (played by Macarena Gómez) to come up with three months worth of alimony and child support for his son despite his unemployed status. And he absolutely has to get that money. Otherwise Silvia threatens to take away his visitation rights with their son Sergio (played by Gabriel Angel Delgado). What’s a devoted dad to do when faced with a situation like that?

Why commit a crazy daylight robbery dressed as a statue of Jesus Christ with Sergio right along for the ride. Hey… it’s not his fault the day of the planned crime fell on his visitation day. Once Jesus, and his buddy, one of the green army soldiers from “Toy Story” get inside, they snag a big ol’ bag of gold wedding rings… some 25,000 of them to be exact… and make a getaway filled with gunfire and car chases with the Madrid police rivaling the best cop movie you’ve ever seen. Well…. OK… maybe the best cop movie you’ve ever seen where “Spongebob Squarepants” goes down in a hail of bullets. (Something I know oodles of you out there have actually dreamed about once or twice… ) Yeah. That sounds right. 🙂

Anyways… given how the robbery goes soooo sooo wrong, it isn’t really surprising to have only José and his son Sergio along with ” Green Army Guy” Tony (played by Mario Casas) make it out. Even so… they just barely escape the cops, given that Tony’s girlfriend shows up to drive away with their getaway car just before it all goes down. Minor hitch….

right? One hijacked cab later though and it’s back to the plan…. with a fast exit across the border to nearby France. This adds cabbie Manuel (played by Jaime Ordonez) and a frightened passenger to round out our little group and get us ready for when things go from bad to scary worse.

As our guys drive towards the basque country along the border, they all share their frustrations and problems with women. Each and every one of them seems baffled and confused and just plain sick of dealing with all the ladies in their lives. It’s not that they don’t love or desire women…. it’s just that to these poor fools, we might as well all be completely alien entities with secrets and agendas they’ll never be able to fathom. Once they start exchanging stories, it isn’t long before cabbie Manuel decides to throw in with these guys in the spirit of shared misery. Oooohhh! Now we’re ready for the witches to show up….

And show up they do. You see as it happens our getaway route to France takes the boys right through the center of the picturesque Basque town of Zugarramurdi where in 1611 the Spanish Inquisition held the largest purges of heretics and witch trials in Spanish history. (Really… No kidding… just check Wikipedia. 😉 ) Yep…. and guess what? All these centuries later… the witches are still here. Oooohh… and still pretty darn determined to overthrow a world dominated by the misogynistic Church of the “One True God” and return their primal Goddess to her rightful place as ruler of the Earth.

A whole village of crazy cannibal hags? Yep. Once the boys get there we discover the witches have been waiting for them. Seems an ancient prophecy has told them that little Sergio is some sort of “Chosen One”… the one male who could

survive being devoured by the Goddess and pooped out alive and whole to lead the witches and betray all the men of the world heralding their return to power. Awwww crap…

Think it can’t be worse? How about if Silvia comes after José to retrieve her son and leads a couple of goofy Madrid police detectives to the village right on the night of the biggest Witches Sabbath in 300 years? Oh yeah… you just know that’s gonna be trouble.

Anyways…. we get the usual bits of screaming and running around in terror… the expected cannibal hijinks… even some frisky sexy witch action in the form of Eva (played by Carolina Bang), the youngest of the witches in Zugarramurdi. Sure she’s a sexy psychotic punk motorcycle riding “Bad Girl” harlot… sure she’s a wicked cannibal witch with unholy powers… but gosh darn it… for some reason José just makes her heart melt into a gooey mess with his helpless puppy act and his unwavering love for his little boy. Yep. It’s love at first sight. A shame wicked witches aren’t

supposed to fall in love…

There’s lots of fun to be had at this point in our movie. We get oodles of wall crawling witches… flying witches… crazy clawing hungry cannibal witches… more running and screaming. You name it. These girls certainly could have been comfy alongside the coven in “Hansel & Gretel: Witch Hunters”, no doubt about that. Overall this part of the film feels like a Looney Tune cartoon melded with “Van Helsing”, but loads funnier. Even though it’s in Spanish, my sweet Carolyn followed things along easily and enjoyed the silly story just as much as I did.

Ahhhh…. and just when you think there’s no way to go bigger and crazier, we get that huge Witches Sabbath and the actual arrival of our nameless Goddess of Evil. All CGI and as big as King Kong with the massive bloated form of a Neolithic Fertility Venus statuette all that was missing was some other Kaiju to give us an apocalyptic monster battle…. 🙂

So? Do our hapless lads survive? Does little Sergio become the “Anti-Christ” and lead the witches to war against all Mankind? Does José end up back together with his shrew of an ex-wife or find the proverbial heart of gold beating beneath Eva’s wickedly naughty bosom? Guess you’ll have to watch the movie to find out!! So there!!

Gotta say… treading that same basic “Men versus Women” battle-of-the-sexes plot idea as “Doghouse” and “Lesbian Vampire Killers”, “Witching & Bitching” manages to be both funny and entertaining without resorting to lowering itself to sophomoric levels of frat boy humor like both of those earlier films did. You actually end up liking most of our unlikely hopeless heroes and as things unfold both Carolyn and I found ourselves rooting for them to win the day. The humor is black at times, but always done very tongue-in-cheek, and for the most part works dead on. About the oddest thing was the romance plot between Eva and José…. I mean Eva is pretty darn evil and… ummmm cannibalistic… for a

love interest, but in true melodramatic fashion manages the tricky transition from “Bad Girl” to… errrr… ummmm… well… “Less Bad Girl”…. with sufficient style to make the ending work. But it’s still an oddly unlikely plot notion… I guess it’s just more of that crazy “Addams Family” feeling that creeps in here at times to make some of the more ludicrous horrific things seems almost funny and kinda… errrrr… endearing? Yep that’s the feeling it has. With that, I feel pretty darn good about giving this one a firm 4 “Meows” out of 5. Can’t explain it… it just kinda grabbed me that way. Just remember though… this lady likes her movies a bit crazy…. your experience may differ. 😉

The Region 1 DVD is great. I’m glad I waited for it as oppossed to the somewhat sketchy Region 3 “Chinese” release I located and sniffed around for a month or so before this one came along. It’s presented widescreen in the original Spanish audio and with excellent selectable English subtitles. There’s some “Making of” stuff and a few other extra too, also subtitled for those so inclined. Definitely a good choice for our Halloween Festival and one I’m thinking many of you Gentle Visitors might want to give a try.

Yep, as always we end with a Trailer just to get you in the mood for some of that ol’ Black Magic…. 😉