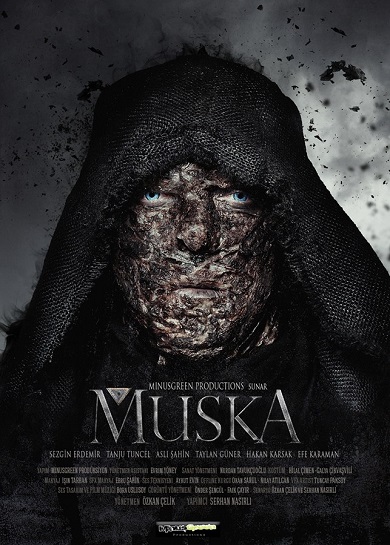 So begins this year’s Halloween movie festival at the ol’ Litterbox with a look at the recent 2014 Turkish horror film “Muska” aka “Talisman”. Witchcraft… possession… spirits returning from beyond the grave… Yep. Sounds like a winner to me… 😉

Our synopsis for it goes sorts like this: “When a newspaper columnist is forced to find new lodgings after the ugly end of his relationship, he ends up at a rundown old house with a room for rent. Hesitant to take lodging in the dilapidated home, he changes his mind when he meets the beautiful woman living next door. Soon he finds himself enveloped in a nightmare from which there will be no easy escape.”

Yep. We’ve got a creepy boarding house with a creepy landlady, the standard moody and troubled child, a seductive siren living just down the hall, and witches…. oodles and oodles of witches. All with moody atmosphere and that all pervading sense of dread that Turkish movies love to ladle on to seal the deal. So then, Gentle Visitor, whatcha waitin’ for? Let a certain crazy kitten tell you all the gory details… you know you wanna…  😉

Now writer/ director  Ozkan Celik’s “Muska” gets going by introducing us to our protagonist Celal (played by Sezgin Erdemir) and letting us know just what sort of person he is. What kind of guy is he you ask? Well… plainly put… he’s a misogynistic womanizing a**hole. Ironic considering his job at the newspaper is writing a romantic advice column if you can believe it…. Yep. We start off the film with his latest meaningless fling with some nameless blonde bimbo being interrupted by the unexpected return home of his girlfriend Selin. That gets him thrown out of his current apartment… well not his apartment, apparently… and results in his mad scramble to fix up some sort of new living arrangement. His best friend Engin (played by Taylan Güner) is reluctant to let him crash at his place given that his current girlfriend finds Celal to be about as appealing as that gunk you find growing behind a toilet in a gas station. Wanna know something? So did my sweetie Carolyn… and so did I….. 😦

I’ve always said…. you usually need a character in a Horror film to be somewhat sympathetic if you want an audience to become involved enough to actually care about them and hope they survive the terror to come. Like I said… you usually need that connection. But there is another way to tell such a story…. just make your main character sooo darn detestable that your audience gets a guilty thrill wishing them to get their just deserts and “Muska” goes down that route all the way to its conclusion. Poor Celal… Neko, kind-hearted Catgirl that she is, almost feels sorry for you. Almost… (No… not really… ) 😉

Without any help from Engin, he tries to worm his way into the apartment… and bed… of sexy co-worker Melis (played by Meric Aral) but gets shot down almost immediately. He’d rent another swinging bachelor pad for himself… if work was actually able to pay anybody for their job. Even his mom can’t bail him out, since he’s already drained that well dry with previous leeching. So what’s a down-on-his luck Lothario to do? Well… when all else fails there’s always some horrendous flophouse for people in his position. Luckily for him, Engin knows just such a place.

The boarding house is a horrendous mess… run by a creepy landlady named Mrs. Aliye (played by Tanju Tuncel). She’s a seemingly harmless old hag with one white cataracted eye and a spare room for rent. Cheap. Plainly put… it’s a dump. Even Celal isn’t desperate enough to want to stay there. Until that is, he catches a look at Aliye’s only other tenant, his prospective neighbor down the hall, the sexy dark-haired Yasemin (played by Asli Sahin). That immediately gets him thinking naughty thoughts the like of which got him into this mess to start with and pretty soon he’s falling all over himself to take the room. Grrr…. idiot. Neko soooo wants you to suffer….

And he does. Fairly soon he’s having those crazy nightmares you’d expect if you’ve taken up residence in a witch’s house. Hallucinations, dreams where he witnesses the hooded witches attending to this crispy critter corpse guy and praying away in some forbidden evil language… His room gets chock loaded with little paper talisman charms hidden here and there… in his pillow… under his bead… on top of his cupboards… and he’s oblivious to each and every one of them, the unobservant doofus. Sigh…. both misogynistic and stupid. Celal is soooo soooo doomed.

By now… he’s really in trouble. Little by little he’s starting to look like hell too. Let’s just say, he’s have much more luck scamming the ladies if he wasn’t starting to look like a plague ridden homeless guy. Somehow though, he’s managing to get closer to pretty Yasemin… who by now we all just know is the sweet lil’ poison apple in this trap… and dumb Celal sooo wants a bite.

He struggles to hold onto his sanity… getting shakier every day he stays at the boarding house… and tries to understand the visions and dreams he’s being visited by. But as you watch, you just know he’s not gonna make it. 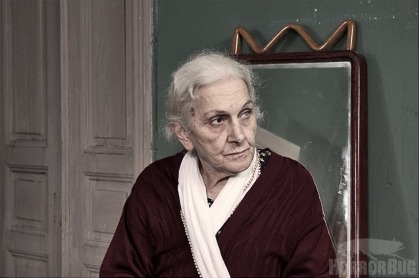 So what the heck is going on? Why Mrs. Aliye is trying with the help of her coven to bring the soul of her dead son… the crispy critter guy… back from beyond the grave so it can possess Celal and steal his body for its own. Seems he’s tired of his eternal torment as a barbecued ghost and wants to live again and return to his widow, Yasemin. Yeah, yeah…. told you she was in on it. No big surprise there, so it’s not really a spoiler. Now, mind you… there is a neat lil’ twist at the end of the film that Neko’s not gonna ruin for you by giving it away. That one caught me by surprise, although knowing how well liked Celal is by all who know him well, it’s hardly something beyond the bounds of plausibility.

Yeah… it’s also no big surprise that Celal doesn’t make it to our films end either. I wish I could say his fate was worse than he deserves, but I’d be lying. Celal is a butthead. I hated him… trust me… watch “Muska” for yourself and soon you’ll hate him too. We all will celebrate his demise….

So, if there’s no hero to root for… no innocents to worry about… and no character you’ll in any way feel sorry for, is “Muska” worth a look? Surprisingly, I’d still say yes. As Turkish horror films go, this ones got craploads of moody dark atmosphere to go around and lots of creepy bits that are effective and well filmed. The acting’s not too bad either… even Sezgin Erdemir as Celal does a pretty darn good job, especially since his character is written to be such a loser. The story? Well… it’s simple and easy to follow… a nice thing given how convoluted Turkish horror can be at times. Even my sweetie got it without too much help from the reasonably excellent subtitles. Definitely a good start for this month’s Witchcraft Theme here at the ol’ Litterbox. I give it a well deserved 3 “Meows” out of 5 for doing its thing and doing it reasonably well.

DVD? Nope… didn’t manage to catch this one on DVD. I don’t think it’s even available in Turkey yet. Instead, I found this one was available for streaming… with english subtitles… free in its entirety over at IMDb while I was looking for information on it. Yep. Free. I kid you not. So if you’ve never seen a Turkish horror movie… and you want a look, then this could be your chance… all without even needing to hunt down that elusive Region 2 Turkish disc. So what the heck are you waitin’ for? Go for it! 😉

To get you in the mood… I did link over the Trailer…. simple and easy. Take a peek!