So… are you ready for some no-holds-barred hand-to-hand in your face Martial Arts action? This wee Catgirl most certainly is, and luckily for me Indonesia is ready to answer my needs with “The Raid 2: Berandal”, the sequel to the surprisingly brutal and well-made original film by director Gareth Evans and again starring the absolutely amazing Iko Uwais in the role of young undercover policeman Rama. More bone-crunching pain… more wild and crazy fight scenes… oodles and oodles of brutal martial art mayhem… yep this lady is ready…. Are you?

Our synopsis goes like this: “Following immediately after the events of “The Raid: Redemption”, Rama (Iko Uwais) is forced to reinvent himself as an undercover cop in order to provide protection for his wife and child. Working for the anti-corruption task-force led by the one person he can trust, Bunawar, he is given a mission to engage himself as an enforcer for a local mob boss, Bangun. Finding a way in through Bangun’s son Uco, Rama must hunt for information linking Bangun with police force corruption. All the while, he harbors a dangerous and personal vendetta for revenge and justice that threatens to consume him- and bring both this mission and the organized crime syndicates crashing down.”

Hands down, “The Raid” is probably one of the best Action films ever filmed… and definitely one of Indonesia’s most impressive movies ever released, so when a sequel was announced, your Favorite Catgirl put it right to the top of her list of “Must Have” DVD’s… and now it’s here. Wanna know if it’s a winner as well? Then what the heck are you waiting for? 😉

Oh, my goodness, yes. I’ve been anxiously awaiting this one for quite a while now. Naturally it showed up my my mailbox the very Saturday before Carolyn and I whisked ourselves off on our whirlwind honeymoon tour of the Western US… so we didn’t get a chance to watch it till we got back. Then… as seems to happen whenever I’ve got a good film to Review… stuff just piled up on yours truly making this a bear of a DVD review to actually sit down and finish for you Gentle Visitors. By now I imagine the more fanatic amongst you have already caught it for yourselves, but I suppose there still a wee bit of room for a certain Catgirl to give you her impressions before the opportunity passes. 😉

Our story starts this time out within hours of the events of the last film. Rama’s criminal brother Andi (played by Donny Alamsyah) seemed pretty much in control of things as that story wrapped up, but even though I expected him to be an important player in the sequel, he’s almost immediately taken out of the story by being ruthlessly executed by Bejo (played by Alex Abbad), another crime boss who quickly steps in to take advantage of the situation and eliminate a rival while Andi’s newly inherited gang is weakened and still reeling from the bloodshed we saw in “The Raid”. Awww crap. I really wanted to see the tension of that brotherly relationship get fully explored this time out as both Rama and Andi continued to work within their respective roles while trying to keep their secrets from those around them. Unfortunately director Gareth Evans wasn’t interested in telling that particular story… instead opting to try to take Rama into a more ambitious and far more complicated story involving gang wars and police corruption.

It’s an ambitious move… and I wish I could say it worked as well as the sparse, simple story of the first film, but unfortunately, when all is said and done, it really doesn’t. Why? Well let’s examine that.

Whereas “The Raid: Redemption” kept it’s fast paced story focused squarely on the action and it’s claustrophobic one-building setting, “The Raid 2: Berandal” tries to shoehorn in just too many side-plots, colorful locations, and characters in a way that none of them are actually able to become fully realized by the films conclusion in a very satisfactory manner.

We have Rama’s superior Bunawar… who basically blackmails Rama into going undercover, yet in no way seems able to provide him with any support or help throughout the film. Yes… yes… he’s supposedly protecting Rama’s wife and son, but we never get any indication that they are even ever meaningfully threatened at all throughout the film. Ahhhh… yeah… Rama’s wife and son… now there are two more characters that you have to wonder about. From a narrative standpoint they don’t even seem necessary to the story… and provoke more questions than answers as the plot unwinds. One nagging point is Rama’s prison term. Supposedly he has to spend 2 years undercover in prison just to get close to a crimelord’s son… something that we see for the first third of our film… and yet even though it’s as if he’s dropped of the face of the earth, his loving wife seems oblivious to that. Say what? Yeah. About the most unbelievable plot idea I’ve ever heard. Considering the lack of any real role for them, it almost would have made better sense to have had both his brother Andi killed, and his family murdered in reprisal to give him a real reason to disappear into Bunawar’s complex undercover scheme filled with a smoldering insatiable need to get the sort of bloody revenge that would have given this story some meat. Nasty… yes… but all good revenge melodrama revolves around such terrible events.

Another change is the shift in focus away from the story being primarily about Rama himself, and to the rival ganglords and their minions instead. Not that they aren’t some of the most nasty and well realized villains you’d ever get for a story like this, but ultimately the story is supposed to be Rama’s and by diluting his screen time and moving him out of the spotlight the story suffers in this wee lady’s opinion. In some ways, it’s almost the secondary characters that the most intriguing throughout. Like Prakoso (played by Yayan Ruhian, who also played head badguy Mad Dog in the original film). Here Yayan Ruhian gets the classic role of hired killer living that bleak dead end existence that has pushed him away from his wife and child, made him a walking ghost of a man with only Misery and Death as his companions. He’s an unrepentant killer and you just know he’s going to end badly… and he does… as one of the film’s multitude of casualties, but I ended up more involved in his back-story and in his character than I ever could Rama’s this time out. That’s a shame too… but it’s pretty much the truth.

Other notable characters are the assassin duo of Hammergirl (My personal fav this time out…) and Baseball Guy (played by Julie Estelle and Very Try Yulisman respectively). Now here’s a colorful couple of characters. Basically these two are only here for the violent eye candy that well choreographed fight scenes that a story like this needs as well as one of the final “boss battles” you know has to happen near the film’s climax. Still… whenever these two are on screen, the action is just plain bloody amazing. They were definitely characters I would have liked to see more back story for… unfortunately they are left fairly two-dimensional and unfinished. What was their story? How did Hammergirl get blinded? Why were they in the assassination business? A flashback or two would have been nice.

So… my disappointments aside, what did I like about this one then? Well, I have to say that even if the story was less straightforward than last time out, it was well crafted. There are a few thorny holes in the continuity… a couple of place where character motivation doesn’t exactly ring true.. but all in all it works in the way most modern gang stories work. The fight scenes are as before, of course, just amazing. We get more of the brutal Indonesian Silat action that made the first film so distinctly different from the horde of other Martial art films out there. Apparently Silat likes to mix it up right in your face, up close and personal, and most of the fight scenes go out of their way to reinforce that impression. We get a prison fight that has our hero Rama face off against a huge mob of attackers… all while trapped inside a toilet stall. Later on there’s another dust up inside the tight confines of a moving car that pits our hero against four other occupants along with gun wielding pursuers in other vehicles that show all the art’s most punishing moves. There are fights in cluttered alleys…. in narrow hallways… in just about every ridiculously confined place you can imagine. Add in a boss battle near the end between Rama and a dual karambit wielding hitman in which our two fighters basically slash each other into hamburger and you’ll get the idea that Silat definitely isn’t a fighting style for wussies…. Oh yeah. They definitely get the action stuff right. 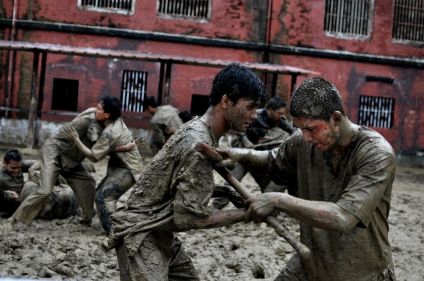 It’s all filmed too with a skilled and polished cinematography that swoops around all that action in ways that seem almost impossible to achieve. Even if there are some quibbles with the story, “The Raid 2” still shows that they definitely do know how to do top notch work in the Indonesian film industry.

Ultimately though, I’d still have to say that perhaps Evans reached a little too far in trying to top the original. The film’s longer running time… 2 hours and 8 minutes… is longer than the first film’s 100 minutes or so, but where the first one has the breakneck feel of a roller coaster to it’s pacing, “The Raid 2” feels as if it drags a bit to fill the space between it’s action sequences rather than maintaining that same adrenalin fueled feeling that “The Raid: Redemption” invoked nearly from start to finish.

Given all that… I still enjoyed the film, as did Carolyn (even if I did make her watch it with me in the original Indonesian with subtitles… I’m such a stubborn lil’ kitten about my foreign films… 😉 ). However, for me at least… “The Raid 2” only scores a good solid 3 “Meows” out of 5 thus proving once again the difficulties of making a sequel that can blow away the original. It’s another good solid action film, just not the breakaway hit that the first one was.

The DVD? Well, the Region 1 release is done widescreen and letterboxed with both the original Indonesian audio and subtitles as well as an excellent English dub for those so inclined. There’s some “making of” features and trailers worth a look and it’s available pretty easily most places you’d expect. If you are a Martial Art movie fan like this wee lady, you’ll probably find it more than entertaining for an evening’s bloody movie watching fun.