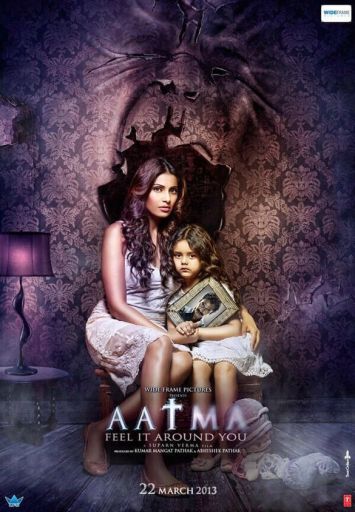 How about some Hindi ghost story goodness? Well this time out, I thought we might take a quick look at 2013’s “Aatma: Feel It Around You”, starring Bipasha Basu, Doyel Dhawan, and Nawazuddin Siddiqui. It’s been another of those films I’ve wanted to see for quite some while, but locating a DVD has been terribly, terribly frustrating indeed. My dogged pursuit has finally paid off, and at last I’ve gotten a look-see at all the ghostly goings-on and can do a proper review.

Our synopsis goes like this: “Abused wife and mother Maya discovers that her precious daughter Nia seems to have invented an imaginary friend… one that turns out to be Nia’s father Abhay, whom Maya divorced and who has been absent from his daughter’s life ever since. This is disturbing enough, given that her violent husband is in actuality dead in an automobile accident, although Maya kept that a secret from Nia. Her daughter, blind to his monstrous side, worships him still and aches for her father’s return. A return that brings his evil spirit back to the Mortal World to seek out his ghostly revenge on Maya and all those he feels responsible for trying to separate them and those trying to keep him from taking Nia with him back to the Other Side.”

An interesting plot… especially given the usually shabby way women get treated in Hindi film. I crossed my lil’ fingers that this time out, the usually misogynistic nature of Hindi film might give way to something less patronizing and let our heroine strike back against the well entrenched gender roles forced on them by a very male centric culture. It’s a horror film… and fantasy usually lets more liberal ideas loose… Did it break free? Let’s find out, shall we? 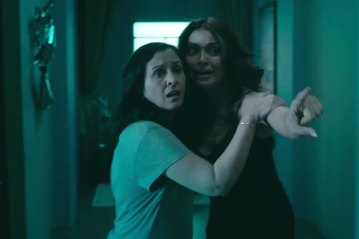 If you know anything about your Favorite Catgirl movie fanatic, you know I absolutely detest those movies where women get to only be the victims. Or those where it’s assumed we’re all air-headed idiots desperately in need of some strong man to show us the way. Worse still are those that treat us as mere possessions… “things” that ought to be glad merely to be “worthy” of being “chosen” as some man’s wife. Or… worst of all… those that tell women that wanting anything better means it’s right and proper that horrible supernatural things can happen to us as repayment… that it’s all “our own fault” when we get tortured or killed. Nothing makes my blood boil faster than that.

Luckily… that’s not the case at all with “Aatma”. Our heroine Maya (played by Bipasha Basu), get’s handed the fairly common crappy deal of having her parents pick her husband… based of course on the utterly stupid idea that he’s got the right job, the right income, and the right connections to make him socially acceptable and a good husband. Unfortunately in reality he’s a violent, irrationally jealous, and downright insane piece of crap…. After he beats poor Maya and sends her to the hospital, they actually realize…. and surprising for a Hindi film… actually admit their mistake and back Maya in divorcing him. Not only that… but they support her taking near complete custody of little Nia (played by Doyel Dhawan), a decision that infuriates Abhay (played by Nawazuddin Siddiqui) to the point where he swears revenge against them all for trying to separate him from the daughter he feels is his most precious possession. Thrown out of court after his crazy threat, he tears off through traffic, only to end up getting killed in a deadly car crash. Maya… who loves her daughter… decides not to tell her of her father’s death, trying to spare her feelings and not tarnish her memories of the father she loved.

Nia keeps waiting for her absent father to return… not knowing he’s gone forever. Eventually weird and eerie things start occurring as Abhay’s spirit… his “aatma”… is drawn back from beyond death by his daughter’s love. Unfortunately he’s still an evil, crazy, brutal thug… and he’s decided that he’ll have his daughter back if he has to kill her and drag her soul with him to the Other Side. Oh…. and he really… really… wants to hurt and punish Maya too for her “betrayal”. Awwww crap….

So begins the ghostly assault on Maya and the rest of our cast. It goes pretty much like you’d expect, with Abhay’s ghost killing everybody who either annoys his precious little girl… like classmate and bully Paras who picks on her at school or her strict teacher Mrs. Sinha who has little patience for Nia’s talking to invisible imaginary people in class… or anyone trying to aid Maya like her mom or a helpful sympathetic Hindi priest (played by Darshan Jariwala) .

Our priest does what he can before Abhay kills him… and it isn’t much. He does explain Abhay’s return, telling Maya that the bond of love between Nia and her father brought him to the Mortal world… and that only that same bond of love between Nia and her mother prevents Abhay from just stealing Nia away. Before he can do that he’ll have to sever that bond somehow and get Nia to agree to come away with him. Ahhhh… and he also tells her that no mortal being can fight an aatma and have any chance to win. Ummmm… that isn’t good…

By now, the body count has the police involved in the form of Inspector Raza (played by Jaideep Ahlawa) who knows something creepy and supernatural is afoot, but who is powerless to act on his suspicions by virtue of needing to follow modern police procedures that have no room for the weird or the supernatural. He spends a lot of time throughout most of the story trying to coax Maya into admitting to him the real truth behind her problem… although what he thinks that will accomplish is never really explained. Eventually he’s forced to arrest Maya for the murder of her closest friend, a frame engineered by Abhay to have her separated from Nia long enough for him to convince his daughter that her mother doesn’t really love her after all. By then, nobody believes her but Raza, and so she gets hauled off to the insane asylum and thrown into a rubber room.

Killing Maya’s mother and the priest, Abhay nearly succeeds too… but it’s “Spoiler Alert” time, as our film’s ending nears it means Neko’s gonna have to risk telling you how this one ends to properly wrap it all up. Remember the priest’s words from earlier? “No Mortal being can defeat an Aatma”. Yep. Maya makes a terrible decision, and trapped in a sanitarium without any hope of escape, she kills herself by beating her head against the wall so that her spirit can seek out Nia and fight Abhay on equal terms at our story’s climax. Does it work? Well we do get a happy… if somewhat bittersweet ending… so let’s just say this wee Catgirl’s belief in the power of love to defeat evil remains intact. 😉

This one was actually a pretty good little film, all in all, and I’m wondering why it took so darn long for me to find a copy to watch on DVD. The one I did find on eBay with English subtitles turned out to be a somewhat suspiciously dodgy one… most likely a bootleg… so I can’t really recommend you rush right out to get a copy for yourselves. I do still want a better copy, so once the “Movie Fairies” smile and one pops up I’ll grab another for sure. For a Hindi film, it was a rare chance to see a strong female heroine strike back and prevail against against the usual casual cultural misogyny of Indian cinema. (Nothing personal guys… I actually like and do watch a lot of Indian film, but in many ways it’s so subtly pervasive that the Hindi audiences themselves probably don’t even notice it… and that’s the real problem…) I can give “Aatma” a good 3 “Meows” of of 5 for being a simple, and overall entertaining bit of horror film storytelling. So… hurry up and release a proper DVD… I’m waiting for it!

And while we wait… here’s a look at the Trailer to whet your appetites!