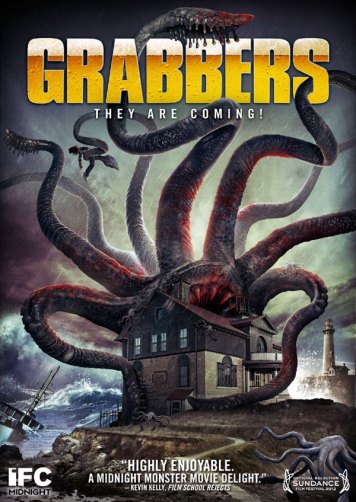 Well… I know I’ve fallen behind yet again but here we finally are once more with another Review… this time, with a peek at one of the two films we saw at Sandra’s over Thanksgiving with the family. Yes.. yes… it seems now that I’m soooo darn loved and accepted by those wonderful folks that now they too will even put up with my terrible, terrible tastes in movies just like my sweetie. 😉

So what, pray tell, did I inflict upon them for our “Family Thanksgiving Movie Fest 2013”? Why the recently released Irish Monster Movie “Grabbers”….

The synopsis? How’s this: “On small, remote Erin Island, an idyllic fishing village off the coast of Ireland, charming but somewhat work-shy Guarda officer Ciaran O’Shea, is tasked with greeting Lisa Nolan, a straight-laced no-nonsense by-the-book young female officer who has arrived from the mainland for a temporary two week duty posting. Not that there is much for them to do, aside from dealing with the occasional drunk, and that’s usually O’Shea himself. But strange doings are afoot: first the crew of a fishing boat disappears, then whales start appearing dead on the shore, and finally local lobster man catches a strange tentacled sea beastie in one of his traps. Soon it becomes clear to O’Shea and Nolan that there’s something big out there, and that it’s hungry. It’s time to rally the villagers, arm the troops…and head to the pub.”

Sounds a wee bit like “Tremors”, eh? Oh yeah… well big honking tentacle beasties worked in that one so I suppose it’s only fair to see if adding some drunken Irishmen to the plot works even better. I was certainly game, and I knew my new “nephew”, Adam would be happy with some crazy monster fun. Heck… my sweetheart Carolyn would just be glad for a movie where they speak English… even if it’s with an accent. 😉

Wanna find out how it all plays out? Then just kick back and “Read On” for all the details! 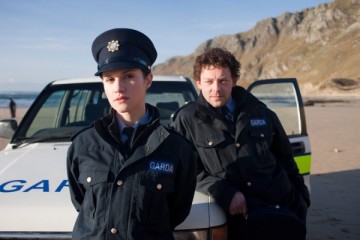 Our final night at Carolyn’s Sister’s place over Thanksgiving this year was spent having a goofy fun lil’ pajama party… with movies and snacks and loads of silly family fun. As “official movie geek”, naturally yours truly got tapped to pick out the evening’s movie choices… my only limit being that the DVD’s had to be something we could grab right then at the Mall. Thankfully the Movies Fairies were kind and provided me with ample choices in recently released goodies. This one was an easy pick for me.  I mean…. “Amphibious bloodsucking tentacled sea monsters”… c’mon… when you’ve got those in your movie, you’ve got it all, hehehe!! (Mind you now… that’s not a given for everybody, of course, but this wee Catgirl ranks such things waaaay high up on the list…  🙂 ) 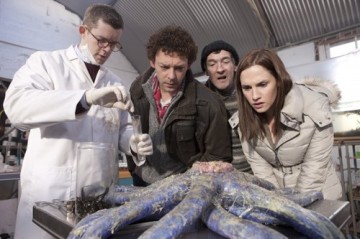 “Grabbers” certainly delivered those and more. We begin our story with the standard “Meteor from Outer Space crashes to earth with Hideous Things inside” plot starter and immediately slip into a quick bit of hungry space monster fun as a group of unlucky fishermen recreate their own version of “Deadliest Catch” without the stupid crab fishing and testosterony bitching to slow things down. Just a quick snack to get things rolling, and then it’s off to the island to meet our hero, Ciaran (played by Richard Coyle) local police constable as well as lovable town drunk. He’s waking up next morning pissed to the gills with the mother of all hangovers and just plain not ready to handle meeting his new partner, Garda Lisa Nolan (played by Ruth Bradley) fresh in from the Mainland to start a two week posting on Erin Isle while his boss is off on holiday. Young, idealistic, and spit-and-polish from the tips of her toes to the top of her official cap, she’s definitely cut from a whole different cloth than Ciaran. At first glance she’s definitely not impressed with her sloppy partner’s demeanor and lack of discipline, but somehow you just know she’s our movie’s “Love Interest”, and that as improbable as it might seem, she’ll end up romantically entangled with our hopeless doofus by film’s end. Fighting vampire sea monsters from outer space…. nothing like a little of that to get those romantic juices bubbling, eh? 😉

Those monsters are basically big ol’ balls of tentacles surrounding a rather grisly toothy orifice that houses a projectile bullfrog-like tongue with a gnarly hollow spike on the end. Just the sort of thing for skewering victims, pulling them in, and sucking out all their blood. If you are into that sort of thing… and these guys certainly are. So…. what’s the big Alien Invasion plan? Ummmm…. actually there really doesn’t seem to be one. Nope. Our squishy slimy monsters are just here by some sort of cosmic accident and seem only want to mate with each other, hatch out a whole swarm of lil’ tentacle things and eat up all the Earthly critters they can snarf down. Simple, eh? 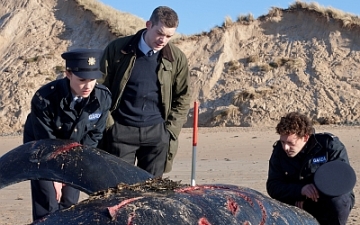 But the monsters aren’t really the main characters in our story… just annoying and deadly set dressing for a story that’s more about Ciaran and Lisa and all the other colorful characters of Erin Isle. Characters like Paddy Barrett (played by Lalor Roddy) local fisherman and town drunkard of legendary repute who actually manages to catch the female alien monster in one of his lobster traps and proudly boasts to his friends at the pub about how he’s “got a wee sea beastie in my bathtub”. Then there’s Dr. Adam Smith (played by Russell Tovey), the local marine ecologist who thinks Paddy’s “Grabber” might just be the zoological find of the century… when he’s not trying to make time with pretty Lisa. Add in a kooky bunch of publicans and the prerequisite parish priest and you’ve got about all the stereotypes needed for a good old fashioned monster movie the way they used to make them.

So… there’s no “big invasion” in the offing… but our creepy critters do get up to the basic monstrous task of creeping about eating the locals when they can catch someone alone and laying their eggs here and there about the island. Thankfully although incredibly resilient and nearly unkillable, the monsters are restricted by needing to stay wet or they go into a catatonic state resembling death… but eventually an approaching Atlantic storm promises to let them roam about at will as rain drenches the isle. Awwww…. crap, eh? Luckily by then, the one weakness they do have gets revealed in time to save the villagers from becoming nothing more than tender vittles for our hungry horde. Alcohol. It’s a deadly systemic poison for the Grabbers… and thankfully polluting their bloodstreams with copious amounts of it is the one thing most of the villagers are really good at. 😉

This is the basis of much of the humor of “Grabbers”. Yep. Nothing enlightening or new… just the usual jokes and stereotypes about drunken Irishman, but hey…. I honestly didn’t expect high drama when I picked this one out. For the most part, it’s all done in good fun and mostly works. The romantic story plot stuff between Ciaran and Lisa isn’t as cute and touching as I might have liked, but then this wee Catgirl really enjoys all the soft and sappy bits like that. I’m just a romantic softy…. 🙂

“Grabbers” mimics the granddaddy of all “retro” monster flicks, “Tremors” for the most part but with a much more modest budget. Modern CGI effects definitely help “Grabbers” look like a bigger movie than it is, but if you compare the two directly it’s not hard to realize that it’s a less polished film overall. Simple story… simple characters… and the easiest, most obvious humor do work here, but honestly I have to say they don’t add up to the experience of that earlier monster film classic… at least for this lil’ Catgirl. Mind you… Adam absolutely loved it, ( And Aunt Miyuki definitely scored herself more “Cool Aunt” points for picking it for sure… 😉 ) and if you’ve got a wee monster movie fan in your life looking for a neat lil’ movie to watch this one would certainly do the job. However… jaded older viewers will probably left wanting more.  Ahhhh well….

The Region 1 DVD comes widescreen, in English language of course, easy to find at most places for right around 10$ US. All in all a fun bit of monster movie action/ comedy but nothing you won’t have seen before. Still… the family and I did have plenty of fun watching it together, so it earns a safe 3 “Meows” out of 5. Yep… that sounds fair.

Oh, yes… and naturally a certain silly Catgirl’s “grabbed” you a Trailer for this one to finish things off properly. Filled with all the alcoholic monster movie fun you could want all crammed into one two minute clip.. Enjoy!! 😉