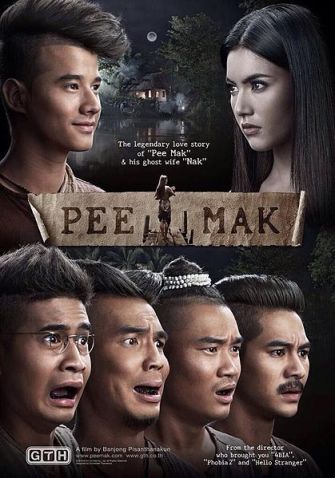 It’s off to Thailand this time out for a look at 2013’s version of the classic Thai ghost story of Mae Nak, the horror comedy “Pee Mak”. Reaching a bit, perhaps for inclusion in our “Haunted House” theme for this month, but a classic ghost story almost always has some sort of haunted location…. and this wee Catgirl certainly loves classic Thai horror. 😉

The quick synopsis reads:“Once upon a time during the King Mongkut Era during which Siam was still plagued with wars with neighboring kingdoms, Mak was drafted to serve in a war against foreign invasion, forcing him to leave behind his pregnant wife Nak alone at home in the village of Phra Khanong in Bangkok. In the life-or-death front line he met four soldier comrades who later became his best friends. Meanwhile, in Bangkok his wife Nak painfully struggled to give birth to their baby alone. After that rumors started circulating around that Nak had already died in labor and was now a ghost haunting the house and waiting for her husband’s return. At night, villagers in the neighborhood would hear her sing a lullaby to help her son to go to sleep, causing hair-raising chills up and down the spine to the villagers who lived nearby. When the war was over, Mak invited his friends to stay over at his house and meet his beautiful wife Nak. After a series of uncanny events, his four friends and some villagers worried for Mak’s safety so they tried to tell Mak that his wife was already dead.”

A little creepy stuff… a little funny stuff… and some sweet romantic stuff… I’m thinking we might just have a winner here. But… as always… the truth is in the watching, so let’s not waste any more time and get right to it, shall we?