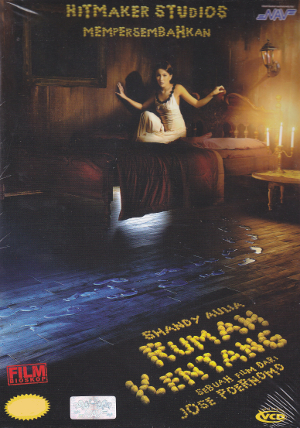 Your Favorite Catgirl has another odd one to start off this year’s Halloween Movie Review festival… and in keeping with our “Haunted House theme” for this month, I’ll start off by giving you my quirky impressions of the 2012 Indonesian horror goodie “Rumah Kentang” aka “House of the Potato”. Yep… that’s right… haunted potato horror. Just when you think the Indonesians might just run out of crazy things to haunt people they always manage to surprise you. Hehehehe!! 😉

Our synopsis goes: “When her mother passes away, Farah is forced to return from Melbourne to Jakarta in order to care for her sister Rika. However, things are more complicated than they seemed for Farah soon discovers that there are two problems that she has to resolve: caring and providing for her and her sister and finding a new place to stay as their current home is rented after her mother sold their old home in order to allow Farah to study in Melbourne, which is now too expensive for her to pay by herself. A silver lining comes in the form of her mother’s will that informs her that they are still in possession of her mother’s first house, which she deemed was a good investment due to its strategic location among the upper class, but has failed to be sold due to the fact that the place is haunted. The two sisters move in, but strange things start to happen… “

Killer ghostly potatoes? Nope it’s not a joke, but is in fact a very real movie.With a silly basic idea like this, you just know your Favorite Catgirl’s gotta quench her obsessive need to see it…. and you, o’ lucky Gentle Visitors can let me tell you all about it so that you won’t necessarily have to. Sounds like a winning idea to me… So watch ya waiting for? Grab your crucifix, your Holy Water, a sharp mystic potato peeler, and some sour cream & chives and let’s get on with it, shall we? Goofy scares await!! 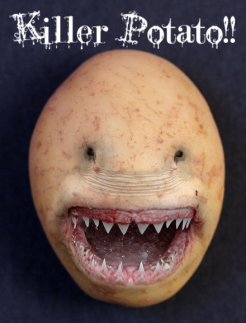 Well. This wee lady has seen her share of haunted banana trees… haunted toilets… satanic mirrors… murderous living dolls… possessed refrigerators… ghostly cell phones… and just about every other goofy supernatural menace Asian film can throw at me, but… apparently… I just haven’t seen it all. How about some deadly killer potatoes?.. Really? Apparently so… although in my experience… with the exception of the specimen to the left… for the most part potatoes aren’t frankly all that scary. 😉

Still…. Oddly unconvincing supernatural menaces aside… our story this time out gets going as a young woman, Sabrina, brushes her hair slowly by candlelight in front of a mirror, part of a ceremony we learn, to allow one to be able to see the supernatural world. It’s a shame that doing so make you vulnerable to the attentions of the spirits that move unseen around haunted places…

and even more unfortunate that there’s no ceremony to remove that power of “Second Sight” once you have it…. something that foolish Sabrina learns at terrible cost after a party game of “jelangkung” with some friends invokes the terrible spirit inhabiting her family’s rented house… the dreaded “Rumah Kentang”.

But Sabrina’s untimely demise merely sets the stage for the bulk of our story… and the rules that our supernatural menace must adhere to as we then follow our film’s real heroine Farah (played by Shandy Aulia) as she returns to Jakarta from Australia to take charge of her sister Rika (played by Tasya Kamila) following the death of her mother in a tragic car accident. With serious money problems, they are forced to move from their family home into a mysterious house still owned by their 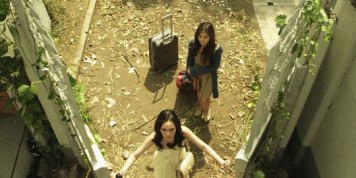 mother’s estate in Dharmawangsa that has a somewhat checkered past and a reputation for supernatural goings on. It’s not their first choice mind you… but selling the property has proven to be difficult and with no other real prospects, it turns out to be their only choice in the short term. Once there… it isn’t long before they discover the reason for the place’s nickname… “The Potato House”.

Ummmm? “Potato House”? Yep. Seems the locals are scared silly by the place. Story goes that if you pass by it… late at night… you can smell potatoes frying. Scary? Apparently so… although…. when the wind is just right, this wee Catgirl herself experiences the very same thing on lonely summer evenings when the wind is just right and blows through my bedroom window from the direction of our local Burger King. Hmmmm? I wonder… Maybe the Kentang ghost works the night shift at the take-out window…. “Apakah Anda ingin kentang goreng dengan itu?” 😉

But I ramble on. Poor Farah has a much worse time once her traumatized sister starts seeing and hearing weird things in their gorgeous new house. Seems… along with her post-traumatic stress from the accident, she’s one of those people blessed.. or cursed.. with the natural power of “Second Sight”. Being in a haunted house with a vicious angry ghost is about the worst place she could be… especially since her “sight” also makes her the victim of it’s attacks.

Eventually that lands her in the hospital… in a coma, beaten and bloody. Money already a problem… the house unsellable… Farah is at a loss for what to do until her boyfriend Arman (played by Gilang Dirgahari) returns from Melbourne to help out. Ahhhh… our story’s prerequisite love interest. A shame he takes nearly an hour to actually show up. He’d be a big help too… except that goofy Farah… wondering if her sister was actually seeing ghosts or merely crazy, has performed that stupid folk ritual to be able to see ghosts. Oh yeah… so now she’s a target too. D’ohhh!!

She experiences all the stuff our evil potato ghost can throw at her… making virtual “carpets” of potatoes fill rooms (Handy as a party gag I’ll bet… Definitely the supernatural power all the other ghosts are envious of… 😉 ), moving stuff around, making funny noises at night, ringing her doorbell late at night just to mess with her head. Ahhhhh and smacking her butt around like Mike Tyson at a Title Fight in Vegas.

Naturally Arman can’t let Farah suffer alone… so pretty soon he’s performed that dumb ritual as well and is getting his own share of ghostly butt-whupping too. Not really all that helpful I suppose, but at least now poor Farah isn’t miserable alone. But what is our cranky spirit so darn peeved about? Well… eventually our heroes call in a shaman to try to exorcise the ghost… and although he fails, it leads them to discover that the ghost was once a little boy killed by his family’s evil maid. She boiled the poor little boy alive in a giant wok full of potatoes in the creepy rear kitchen of the house… reducing him to a soup that she fed to his unsuspecting parents before making her getaway. Ewwwwhhhh!!! 😦

Arman gets the great idea that it’s the wok that’s actually haunted… not the house… and that all that is needed is to dispose of that big ol’ wok and things will just sort themselves out. A neat idea… but trust this Catgirl… it’s never that easy in one of these stories….

So… will Rika wake from her coma? Will the vengeful ghost be put to a peaceful rest? Will Farah and Arman find happiness? Now.. now… Neko’s not going to spoil things, but let’s just say… the “potato ghost” ends up being a lot tougher customer than the whole idea first sounds like and it’s this wee Catgirl’s opinion that nobody should ever incur the wrath of any ghost possessing the eerie powers of a root vegetable…. 😉 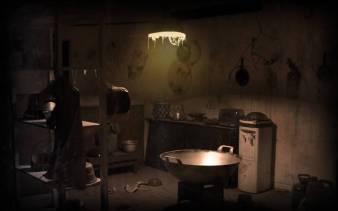 My overall reaction? Well. Given that the premise has to be about the wackiest I’ve encountered in a long while, it actually didn’t end up being all that bad. The story.. the pacing… the acting on hand… all were pretty darn good for a story this basically silly. I really ended up enjoying myself once I got over the giggling about the “evil potato” idea. I can honestly say that in this wee Catgirl’s honest opinion, “Rumah Kentang” earns a good basic 3 “Meows” out of 5. Mostly for having the guts to tackle a story like this as a serious one and not stuffing perennial  horror comedy stars Rizky Mocil or Dewi Persik in just to pad things out with a lame comedy side-plot. Not that I don’t enjoy their antics once in a while… but trust me… a little of that sort of thing goes a long way. Once in a while a good simple scary ghost story is all this lady wants. Even if it’s the “Potato ghost”… 😉 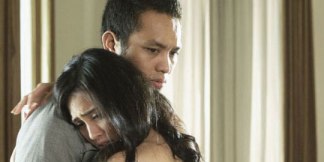 The DVD? Well, since my usual source for actual Indonesian DVD’s has dried up, I caught this on on the Malay release by Speedy presented Region 3 Widescreen in the original Indonesian language, with good adequate understandable English subtitles. A pretty good choice, and certainly budget friendly at 8$ US. Definitely my recommendation should you also find yourself unable to resist the lure of the legend of the Potato ghost… (Go on… you know you wanna see this one… Nobody will laugh at you. 😉 )

Trailer? But of course! Complete with all the scary evil potato goodness anybody could want!! 😉