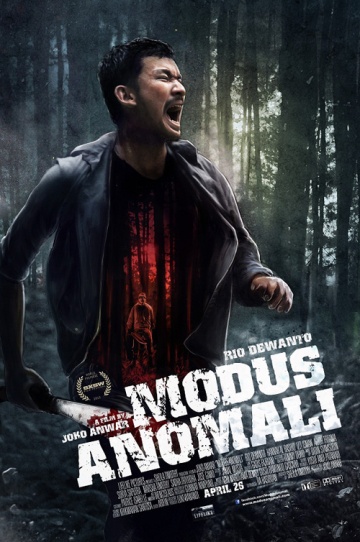 Whoo-hoo!! This wee lady has scored herself a nifty new copy of Indonesian filmmaker Joko Anwar’s  latest effort, 2012’s suspense/ chiller “Modus Anomali”!! Now your Favorite Catgirl’s been a fan of Mr. Anwar’s work for several years now, and once word came out waaaay back in 2011, that his latest film was going to be done completely in English language…. well… naturally I began my dogged pursuit of a copy of any DVD release available without further adieu. Three years later… and it’s mine. Obsessed? Nawwww… I prefer to think of myself as a dedicated fangirl… 😉

The synopsis for it goes like this: “A man, without memory, awakens buried in a shallow grave alone in the forest with no idea of how he got there. Soon he comes to suspect that not only has an eerie inexplicable fate overcome him, but also a pretty wife and children whom he no longer even remembers. With only a wedding band and a photo of his family to guide him, he must risk it all to save them from whatever horrors lurk within the seemingly empty forest before it is too late… too late for them all.”

Oh yeah… now this one sounds pretty darn good. Joko Anwar has proven his talent to me before with such films as “Kala: Dead Time” and “The Forbidden Door” and so this wee Catgirl had no doubt he’d hit another home run with this effort. My only problem was scoring a copy of the film for my lil’ self. Indonesian DVD’s aren’t all that easy for me to get these days but… thankfully… it seems he’s a really big deal in Germany (where this one has the impressively “Teutonic” sounding title “Modus Anomali – Gefangen im Wahnsinn”) as well as at home in Indonesia, so with the recent Region 2 PAL release of this one I was all set for an evening’s movie watchin’ thrills and chills. 😉

So watcha waitin’ for Gentle Visitors? Let’s “Read On” and find out all about this one…!! 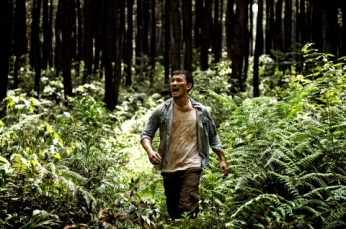 My quest to snag this one led me a merry chase indeed. My most readily accessible sources for Indonesian DVD’s themselves have dried up in those last 3 years with first the disappearance of Internet retailer Esindo here in the US and the closure of Sensasian over in Malaysia. It had been getting pretty darn difficult to track down anything from that part of the world unless it managed to finally get released here in the US itself. So it was with this one.

Luckily for lil’ ol’ me… Indonesian film is big in of all places, Germany. Ummmm? Germany? Yep…. no kidding. Not exactly certain why, but quite a few Indonesian horror films make their way to the land of lederhosen, bratwurst, and glockenspiels. Go figure. At least that makes them available to me through Amazon and thankfully the Germans usually subtitle them into English… (Yeah… kinda goofy I guess but hey, whatever works…. 😉 )

This time out, director Anwar looks like he’s finally decided to make that big stab at making that international breakout film festival hit that will move him from the relative cult obscurity of the Indonesian film scene to some recognition in the broader world cinema business. It’s a laudable notion and one that this wee Catgirl thinks he well deserves on just the basis of his last two film efforts, but… does this mean he sacrificed any of his uniqueness in pursuit of that goal and lost that quirky edge that made me notice him in the first place?

Thankfully no. “Modus Anomali”, while at first glance seems merely another simple exercise in suspense film-making, is filled with much of the same odd jarring notions that made his last film, “Pintu Terlarang”, such a bizarre viewing experience. Now… in all fairness, it must also be admitted that despite best efforts this one doesn’t quite reach the level of that earlier effort, at least in my opinion, but I can honestly say it was still an excellent evening’s entertainment at my lil’ apartment.

So what the heck is the story all about? Hmmmm… now here we have a bit of a problem, Review wise. The entire plot hangs on one of those big “twist” plot elements…. and going into any real details would definitely ruin things for any of you Gentle Visitors intrigued enough to hunt down and watch this one for yourselves. Wouldn’t want that now would we?

If you read the quick synopsis at the beginning, then you’ve got the basic idea…. Our story involves pretty much one man’s terrible ordeal at the mercy of an unknown killer’s sick murderous games. Stick our protagonist waaaay out in the lonely woods alone… throw in some drug induced amnesia…. make our hero grope about for the puzzle pieces of his forgotten life all the while as he tries desperately to save the family he can’t even remember and you can see there’s some real potential for serious nail biting suspense. Some pretty nasty gory horror elements too… but mostly “Modus Anomali” wants to grab you with the idea of suspense first and foremost.

There’s a small cast in this one… and that greatly aids rather than hinders our story. We jump back and forth between our “everyman” hero John Evans (played by Rio Dewanto) and his two children (played by Aridh Tritama and Izzi Isman) but the story mostly wants to center on John as he struggles to cope with this surreal situation, save those children, and somehow come out alive. Rio Dewanto carries this story…. and without him it would have fallen apart before it even got going. He manages the difficult job of portraying such a character extremely well without needing to resort to cheap theatrics to get you to sympathize with him and his plight. That’s important, especially once we get into the final act of the story….

Most of our other actors aren’t given all that much to do… given their limited screen time… but they all hit their marks convincingly and carry the story forward successfully.

So… how about our “Big Twist”? Well…. without giving it away, I have to say, it’s not as successful as it might have been. If…. like a certain horror junkie of a Catgirl… you’ve seen a veritable plethora of films like this, then you’ll figure it out waaay before the mid point of our story. That’s the most disappointing thing on hand here, and it’s the one thing that makes this one merely a base hit to third rather than a home-run for Joko. Still… that puts it head and shoulders above many of his contemporaries in the Indonesian film community and keeps this one well in the area of being an excellent effort overall.

Most impressively perhaps is the way this film still manages to keep that look of being an “Indonesian” film while being done completely in English language… and I don’t mean just spoken language… I mean entirely in English. Written clues on screen… documentation like our hero’s National Identity card… all of it is in English. At no point did I need or even miss my usual subtitles. That alone should give it a wide theatrical release in markets that need to see Joko Anwar’s work, probably the smartest if also riskiest move in the production of this one. I’m not certain how this idea went over in the Indonesian domestic film release market, but those of us fans overseas certainly liked this chance of pace. (Hehehehe… and it’s probably the first Indonesian made film my sweetie Carolyn has ever not minded watching along with me…)

With all that… I suppose it’s fair to give this one 4 “Meows” out of 5…. although just barely. It’s a good film…. well crafted, competently made and not without some really nice moments…. but yet not a great one… and although it did hit many of the great quirky bits I like in Joko’s work, I also have to say it could have been much better. Mind you… by no means does any of that indicate this is a film to miss…. it’s just that I’ve been so impressed before by Mr. Anwar that I probably set a high standard for him to beat with each new effort, and this one didn’t quite make me as impressed as did his last one, “Pintu Terlarang” still the cream of the crop and best of his genre films in this wee Catgirl’s honest opinion.

So what about the German DVD? Well…. that comes widescreen, PAL formatted and Region 2 with both the original English language track as well as a German dubbing. German subtitles are also on board, just in case you might need them, but trust this wee Catgirl…. the original audio will keep all us English speaking fans happy enough. It also has an interview with director Joko Anwar… but weirdly enough, the audio (also in English) is waaaaay out of sync with the video making the viewing a less than pleasant experience. Not certain what happened there, but since the German audience would probably be reading the subtitles provided I’m thinking they wouldn’t care. The price? Right around 20 -25$ US. All in all, not a bad choice since as far as I can tell, not even the Indonesians themselves have released a disc yet.

Trailer? Oh yeah… Neko’s all over that wee detail… 😉