Time for a little less of my own personal Drama of late, and a bit more chop-socky Martial Arts movie action here at the ol’ Litterbox, Chinese style, with a look at director Andrew Lau Wai-Keung’s remake of the 1975 Shaw Brothers classic “The Flying Guillotine”, this time out titled simply as, “The Guillotines”.

Our synopsis goes like this: “During the Manchurian-ruled Qing Dynasty, Manchu Emperor Yong Zheng established his own personal secret assassination squad known only as “the Guillotines” to eliminate all who opposed him. Serving the Qing Court unquestioningly, and wielding a powerful flying weapon that can decapitate any enemy in a split second, they have never failed in 348 missions to eliminate their targets since their inception.

But their success has made them arrogant and complacent. Now serving under the new Emperor Qian Long, their latest mission tasks their new team leader Leng and them to rescue kidnapped team member Mu and capture the cunning peasant leader Wolf, a dangerous Han rebel leader who has stubbornly managed to elude custody. With palace official Haidu tagging along, the team follows Wolf to a village. However, the team doesn’t know that Qian Long is also treacherously planning to end the era of the Guillotines by replacing cold weapons with modern firearms and eliminate them to conceal the truth of his rule in Historical record. If they make one false move, they will become the hunted. Facing annihilation, Leng and his Guillotines must outfight and outwit enemies from both sides.”

Sounds pretty good… now if only the new CGI effects and modern film-making tricks will be enough to eclipse the legend of the original Martial Art cult classic. It’s always hard to beat a legend….. So let’s all “Read On” and see if “The Guillotines” is up to the task. 😉 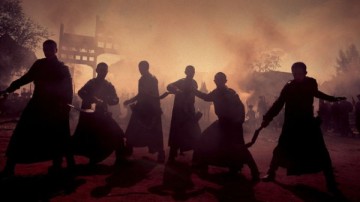 We get off to a promising start. A nighttime commando-style raid by the Guillotines to capture the wily leader of a group of peasant rebels called “The Herders”. Filled with all the martial art goodness and crazy CGI weapon effects to show us all just how gosh darn dangerous the Flying Guillotine really is as a weapon of assassination and terror. It makes for quite the fight-fest…. Ummmm…. and that’s really the first nagging problem with this re-make too. While the “Flying Guillotine” is spectacularly shown to be freaking amazing…. unfortunately it’s all just too darn freaking amazing for a technology supposedly created in ancient medieval China. This Steampunk inspired buzz-saw “Jai-alai Sword of Doom” with it’s boomerang skill-saw blade should be the weapon of choice for people battling. oh… say… Jedi Knights… or maybe vampires… but not simple peasant warriors in Manchu China.

Simply put… it’s a jarring anachronism that just plain doesn’t belong and sticks out like the proverbial sore thumb. Your Favorite Catgirl found herself actually missing the quaint “bladed hood on a chain” from the old Shaw Brothers movies that, while maybe dumb as hell, also actually looked like something that might just have gotten made in the China of old. Sometimes flashy and new isn’t the way to go… Sigh.

But at least that means we’ll get a movie filled with crazy fight scenes chock loaded with all that sort of Steampunk gadgetry, right? Ummmm… no. Not really. 😦

Most of our story is less about that nutty weapon and more about the guys who wield it. Specifically the Guillotines field commander, Leng (played by Ethan Ruan). He’s the proverbial “man in the middle”. Originally taken as a child to be one of two companions to the young Emperor Qian Long (played by Wen Zhang), he’s eventually made one of the Guillotines to see that the Emperor has a man inside to keep an eye on that deadly squad of killers. That leads to our Leng becoming a man torn between his duty to his Emperor and childhood friend and the loyalty he feels for his fellow comrades in this lonely tight knit secret group of assassins.

His problems only get worse once our tough band captures rebel leader “Wolf” (played by Huang Xiaoming) and he surprises Leng by professing to “know him”. How? From when? Why from the prophetic dreams he’s had that have revealing to him that our boy Leng is the man who will kill him at some point in the future. OK then…. Now with most people this would be a strange enough statement, but with Wolf you kinda just take his word about it.

Why? Well… he’s an odd rebel leader. With his wild hair, pacifist leanings, and genuine concern for the lives and happiness of the poor downtrodden Han peasants suffering under the oppressive Manchu-run Qing Dynasty he’s definitely not your average Rebel leader. Oooohh!! Did I mention… he’s a healer too… and he has “visions”… and a cool raggedy old robe. I think my sweetie Carolyn summed him up best when she leaned over during the early part of the movie and asked me “Ummmm… Miyu… Is this guy the “Chinese Jesus”, or what?” 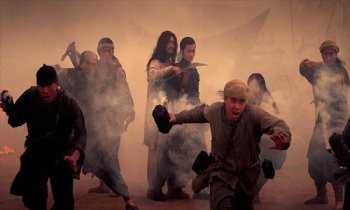 What else could I say but, “Yes… yes dear, he is.” (Yeah, yeah… I know… but somehow I suspect I’m already “going to Hell” so what’s a little blasphemy… so there.) 😉

But.. of course… being “Chinese Jesus”, our guy Wolf has also got some badass Kung-Fu skills and it isn’t long before he escapes from his captors and manages to take female Guillotine member Musen (played by Li Yuchun) hostage before making his getaway. On behalf of Musen’s father, who oversees the band, the Guillotines are given the mission to pursue Wolf and recover their comrade along with the help of sinister Court official Haidu (played by Shawn Yue). Unknown to the Guillotines… Haidu is another of the Emperor’s old childhood companions and a friend of Leng’s, but also the man who plans to eliminate the band in the name of sanitizing the history books for his Emperor’s personal memoirs. Oops… yeah… that’s gonna put Leng in a really bad spot now won’t it?

This forms the bulk of our story… As Leng is torn between his Duty and his Loyalty… as well as his awakening respect and understanding for the very real plight of the Han and Wolf’s desire to see them become equals in a revitalized Qing Dynasty that has moved away from it’s vicious past and embraced a “Golden Age” of peace and brotherhood for all.

Naturally… for that to happen.. all the evils of that past must be erased, including the Guillotines themselves, relics of a violent period that the Emperor would just as soon see forgotten, eliminated by his newfangled “Firearm Troop” and the power of gunpowder, bringing China into the Modern World. Sounds deep and meaningful doesn’t it?

Hmmm… now where the Jet Li action film “Hero” pretty much covered that same idea and managed to squeeze in quite a bit of wire-fu wuxia action, I’m sorry to say that “The Guillotines” really doesn’t manage to pull off the same trick. as convincingly or with anywhere near the same amount of cool kung-fu action. Darn…. 😦

Yep… most of our film is just endless brooding on the part of our hero Leng as he tries his darned best to “ride those two horses” he’s been stuck with. Ahhh… and unfortunately in a film built around lots and lots of dialog, drama, and character driven scene after scene, the chemistry between most of our players is shallow and unremarkable at best. And the ending? Well… without spoiling things, let’s just say it’s pretty much a bummer… Damn…

At least Carolyn liked this one. I didn’t really have to heart to tell her how disappointing it was compared to it’s earlier incarnation from back in the day. Now for this wee lady… I’m afraid that “The Guillotines” just didn’t deliver the goods, action movie wise. I give it a poor showing of only 2 “Meows” out of 5. With perhaps a little more action… a little more crazy kung-fu…. and a wee bit less revisionist history lessons we might have had something here. But alas… that just wasn’t to be, I guess….

At least the Region 3 Hong Kong DVD release was good… done widescreen and with both Cantonese and Mandarin audio tracks along with the excellent English subtitles I like. Available for around 15$ US most places, it’s still more of a “miss” than a “must buy” unless you are a die-hard Martial Arts fan, but hey… they can’t all be winners… Ah well, better luck next time.

Trailer? Don’t worry. Even if it’s not the greatest Martial Art film ever, Neko’s still got ya covered. 😉