Back from our Christmas Holiday fun and games… and right back at things with a look at the new Aussie “Killer Sharks in a Shopping Mall” horror effort, “Bait: 3D” courtesy of one of the DVD’s this wee Catgirl got for a present this festive Christmas season.

Our synopsis goes along these lines: “A massive tsunami drowns a sleepy Australian beach community. A small group of survivors find themselves trapped in a flooded underground supermarket and soon discover they are not alone, the tsunami has brought along with it deadly unwanted visitors from the depths. It isn’t long before survivors quickly realize their battle is not only to overcome the threat of drowning, but a threat far more sinister – a couple of enormous and hungry great white sharks.”

Yep…  I just knew I was gonna get this one. It was on my list to pick up just as soon as it “made landfall” this month… but…. then I got a call a couple weeks back from Sandra telling lil’ ol’ me that I might want to wait on it. Seems Maddie and Adam wanted to buy some movies for Aunt Miyuki as a Christmas present and darn it…. even if it spoiled the surprise, there was really only one way to make certain a certain lil’ Catgirl didn’t already have this particular one. OK… OK… So could I disappoint the kids? Not and remain their favorite “cool Aunt”…. Oh well… at least it meant we’d get a chance for a “Family Movie Night” together during our visit. 😉

Hmmmm? Killer sharks for Christmas?… Don’t know about you, but that idea sounded pretty sweet to this lady. Wanna know if the kids scored me a good one for their favorite Aunt? Then all you gotta do is “Read On” and find out….

So…. why was this one on my “must see” list in the first place? That’s easy. “Bait” is written in part by Russell Mulcahy… director of the other Aussie horror classic “When Animals Attack” film, 1985’s “Razorback”…. the “killer piggy” movie extravaganza of all time and a personal fav. It’s been a while since Russell pulled off that one, but I was soooo hoping he could work his magic one more time and give me another “guilty pleasure” classic to proudly admit to watching, Hehehe!!

So what’s the scoop? Well we get right off to a start meeting our film’s hero, Josh (played by Xavier Samuel). He’s a young hunky Lifeguard who spends his days at the beach with his best buddy Rory (played by Richard Brancatisano) doing all those “Baywatch” kinda things you might expect. When we first see him, he’s suffering the effects of a night of serious partying, courtesy of his friends in celebration of his upcoming nuptials with Rory’s sexy sister Tina (played by Sharni Vinson). There’s some sweet romance in store while best bud Rory takes Josh’s job of setting the buoy for him so Josh and Tina can savor their last days here in the Aussie beach paradise before Tina and he jet away to Singapore for her new job and their happy married life together. Sounds dreamy, doesn’t it?

Well it would be, if it didn’t happen to be the middle of the big yearly migration of the great white sharks off the Queensland coast. Awwww crap… somebody’s gonna get eaten, aren’t they? Oh yeah. Say Bye-bye Rory…. You can pretty much guess the rest. Josh blames himself for his buddy’s death… he can’t face Rory’s sister Tina…. their engagement is off and she leaves for exotic Singapore without him… and he basically descends into that miasma of depression that sees him give up everything good in his life to end up working a crummy stock clerk position in a supermarket. At least he should be safe from the sharks from then on, right? Nawwww… wouldn’t have much of a movie if that happened now would we? 😉

10 months later… and miserable Josh is living the zombie-like life of the working poor. He wakes up… drags himself to a job he hates… but despite it all, he can’t stop noticing that this day is somehow… different. The dogs are howling… the birds are all freaked out and heading for parts unknown… and yet despite all these ominous dire warnings, human beings keep on with their silly lives, oblivious to the catastrophe coming for them like a rabid pit bull running amok.

Now you just know… that this day of all days will be the one where sexy Tina will wander back. I mean… of all the crummy supermarkets in all the crummy beachfront towns in Australia… what’s the chance she’ll wander into the one her ex-fiance slaves away in? 😉 (Ooooohh…. and what are the chances she have her new hunky Chinese boyfriend in tow? Oh yeah… it’s an old plot twist… but you just gotta see it happening.)

Sigh…. Yeah. Getting the feeling that “Bait 3D” is going to plug away at telling us a really familiar story that we’ve sort of heard around a thousand times before? Well, you’d be right. There’s absolutely nothing new or novel on hand throughout our film and that’s a shame. I was sort of hoping for something different, rather than the story we get… but… at least this one has sharks. Really hungry, crazy, killer sharks… so I can say the remainder of our film isn’t a total waste. 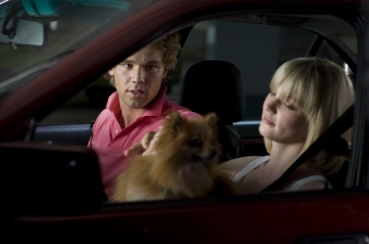 So who else do we get in our “stock characters” list this time out? Well there’s two guys planning to rob the store… Doyle (played by Julian McMahon) and Kirby (played by Dan Wyllie). Doyle’s our basically “good guy” conflicted thief forced by circumstances to pull this job with psychotic Kirby… who you just know is gonna mess things up by killing some innocent shopgirl right before the big ol’ earthquake and tsunami trap them in the store.

Is there a cop around? That plot always needs one… so of course we also get Jaimie (played by Phoebe Tonkin), teenage shoplifter who gets herself caught by store security just so her dad…. Todd (played Martin Sacks) can turn out to be the policeman sent on the call. Convenient, eh?

Ahhhh... but we’re not done yet. How about if we throw in Jaimie’s boyfriend Ryan (played by Alex Russell). He can stick up for her and get himself fired by his boss Mr. Jessup (played by Adrian Pang) filling the ever so important role in our movie as the complete a**-hole you can’t wait to see get munched on by our fishy friends. 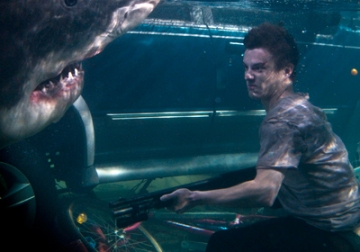 OK….. OK. That ought to be enough people for our crazy killer sharks to try eating…. let’s have that crazy earthquake followed by the tidal wave to beat all tidal waves. It scoops up some of those migrating sharks and turns our supermarket into an Olympic swimming pool, killing a buttload of extras in the process and creating the perfect situation to test the mettle of our hero Josh as he tries to redeem himself and win back his true love. Oh…. yeah…. and save some of these other characters in the process. Hey, it couldn’t hurt, right?

From this part forward, the real fun begins. It doesn’t make a whole lot of sense at times… but boy can those CGI sharks kick some serious butt!! One by one, the more annoying cast members get munched on. Some really deserve it…. some are just doomed like the red shirt guys in “Star Trek”. Case in point…. Tina’s new boyfriend Steven (played by Qi Yuwu). Unfortunately for him, he’s actually a really cool and very nice all around guy. Shame he’s in the way of Josh and Tina getting back together….. plot-wise that’s the “kiss of death”. Yep. 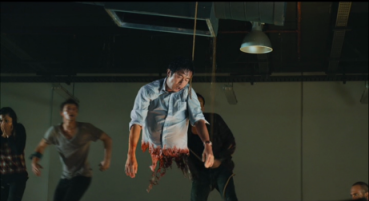 Everybody is going to be electrocuted by some dangerous dangling power lines? Don’t worry… Steven’s ready to man-up and swim into the utility room in a cobbled together anti-shark suit made out of broken shopping carts just to throw the main breaker and save them…. even though it’ll either get him drowned or eaten. (Ummmm? The main breaker box is underwater? Shouldn’t everybody already be… well… you know… electrocuted? I know… I know… shut up Miyuki and just roll with it. It’s sad… it’s poignantly romantic…. and gets poor Steven out of the way quick…..)

Of course… we also get the big “estranged Father/daughter reunion”…. our “good guy” crook gets to make amends for his poor Life and career choice…. and despite the seeming impossibility of it all, our boy Josh gets to make up with Tina by the time our story wraps. Ahhhhh…. and of course a few more annoying characters get savagely eaten alive by the sharks before our boy Josh goes all “Rambo meets Jacques Cousteau” on their butts.

Surprisingly… although sadly much of our lil’ film is awfully predictable and formulaic… in the end I actually have to admit that I kind of liked this one. Much of that was less about the film, I’m thinking, and more about the goofy fun I had watching it with Carolyn and her sister’s family on Christmas Day. The kids loved the silliness of it all…. and I certainly had loads of laughs as we watched the gruesome goofy action unwind. Given that… although I’d say this one is in no way a “timeless classic”, it nonetheless would be a great lil’ evening’s silly harmless fun for the right group of genre fans.

I can give it 3 “Meows” out of 5… not a bad film… not a great film…. but definitely the most fun I’ve had with a “killer animal” film in a whole long time and that ought to be worth something. The Region 1 DVD comes bundled with the Blu-Ray disc…. and thankfully, that’s where all the “3D” stuff is presented. The DVD itself is bare-bones… with no real extras and in eye friendly letterbox formatted 2D. Yay!! All for around 12-15$ US in the usual places.

You want a Trailer? Why of course!! 😉