September has arrived… along with all those chilly nights that promise Autumn is here at last and Summer fades to become just a warmly remembered memory. Sigh….

I know I’ve been absent for a couple weeks, but seeing as I seriously fell behind and just sort of left off in the middle of our “Martial Arts Mayhem” movie review festival, I though I might let the Masters of the fine art of butt-kicking stay around for a little while longer and do a few more slices of action film goodness here at the ol’ Litterbox. This time out… the Korean Karate biopic “Fighter In The Wind”.

Our synopsis reads: “Fighter In The Wind” is the fictionalized story of karate competitor Choi Yeung-Eui who went to Japan during World War II to become a fighter pilot but instead found himself set upon a very different path. Finding Japan a difficult place for a Korean man to survive the hatred and prejudices of the time, he retreats to the mountains where, living in his karate gi, he trains day and night; running in the mountains, lifting tree trunks and using makeshift training equipment to harden his body and fighting spirit through austerity. Eventually he changed his name to Masutatsu Oyamai and traveled across the country, defeating martial artists one after another. This film concentrates on the period when he is still young, and developing his famous karate style, Kyokushin.”

Yep… it’s time for the Koreans to take a stab at things. Wanna know all the poop on this one? Well then, o’ Gentle Visitors, by all means follow this wee Catgirl and let’s “Read On”, shall we? 😉 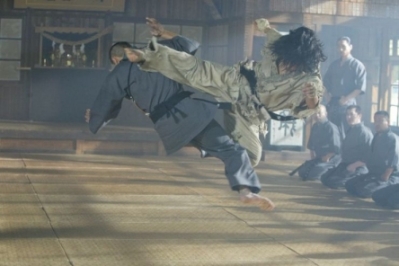 Korean Martial Arts…. I don’t know about you, but every time this wee kitten thinks of them I just can’t help envisioning “Taekwondo”. You know…. Lots of “Chuck Norris”-y style high kicks….. lots of “boots to the ol’ head”… that sort of thing. The only time I’m really thinking of Karate in connection with Korean Martial Arts, is when I’m picturing all those Japanese bad guys getting the stuffing stomped out of them by the Korean hero. Given that… the plot of this particular film seemed a little strange to me at first. Especially given how much films have always stressed the general dislike between the peoples of Korea and Japan and their rather strained relations throughout history. Particularly where WW2 is concerned.

In “Fighter In The Wind” we are introduced to the story of the real life founder of the Kyokushin Karate style, Masutatsu Oyamai who was apparently, in actuality, a Korean fighter by the name of Choi Yeung-Eui. How did a Korean manage to become the undisputed Karate champion of Japan? Well… this film makes it’s goal the telling of that very unlikely tale.

We begin in Japanese occupied Chosun Korea… as our hero Choi Yeung-Eui (played by Yang Dong-kun) becomes caught up in the seemingly attractive prospect of joining the Japanese Military to learn to become a pilot. There isn’t a lot of background given as to why serving the Japanese was even possible… and I’m supposing that most of this is due to a Korean audience already having a fair understanding of the political and cultural backdrop of that time-period, but for me… an outsider… this seemed kind of strange. There is obvious tension between the very haughty and racially obsessed Japanese and the Koreans under their “protectorate”, but it isn’t until much later in the movie that any of that really becomes important to the story. 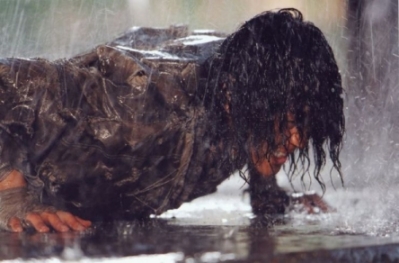 Needless to say… our hero doesn’t fare all that well during his time in the military. He never does become a pilot… and in the first sign that not is at all well between the Japaneses and Koreans, we see him brutally treated as “unworthy and worthless”…. mind you…. it is because he and his fellow Korean pilot trainees are less than enthusiastic to be picked for training as kamikaze pilots. Staked out for punishment, he breaks free during a bombing raid on his airfield and then runs into our film’s main villain, a Japanese officer and karate expert named Kato (played by Masaya Kato). One humiliating fight later and he and his fellow Koreans are simply left to flee the base… Kato and his men scornfully unwilling even to kill them, believing them completely unworthy of death at their hands. Talk about insulting…… licking their wounds Choi and his friend Chun-bae (played by Jeong Tae-woo) disappear into the squalor, despair, and chaos of post war Japan during the American occupation. They try to make a simple living running some gambling scams in Tokyo’s back-alley world of vice, only to run afoul of the local Yakuza gangs… no more accepting or even tolerant of the Koreans than the military had been. That leads to a nearly fatal fight…. and a very public humiliation for Choi that leaves him with the reputation of “coward” attached to him like a dreadful weight on his soul. He is only saved from ignominious death by the timely intervention of his old childhood karate master Beom-su (played by Jung Doo-hong), whom he lost contact with years before when Beom-su was targeted for subversion by the Japanese occupation forces back in Korea.Now a one handed cripple, Beom-su travels the country with a circus where he acts the role of bodyguard and roustabout.

In a classic bit of Martial Art plot, the piteous Choi begs Beom-su to train him once more…. something the old fighter has sworn never to do for anyone again. There’s the requisite montage of Choi spending his time in the rain… in the cold and wind… waiting for Beom-su to see that he is worthy. Finally he relents and our hero starts to take the first steps towards regaining his self respect and to see that his life can have purpose. What kind of a purpose?

Well…. there just has to be a romantic angle in a story like this, and for Choi that would be a chance encounter with pretty young geisha Yoko (played by Aya Hirayama). Our hero manages to save her from rape at the hands of three drunken American soldiers one evening, angered at the inaction of the Japanese police who see the incident but fear to take action against the Americans. He becomes a local hero of sorts after this, carrying on this crazy nightly personal crusade to help Japanese women who are being assaulted and mistreated by American occupiers. He becomes a wanted man, carefully keeping a close eye on pretty Yoko who dreams of her hero… “The Brave Tiger” all the while unaware that the shy rickshaw driver who seems always to follow her is in truth her savior.

Yeah, yeah…. you just know that eventually this all catches up with him and he’s nearly killed by vengeful US soldiers one evening, saved only by being hidden away and nursed by Yoko, finally recognizing him and smitten with the shy, gentle spirit that hides away beneath his rough, homely exterior. It’s after this that Choi finally finds some measure of happiness spending his days with Yoko in the bliss of young romance. Sadly…. you just know it won’t last…. Martial Art films are just like that.

As expected… just when Choi’s life seems to be on the mend, the local Yakuza decide to prey on the circus and Choi’s master Beom-su gets himself killed protecting it. The Korean performers, along with Choi and Chun-bae decide to throw common sense to the side and engage the Yakuza in a pitched battle to seek revenge. It’s a bloody mess…. and afterward Choi, filled with despair, leaves Yoko and the city behind to retreat deep into the lonely mountains where he dedicates himself to a brutal training regimen in order to home himself into the greatest fighter ever in an attempt to honor his late master’s memory. There’s lots of great imagery here…. Choi living like a hermit, his once spotless karate gi becoming a ragged mess. He climbs ice cliffs…. beats himself with logs, smashes away at rocks and trees until his hands and feet are nearly bloody stubs. Eventually, hardened by the elements and nearly impervious to pain he comes down out of the mountains to begin a journey throughout Japan, challenging all the great fighters to prove his worth. One by one they fall before him…. all leading up to a final duel with the one man he must face to destroy the humiliations of his life…. Kato, now the greatest Karate master in the country and the supreme head of the newly organized Japanese Karate Association.

There are a few distractions along the way there of course. He has to return to Yoko… the sweet girl who loves him unconditionally…. he has to kill a deadly assassin despite promising Yoko never to fight again…. and then he has to seek the forgiveness of that man’s wife and son, left to a miserable life without him. Yeah… sounds kinda corny… but that’s just how Karate Masters in movies like this roll. 😉 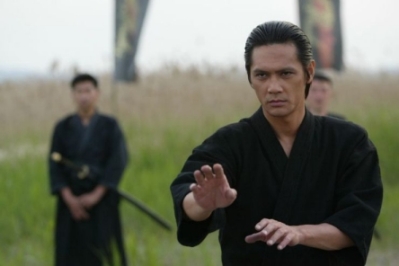 Oh yes… there’s lots and lots to follow here, but luckily for the most part it’s all worth the effort. While not a perfect movie…. there’s too darn many things all crammed into it to feel comfortable…. it nonetheless manages to entertain in a satisfying fashion. The history stuff was also a bit hard for me to follow without a quick “Google” of “The Japanese occupation of Korea” afterwards…. that made things much easier to grasp plot wise in retrospect, mind you.  Ahhh…. and I can’t really say the “romantic subplot” was wrapped up in any satisfactory way either…. very disappointing, especially for my sweetie Carolyn who really, really…. really…. wanted to see Choi and Yoko together at the end with a few lil’ Karate students of their own to carry on the traditions into the next generation.

But, despite all this, I feel I can still give “Fighter In The Wind” a good hearty 3 “Meows” out of 5. It’s well acted…. well filmed, hits all the expected “Martial Art” genre high points…. and all with a gorgeous “period” look to it to boot. The Region 1 DVD came with excellent English subtitles and was well worth the 15$ price tag for an evening’s Karate action on a cold Autumn evening. Never a bad thing. Nope. Not at all. 😉