Time for another in this month’s “Martial Arts Mayhem” review series, this time a look at the runaway Indonesian Blockbuster “The Raid: Redemption”. Plenty of cops and crooks and some serious “close quarters combat”… this one sounds like you had to cross Jason Bourne with some Bruce Lee, throw in a lil’ Tony Jaa and then stand back and let the bullets and fists fly. Yep… that certainly oughtta work… 😉

Our synopsis? Try this: “Deep in the heart of Jakarta’s slums lies an impenetrable safe house for the world’s most dangerous killers and gangsters. Until now, the rundown apartment block has been considered untouchable to even the bravest of police. Cloaked under the cover of predawn darkness and silence, an elite swat team is tasked with raiding the safe house in order to take down the notorious drug lord that runs it. But when a chance encounter with a spotter blows their cover and news of their assault reaches the drug lord, the building’s lights are cut and all the exits blocked. Stranded on the 6th floor with no way out, the unit must fight their way through the city’s worst scum to survive their mission.”

Now I’ve been itching to see this one for quite some time now, but my hope to catch the original Indonesian release has been frustrating. I’m not even certain that it’s been released there yet, but it’s certainly gone global with both US and Hong Kong versions popping up this week alone. Waaaaaahhhh!!! But…but…. I just can’t wait! So, I snagged the unrated version of the US Region 1 for me, Carolyn, and Sam to do a proper Martial Art Action “movie nite” this weekend. Wanna hear all about it? Then let’s just get down to business and “Read On”.…. 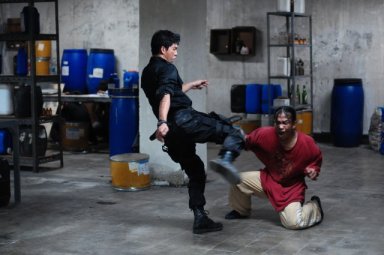 As with most modern Martial Art films these days, “The Raid” likes to mix and match all the amazing martial art fighting with plenty of both crazy stunt work and gun-play to push the violence to levels just short of apocalyptic. Sometimes it works and sometimes not… the real trick is in the balance between the two. Here I think, is this film’s greatest strength. Knowing just how to both have the overwhelming firepower of modern automatic weapons while still giving the fighters plenty of logical reasons to get “up close and personal” when needed.

Our story is simple. Iko Uwais, the star of 2009’s surprising Indonesian Martial Arts hit “Merantau” is back as young rookie cop Rama. 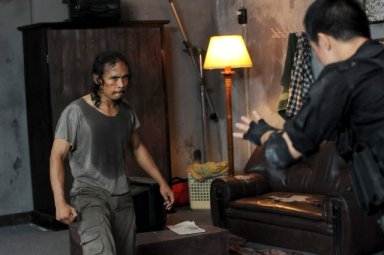 He’s part of a hastily thrown together Special Police Operations raiding team assigned the daunting task of assaulting a heavily fortified and defended apartment high-rise that is the headquarters and lair of Jakarta’s number one crime boss Tama (played by Ray Sahetapy). He’s actually here for some personal reasons too… seems his estranged brother Andi (played by Donny Alamsyah) is one of Tama’s right hand men and Rama wants to be part of this raid in the hopes of saving him from both the cops and his criminal cohorts. Naturally… nobody in the department knows of his connection to his brother… and naturally it’s not gonna be easy balancing his role as cop with his duty to his family. As expected, there are also a couple of other hidden agendas working their own plots behind the scenes as well, just to give us some stuff to fill out dialog between action sequences.

Now… although this does make for a fairly predictable story overall, in a way I think that actually helps the film rather than hurts it. “The Raid” is easy to understand…. and for an audience of non-Indonesians, it will make following the whole thing a lot simpler than if there was some great epic story on display here, heavily dependent on an audience understanding both culture and history to feel involved.

Nope… this one is mostly about just kicking back and being blown away by the action as it happens. For about a third of our film we get the commando stuff… lots of gunfire and all the modern urban combat you could want before both sides start to get split up and forced to play that deadly game of cat and mouse that the building forces them to do.

The sets are great here…. and for me anyway, the grungy building itself is as much a character as our human actors, with it’s own look and feel. There are crumbling stairwells and odd art deco light fixtures…. secret compartments in the walls… weird windows of glass blocks…. crazy torture chambers… and all sorts of different apartments filled with various thugs and gangsters all of which very much lend to a feeling of trapped claustrophobia at times.

Then… as our fighters are whittled down, the brutal hand-to-hand stuff starts. The flavor of the day here is the homegrown Indonesian art of Pencak Silat… and using it seems mostly to be a matter of getting right up in an opponents face and just beating the living snot out of him. With your hands… your feet…. your elbows… and anything else you got. There’s wrestling style take-downs, nasty choke holds, crazy contortionist escapes, and all sorts of joint breaking submission moves. Ohhhh…. and knives…. lots and lots of sharp pointy knives. After seeing this one, this wee Catgirl honestly believes she’s seen just about every possible way you can kill somebody with a knife. No freaking kidding.

If this is sounding particularly brutal… well… by goodness, it is. Luckily the bad guys here are some of the most nasty and evil slimy bastards you can imagine, so seeing our hero rip them apart is that special sort of that guilty enjoyment that all “revenge melodrama” thrives on. Throw in a “dirty cop” angle and you’ve just about got all the expected genre conventions covered.

Now not all is good in the land of butt-kicking….. There is the basic problem that all of our characters are pretty much one-dimensional and lacking in any real development, case in point being our hero Rama and his criminal bro,  Andi. You never really get any back-story on these guys. I mean… we do get told that Andi was a disappointment to his father… that at some earlier point he just up and disappeared on his family without any explanation, but we don’t get any sense of how that really affected our hero. I wish there had been some flashback sequences here to fill in these blanks. It would have added weight to the bond between the two brothers… maybe even added some depth of feeling to their reunion under such horrible circumstances, but we are cheated of all that. A shame really… as the best heroes in such stories always have these tragic shadows in their past that help shape them into the deadly fighting masters they usually are. Audiences love seeing those sorts of elements… things that humanize the hero and make you identify with him and his struggle against such daunting odds. 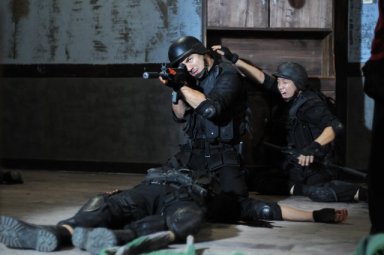 Ummmm…. and another thing…. where were the killer “kung-fu girls” you always seem to get in these movies? Neko was sooo disappointed not to have a feisty fighting femme to root for. Even Carolyn remarked on this… asking me if women actually even do Martial Arts in Indonesia. (I mean… They do, don’t they? Inquiring kittens want to know!! ) Instead there really are only three female characters that make an appearance. Rama’s sweet little pregnant wife, pining away for him at home…. the equally pregnant wife of one of the apartment dwellers….. and some really skanky looking drugged out hooker in one of the narco dens our heroes bust into during the course of their adventure. Not exactly the sort of representation of “female empowerment” this lady was hoping to see. Sigh….. 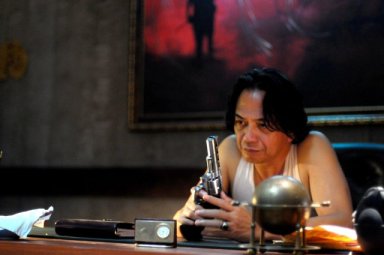 Still…. even if “The Raid” is light on character development, at least action junkies should take to this one like fish to water. The fight and stunt choreography is just amazing, utilizing the sets and environments to their maximum effect. The final “Boss Battle” between Rama, his brother Andi, and Tama’s Main Enforcer…  a guy with the charming name of Mad Dog… is about the meanest knock-down, drag-out, no-holds-barred fight I’ve ever seen. How these guys could take that punishment is completely beyond me. Here the Indonesians rival the best of Thai kickboxing action and manage to even surpass it for sheer brutality at times. 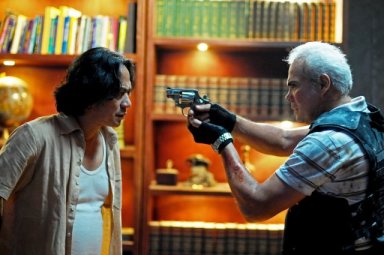 So…. when it’s all said and done, how do I rate this one? Hmmmmm. No problem there. “The Raid” scores 4 “Meows” out of 5. Although not the perfect film, the Indonesians have pulled off a real feat of action film making and come up with a movie that easily equals any other action film made anywhere. Not only that… overall it’s very commercial, polished and translates easily into a story any audience will understand. This is the one film that should make Western audiences stand up and take notice of a film industry largely ignored outside of Indonesia itself. Keep making more films like this and they’ll easily start to give HK, Korea, and Thailand a real run for their money at the International box offices of the world at large.

The Region 1 DVD comes Unrated…. in NTSC widescreen format, with the original Indonesian language track (although sadly, not the original musical score…) and in an English dubbed audio for the subtitle phobic among us out there. There are plenty of extras on board as well, featurettes on the stunt work, the US music dub by Linkin Park’s Mike Shinoda, a nice “Making of”, and a full director’s commentary to name a few. All for around 15$ US most places. I’m somewhat sad that I didn’t get the original Indonesian music score as well, but who knows? It could be reason enough for me to snag a copy of the Indonesian DVD should I ever find a copy….. So, in wrap-up, if Martial Arts are your thing, then what the heck are you waitin’ for? Get on out there and grab a copy of this one. You won’t be disappointed. 😉

Ahhhhh….. and  it seems your Favorite Resident Catgirl Warrior Princess isn’t the only one to be intrigued by all the “chop-socky” shoot-em-up action either. For some other interesting opinions, please do check out the reviews over at “Things Fall Apart” where our fellow film fanatic elpeevio has taken his own look at this one HERE. Not only that, but another blogging friend, Indonesian film fan and turtle-lover, Miss Novia Rozet has her own little take on this one as well over at her blog, “Polychrome Interest” so be sure and read all about this one from her HERE as well! 😉