August is here…. and with it your Favorite Catgirl Warrior Princess has decided upon a new “theme” month of reviews here at the ol’ Litterbox…. Soooo… as the first of my “Martial Arts Mayhem” Review Festival, I thought I’d start out with something really different. What could be more appropriate then, than a look at the recent Brazilian Martial Art fantasy, “Besouro”? Yep…. honest to goodness Brazilian Martial Arts…. and a big ol’ heapin’ helping of African folklore and mysticism to top it all off and give it a unique look and feel all it’s own. Oh yeah… that’ll do it!!

Our Synopsis? Well check this out: “Based on the life of a legendary capoeira fighter from Bahia, “Besouro” spins a fantastic tale of a young Brazilian man of African descent in search of his mission to free his people from the oppression of post slavery Brazil through the use of his Martial Art and the mystical guidance and help of the African spirits of his ancestors.”

The great looking trailer… that seems to promise all the heroic butt-kicking action anyone could ever want most definitely had me interested in finding this one. Thankfully, it’s been released here in the good ol’ US as “The Assailant”…. Errrr….Ummmm? Huh? What the…? Now that’s certainly a goofy title…. But hey… with that great Trailer, I’m willing to take a chance. That just leaves me with one question…. Do you wanna know all about it too? Then… “Read On”…. and let’s get to it!! 🙂 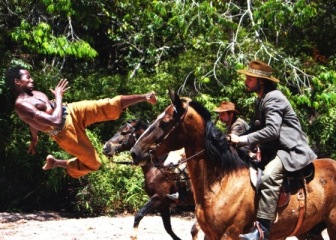 Now most Martial Art films follow a certain narrative style. Usually it’s some version of “the quest”…. A hero sees injustice but lacks the strength to defy an enemy of seemingly unstoppable power. He begins to learn the fighting skill necessary to oppose that enemy and has some initial success against the weaker minions of that enemy. He fights the villain and loses…. having failed to grasp the one secret behind all the fighting that will ultimately let him prevail. Not to worry…. he always gets that second chance… having learned the secret hidden ultimate technique or finally having that moment of epiphany to grasp the “ultimate truth” behind all the nifty bone-breaking, butt-kicking moves that takes him to that higher level our evil villain will never reach. There’s one single battle royal and our hero whups the bad guy but good for the glory of truth, justice, honor, revenge or whatever….. time to roll those credits!! 😉 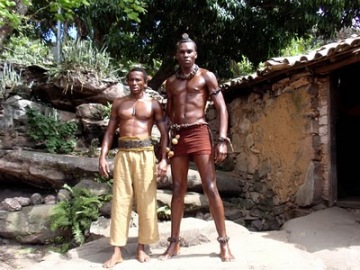 There are subtle deviations from this basic plot… but for the most part, if you’ve got this all down pat, most Martial Art stories are any easy grasp for the viewer. “Besouro” certainly understands this idea, and despite transporting the usually Asian flavored story plot to 1920’s Brazil, pretty much stays true to the general notion of what a Martial Arts film is all about. 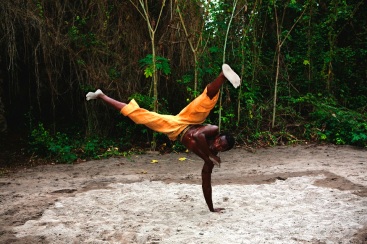 This time our story takes that general plot and mixes in some revenge melodrama and the old “free the people from their evil oppressors” angle to give us a look at the struggle by Brazil’s former slaves, given freedom in name only, to rise up and demand true equality and fair treatment by their former Masters who still abuse and mistreat them with impunity. It’s 1924, and despite slavery having been outlawed throughout all Brazil some 40 years earlier, the ex-slaves continue their miserable existence on sugar can plantations deep in the back-country living as they have since they were first brought to the country. Only one man, Mestre Alípio (played by Macalé dos Santos), the wise old capoeira teacher and spiritual leader of his oppressed people, stands up for them against the cruelty and exploitation of Colonel Venâncio (played by Flávio Rocha). He’s equal parts Gandhi and Martin Luther King, and believes more in the non-violent approach to resistance rather than the butt-kicking ideas of his young disciples, Besouro (played by Ailton Carmo) and his childhood friend and fellow capoeira fighter, Quero-Quero (played by Anderson Grillo).

Naturally, the Colonel gets tired of Alípio’s attempts to reform things and one day, while Besouro and the rest are messing around instead of protecting their leader, the Colonel’s men put an end to the old man once and for all, shooting him dead. The workers all end up blaming Besouro for his murder, for as his chief student it was his duty to stay with Alípio at all times and should’ve been protecting him instead of showing off his skills for his own glorification.

Aww… crap… you mean our Hero is some sort of glory seeking asshole? Yep. But hey… that whole idea about redemption and humility are all a part of the Martial Art Legend, so it isn’t long before Besouro is striving to put things right. Here that means getting right with the ancient African Spirit/ Gods of his ancestors all of whom have something to teach him so he can master the highest techniques of capoeira in time to get revenge for his dead master, free his people from the villainous Colonel, and hopefully win the heart of his childhood friend and secret crush Dinorá (played by Jéssica Barbosa). Not an easy list to accomplish…. especially when Dinorá is already the girlfriend of his friend and rival Quero-Quero. Oh yeah… you just know that’s gonna be trouble……

I wish I could say it all unreels as smoothly as it sounds, but “Besouro” wants to be more than just a simple Martial Art film and it’s here, I think, that it runs into trouble. It also wants to be one of those grand semi-historical epics too… and once it deviates to those more lofty aspirations, the Martial Art stuff starts to suffer as the movie stumbles to find it’s way. In it’s 85 minute running time there just isn’t enough time to squeeze in all the fighting that Martial Art fans would want along with it’s dreamlike mystical sequences as Besouro communes with the various Gods as part of the quest as well as do proper justice to either the romance subplot or the rivalry between Besouro and Quero-Quero. Oh yeah…. and somewhere in there he has to fight a vicious gang of thugs out to kill him for the Colonel. It’s a lot for one film to accomplish in that short a time….. and I can’t really say it pulls it off well.

So… are there any good elements that raise this one to the levels to which it aspires? Certainly. The fighting scenes, while few and brief, are very well done by choreographer Ku Huen-Chiu of “Crouching Tiger” fame. Here he makes the capoeira look exceptional and totally different from the Martial Art moves you might be familiar with. I just wish there had been more of them to watch. The mystical elements…. all featuring the various African Gods such as the foreboding warrior spirit Exu (played by Sérgio Laurentino, Ó Paí Ó), the naked water goddess of healing, Oxum (played by Adriana Alves), and the topless Mother goddess Iansã (also played by our lead heroine Jéssica Barbosa), she who takes care of the spirits of the dead. Each has their part to play in Besouro’s quest, teaching him the secrets and helping him to transform himself from the self-involved cocky asshole into the true successor to Mestre Alípio and a hero worthy to lead his people. Those scenes…. so different and so particularly “African” in feeling give this film a look and folklore that make it unique among a plethora of Martial Art quest films which have tried to break out from the restrictions of the usually “Asian” flavored stories out there. That alone scores big for this wee Catgirl….. but then I like the odd and the different… 😉

I enjoyed this one, even if it wasn’t a “perfect” film, and can easily give it 3 “Meows” out of 5. It’s a good film, if a little rough around the edges, and gets good marks for wanting to try something different within the genre. The US Region 1 DVD is excellent, in letterboxed NTSC format with both the original Portuguese audio track with English subtitles as well as an English audio dubbing available. It ought to be easy to find for right around 15-29$ US in most of the usual places. Well worth a look if Martial Art films are your thing…. and a reasonably good story even if they aren’t.

Our Trailer gives you the skinny on all the butt-kicking fun and games…. Enjoy!