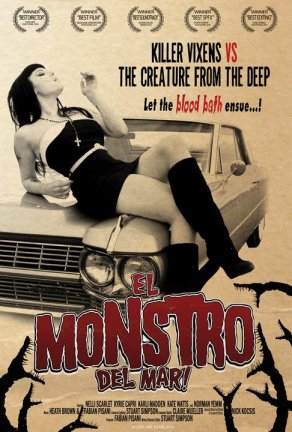 Hmmmm? A goofy movie spoofing all those gory 70’s “Bad Babes Gone Wild” rubber monster grindhouse horror films that this girl grew up watching on late night TV in the 80’s….. Think this wee Catgirl could pass up a chance to see a movie like that? How about if it were made in…. Australia? Ok, ok…. sign me up. 😉

Our synopsis? How about this: “Three gorgeous but deadly femme fatales, Beretta, Blondie and Snowball, hole up in a small beach-side community after their latest murderous spree attracts the wrong kind of attention. But not all is as it seems here in this small town. A few of the locals try desperately to warn them of the dangers of going into the water but these wanton vixens will listen to no one’s advice and they brazenly take to the sea. Unknown to them however, their wild seaside frolic has awakened a horrifying beast from the depths of the ocean. It isn’t long before these sexy sirens are hip-deep in trouble as the sea itself rises in a tidal wave of blood and they face the fight of their lives against the terrifying Kraken. …El Monstro del Mar!”

Originally released on an Australian Region 4 DVD, importing such a crazy lil’ film was just too much for this wee Catgirl’s budget to handle… Thankfully, it wasn’t all that long before a much more price friendly Region 1 DVD came along for me to snatch a copy of. Am I expecting a cinematic masterpiece for all the ages? Nawwww…. but I do think I’ll catch some goofy exploitation goodness all wrapped up in a bit of nostalgic homage to the brain rotting “guilty pleasure” films of my somewhat miss-spent youth. Never a bad thing…. 😉

Have some memories of your own of those terrible video nasties your Mom or Dad never wanted you to watch when you were an impressionable youth? Then you’d better “Read On”… ’cause I’ll bet you won’t want to miss this one either… 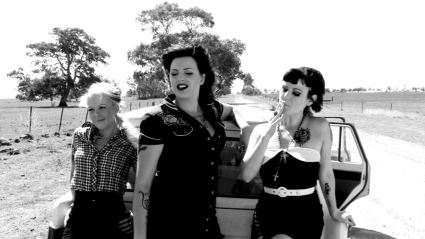 Our film gets going with our “Bad Girl” anti-heroines Beretta (played by Nelli Scarlet), Blondie (played by Karli Madden), and Snowball (played by Kate Watts) sitting alongside a deserted road in their broken down vintage car listening to the tunes on their car’s cassette player…. a great lil’ scene, filmed in black and white, that immediately brings back memories of all those old 70’s horror grindhouse films you remember from waaaaay back when. 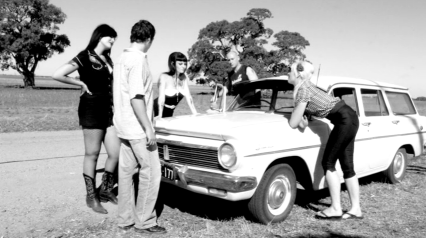 Director Stuart Simpson has obviously seen lots of these… and for the most part manages to capture the look and feel of those old films pretty well throughout “El Monstro” with only the occasional minor anachronism creeping in to spoil the fun here and there. It’s certainly a fun approach and gives the film the same feeling as other “Bad Girl” cult classics such as Russ Meyer’s “Faster, Pussycat! Kill, Kill!!” (another of those movies lil’ Miyuki was never, ever supposed to watch back in the day…. ) 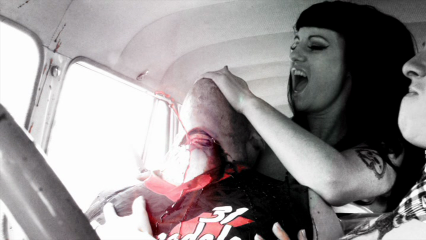 We don’t waste a whole lot of time getting a feel for the girls…. and they definitely aren’t the sort of heroines you find in most monster movies you might remember. Oh no…. these ladies are bad. And by bad, this wee Catgirl means really, really baaaaad. These are those sorts of trashy girls with the tattoos, potty mouths, loose morals, and psychopathic homicidal tendencies that even the most hard-case of vicious thugs would need to be wary of. It isn’t long before two hapless local boys happen along and fall right into their clutches, thinking they’ve lucked out big time to happen across some obviously loose ladies in need of the help and “comfort” of some big strong men. Big, big mistake….

One blood-spattered double homicide later and the girls are back on the road and our film goes from it’s Black & White vintage look to a more vibrant color scheme with a wash of crimson gore. Expect a lot of character development and backstory to unfold? Nope… not that sort of “Road Movie” here…. The plot here is far simpler instead. As might be expected, our three violent vixens are simply on the run…. Having killed their drug dealing criminal boyfriends in what flashbacks show to have been an orgy of blood and horror that would have put Charles Manson to shame, they’ve decided to lay low in the little seaside cabin of Snowball’s ex till the heat is off. Honestly I’m not too certain how that’s actually supposed to work, since our girls are pretty much about as subtle as a pack of rabid coyotes, leaving a grisly trail of corpses in their wake, and always doing their best to piss off anyone they encounter along the way. But hey…. it’s a 70’s style “monster movie” so let’s just roll with it. 😉

Once they reach the seacoast hideaway, it isn’t long before they manage to upset their neighbor in the next bungalow, local crazy old coot Joseph (played by Norman Yemm). One look at them and he just knows these girls are trouble… and not just the kind of trouble you can cure with a shot of penicillin either. 😉 As our film’s resident “local crazy ol’ loon” naturally he knows all the important stuff about the giant monster lurking in the ocean hereabouts…. and naturally he’s not gonna just making things simple by spilling the beans on that stuff easily.

Nope…. he’s just cranky and insistent that “You girls just shouldn’t go in the water… it ain’t allowed!!”. Yeah…. like any of THESE girls are going to take any advice from anybody. Luckily for us, he’s got a sweet teenage granddaughter Hannah (played by Kyrie Capri) to keep him from getting our ladies pissed off enough to just plain kill his crazy ass. 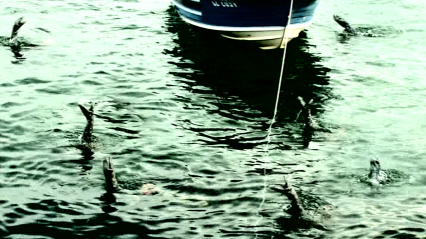 Now, it’s pretty obvious that Hannah is our real heroine in the movie. She’s shy, sweet, lonely, and so darn naive that you just know she’s going to be utterly fascinated by our vicious trio and get herself into trouble. She’s so darn cute and innocent that our wicked girls can’t resist having a little fun with her….. That takes the form of poor Hannah getting pretty darn drunk and wasted that night partying over at their bungalow, while our monster, awakened by their earlier frolicking about in the surf, surfaces to eat most of the rest of the local fishermen, and carry off Snowball who’s sleeping off her drunken stupor out on the pier.

Next day…. after poor Hannah stumbles away, sick and ashamed of herself and the stuff she did the night before, Beretta and Blondie go in search of missing Snowball. They find her of course, wounded and dying, along with the remains of the fishermen somewhere up the beach. Mad as hell at the death of their friend, our two hellcats decide to get to the bottom of things and beat the truth out of old Joseph as to what the hell is going on.

They confront him and Hannah and finally get the truth of what happened some 20 years earlier when the monster first came ashore and killed most everybody in the town, crippled him and left Hannah an orphan. He’s kept all that a secret, dreading the day the monster would return. Before much more can happen, our creature strikes, and attacks the bungalow. Beretta and Blondie fight like the crazed psychopaths they are with every pointy sharp implement of mayhem they can lay their vicious little hands on, but nearly die until plucky Hannah decides to conquer her fears and stand up to the monster alongside them, shotgun in hand, to protect herself and her granddad.

This final fight is short but sweet… with all the slimy tentacle action you might want. It’s mostly lots of good old school practical effects…. horribly dated and phony looking of course… but absolutely perfect for the mood and ambiance of a film trying to capture the sheer fun of those old movies. Do our ladies save the day? Well…. if you’ve seen the old movies that inspired this one, you know that not everyone will make it. Neko’s not gonna spoil it for you, but it’s a tradition that in all “Road Movies”, somebody drives off into the night (just in case there’s a sequel, Heheheh!!) while somebody stays behind to carry on alone.

This one is an odd little film. I honestly didn’t like our vicious trio of anti-heroines…. but still you can’t hope but root for them once the monster arrives. Hannah, while a very sympathetic character overall, didn’t impress me either as a heroine, being far too passive for most of the story. Granted, this sort of film is really hard to pull off if you want to use the idea of the “anti-hero” without giving that character (or in this case, characters) a chance to make a redemption of sorts and show that beneath their violent and homicidal natures, there actually exists a tiny piece of humanity that sets them somehow above the Evil that they encounter and must ultimately destroy. That doesn’t really happen here, not surprisingly given the short run-time of our story, and ends up leaving “El Monstro” feeling like less of a complete story, and more of a simple slice of something that could have been more satisfying.

Still…. the film does hit all the right marks visually, and the musical score really invokes that old “grindhouse” feeling much better than many other bigger budgeted films that have tried to capture that. Surprisingly, they even managed to do it all without needing to resort to any of the gratuitous sex or nudity you might expect….. (Sorry guys…. Neko knows how most of you were soooo darn hoping for a wee bit of that, Hehehehe!!…..) Given that, I can easily recommend this one as a fun evening’s romp through the monster movie goodness of yesteryear and give it 3 “Meows” out of 5 with several well earned purrs of appreciation for the stylish cinematography and perfect cast of excellent actors and actresses… especially our crazed killer “girls gone wild”.

The Region 1 DVD is good as might be expected, with plenty of extras, audio commentaries, interviews, and behind the scenes stuff as well as a couple of neat little “no budget” early short film efforts by Director Stuart Simpson and some of the others involved in “El Monstro”. Not bad for around 10-20$ US. Like old school rubber monster exploitation action? Then this one ought to suit your tastes pretty well.

Trailer? Yep… we’ve certainly got that sorted out, as fresh from the Trailer Park comes this juicy look at this crazy film.