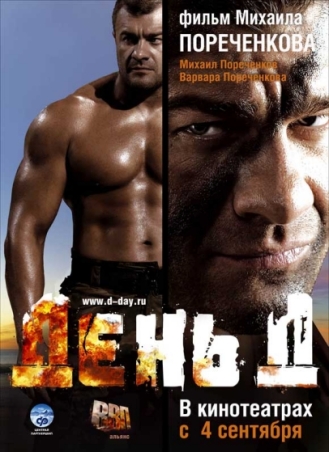 This time out your Favorite Catgirl is tickled to report that yet another of those reeeeally hard to capture cinema goodies that’s been on my “most wanted list” for a few years is… at last… finally mine!! It’s “Den’ D” aka “День Д”, the 2008 Russian rip-off remake of Arnold Schwarzenegger’s 1985 testosterone overdosed combat action epic, “Commando”.

Our synopsis? Seriously? I mean… didn’t you see “Commando”? If you did, then basically you’ve got the plot already, but if you haven’t, then how about this: “Former paratrooper Major Ivan Vanya (Mikhail Porechenkov) is forced by a renegade ex-member of his old Spetsnaz team into their plot to assassinate the Estonian president or his kidnapped daughter Zhenya (Mikhail’s real life daughter Varvara Porechenkova) will die. Tricking his captors, he escapes and begins to hunt for his daughter along with the help of plucky stewardess Aliya (Aleksandra Ursuliak) and plan a violent revenge against her kidnappers.”

Never released outside Russia itself… for obvious reasons 😉… it’s only been available on a Region 5 PAL formatted Russian disc… with no subtitles, English or otherwise. I’ve been just itching to see it, as I’ve heard oodles of fun things about this one, but have never found any sort of fan subs to enlighten this kitten as to exactly what’s happening plot wise. Still…. thanks to my incessant prowling about the far recesses of the Internet, I finally scored those illusive lil’ subs… in reasonably passable English, and a wee bit more searching nabbed a copy of the DVD itself, so I could at last satisfy my goofy curiosity.

Intrigued enough to wonder if you’d want to see if this odd lil’ film just might be a “must see” for you too? Then c’mon!! Don’t be shy…. Let your Favorite Movie Lovin’ Catgirl tell you all about it!!

Hehehe…. it seems that Mikhail Porechenko, Russian film actor, producer and director, is a real fan of the old Arnold Schwarzenegger film “Commando”…. So much so that back in 2008, he actually produced, directed and starred in “D-Day” (“День Д”) an almost scene for scene unauthorized remake of that lil’ action blockbuster.

I first heard of this waaaay back then when the first rumors of it’s existence started floating about. Now …. while perhaps not the best film ever made…. “Commando” is unarguably a pretty good example of the simple 1980’s action movie at it’s best. An easy to grasp plot… suitably nasty villains for the audience to hate and our hero to dispatch in any number of brutal combat sequences…. a sweet little girl to save, a sexy woman to help him do it…. and plenty of scenes to let Arnold show off that bodybuilding physique of his in the most macho fashion possible.

It’s a simple revenge story…. good versus evil at it’s simplest and works on that most basic of levels. If you are a wannabe action hero looking for a story… you could do a lot worse than to “borrow” this one…

And “borrow” Mikhail certainly did… Watching this one was an amazing slice of cinema “deja vu”, as it follows the original film’s story almost perfectly shot for shot throughout.

I can honestly say I haven’t seen anyone shy of the Hindi film industry, or the perhaps the Turkish, doing as close a copy of any film as this one is to it’s American “cousin”. We start off just as in “Commando”, with the murders of the members of the old Special Forces Unit. The first… a shooting by two guys driving a big ol’ truck almost an exact copy of the original…. then something a bit different.. as we get a shooting of another while he’s at his job training dolphins at an aquarium.

Then comes the faked death of “Den’ D”s turncoat villain Bennet… errrr… ummmm… I mean Gelda (played by Bob Schrijber) by car-bomb. Unlike the original, very little attempt is made to actually trick the audience about this… presumably because even Russian watchers must have seen “Commando” for themselves.

We get to see Ivan at his rustic mountain home… skydiving off a cliff and playing dad with his beloved little daughter Zhenya (played by Varvara Porechenkova). Then his old boss Colonel Philippov shows up… tells him the bad news and leads Gelda and his mercenaries to Ivan’s hiding place.

There’s the shoot out… the kidnapping… and yes… that crazy chase down the mountain… but this time our hero rides after the evil guys on a snowmobile. A neat change that actually works pretty well while giving you a taste of the less “Schwarzenegger” approach that Mikhail seems to prefer for his rugged portrayal. In almost any scene where Arnold would have wanted to push an image of almost herculean strength, our Mikhail prefers a more “realistic” solution to a problem.

A pity given that he certainly has the look of a guy who could let his muscles do the talking, but… the results are still good overall, and in at least one scene, even an improvement. Which scene was that you ask? Why that goofy escape from the airliner during takeoff as the bad guys try to escort our hero on his mission to kill the Estonian president. Arnold… larger than life superman… simply threw himself out of the plane and miraculously survives the fall into a swamp with nary a bruise in his version. Mikhail’s Ivan wisely chooses to steal a parachute from the cargo hold supplies of a parachute club traveling on board to make his escape. A good believable substitution, especially given Ivan’s VDV paratrooper backstory.

As in our original film, the bulk of things then unreel as Ivan meets sexy stewardess Aliya (played by Aleksandra Ursuliak) and uses her to trap slimy Sully…. errrr, no, wait a minute… I mean Stasik (played by Mikhail Trukhin) and beat the location of Zhenya out of him before giving him his just deserts.

Yep…. it’s time to equip themselves with all the firepower they’ll need for Ivan to fight a small war, and creatively…. given this is taking place in Russia and not Gun-crazy America…. he breaks into the illegal weapons smuggling fish market of one of Stasik’s buddies to arm up in suitable fashion.

One stolen seaplane later and Aliya flies him to our main villain’s secret hide-out on one of the Kuril Islands for the big shoot em’ up climax. Yes, yes…. just like in the original Aliya calls in Colonel Philippov and the troops to back him up, but you just know they’re only going to mop up the mess once our hero finishes shooting, stabbing, barbecuing, and blowing up every bad guy he manages to get his hands on.

Yep… there’s a final macho hand-to-hand battle between Ivan and head thug Gelda, but as “boss battles” go, it’s lacks the overall “ooomph” of the original. Still… I have to admit, Gelda’s freaky “knife swallowing” death in a vat of caviar was certainly different, I’ll give them that. At the finish… our hero saves his little Zhenya, gets the sexy Aliya, and heads off into the sunset and whatever else it is macho action heroes actually do for relaxation in between the moments of crazy vengeance driven mayhem that seem to fill their lives.

So…. what did I think of this one? Well…. compared to the original, it’s easy to see that the budgets were nowhere near comparable. Still… “Den’ D” manages to be a respectable little action film and was a hoot to watch. The cinematography was good, with reasonably done action sequences given the budget. The acting was pretty good too, with Mikhail doing his best to carry the rather intimidating task of being Russia’s answer to Arnold Schwarzenegger. He’s got the look… he’s got the muscles… but he doesn’t quite have that combination of both menace and charm that Schwarzenegger can pull off when he’s at his best.

Mikhail’s daughter Vavara is also good here too, playing a spunky and likable character without most of the melodrama of Alyssa Milano’s same character in the original. As the film’s love interest and eye candy, Aleksandra Ursuliak is pretty good too… a much better actress than one might expect in such a frivolous role. In fact, all in all most of the cast manages to do a great job of interpreting the originals, my only disappointment being Bob Schrijber’s role as Gelda… honestly, a much less intimidating villain I could not imagine. He comes across less as any sort of real danger than as a pudgy out-of-shape laughable annoyance. Mikhail deserved a better final opponent to make that last fight a true “battle of titans”.

My rating for this one? Now… you have to remember that this wee Catgirl is goofy for such silly films.. so I’m probably exactly the sort of audience they were shooting for, but even so I can still give “Den’ D” easily 3 “Meows” out of 5. It’s simple, unpretentious, and certainly an unashamedly goofy rip-off of a better film, but if you take it as what it is, it’s also an enjoyable look at that original movie as seen through they eyes of a foreign audience hungry for their own hero cut from the same cloth. So should you rush right out and find your own copy… spend hours searching for subtitles… put them together and spend an evening convincing your girlfriend while you both watch it that you just might possibly be as hopelessly nutty as a fruitcake? Probably not…. But… if like a certain silly Catgirl, weird and goofy films are your thing, and you think that “Turkish Rambo” is also a fun evening’s movie entertainment… then you probably will want to give this one a try too.

Yep… there’s actually a Trailer available and here it is!