Our latest Review brings us back to Malaysia for a look at 2011’s ghost/ comedy “Alamak… Toyol!”. Do you like your movies to be a weird fusion that becomes like an Asian version of “Abbot & Costello Meet the Ghost Kid”? How about with a wee bit of “Beavis & Butthead” thrown in for extra flavor and big ol’ dollop of potty humor to season things? No? Then you are certainly smarter than your average goofy movie lovin’ Catgirl Princess…. 😉

Synopsis? Hmmmm? I guess we could use one… “Pak Umar needed a way to get rich quick, so he bought an imp (toyol) from a witch doctor. However, he didn’t have much money, so he chose the cheapest one. One day, Fakhrul and Kudin, two best friends who just so happen to be thieves, decide to rob Pak Umar. Having no money, he hands them the imp. Unfortunately for the two friends, the imp isn’t any good at stealing, so they decide to seek out Pak Umar to force him to take it back. However, after some desperate pleading from the creature, they allow the imp to have another go. Little do they know that the imp would try to steal from Farah – a sexy girl who is having trouble with her boss, a drug trafficker named Daniel. Fakhrul and Kudin end up having to save pretty Farah, while at the same time trying to trace Pak Umar and unload their worthless supernatural “thief”.”

Ummmm? Ok… now wait a minute…. that actually sounds pretty good. Malaysia scored a big hit with this wee Catgirl the last time they tried that tricky mix of scares and laughs (and a wee bit of sweet romance….) in “Tolong! Awek Aku Pontianak!” so they already had me interested. And that goofy poster!! How could I not take a chance? Honestly… how could I miss this one… I’d always want to find out if it was as fun as it looked. Finding a new Malay DVD source gave me the perfect excuse to find out.

Wanna know how it all went? Then you know what you have to do, right? 😉

The “toyol”…. now that’s certainly a new one on me… but luckily for wee lil me… ever-so-handy Wikipedia is there to illuminate and educate this goofy lady on the particulars of this Malay ghost legend.

“Toyol” or “Tuyul” is a small child spirit invoked by a bomoh (black magician/ shaman) from a dead human fetus using black magic. It is possible to buy a toyol from such a bomoh. The toyol may then be used to steal things from other people, or to do mischief. A toyol is considered to be childlike in their thinking. Easily distracted, valuables can be protected by scattering beans on the floor, or leaving sweets or toys next to them, all of which will fascinate the toyol. It is said that the owner of a Tuyul may become rich, but at the expense of the health, fortune and even the lives of members of their family.”

OK… that sounds like there’s some serious fun to be had if you are so inclined to have your very own crazy lil’ green goblin that lives in a spirit bottle as a pet. Kind of like a macabre version of “Pokemon” gone so terribly, terribly wrong, Hehehe!! If only it were that much fun…. sigh. 😦

There’s a lot of great promise to the idea behind this one… but unfortunately for me, it somehow went all to waste… ending up in a fairly amateurish unfunny mess of a film. Dang it all…. 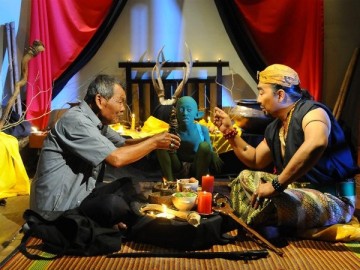 I suppose part of the problem lay with the disc itself. Well… a good part of the problem really… It featured that annoying new copy protection scheme I’ve run across on Malay films by a single distributor (Dallas Entertainment Pte.) a couple of times before. Yes… that stupid one where they blur the image ever so slightly out of focus for around a minute or so each and every 10 minutes throughout the entire film. Grrrrr!!!! Arrrghh!! This is soooo damn stupid and annoying!! If any Malay DVD distributors are reading me here at the ol’ Litterbox take this wee Catgirl’s advice and CUT THIS OUT!!! Really…. just stop. Now. I bought your movie… legitimately… spent long hours trying to find a seller waaaay on the other side of the world… had it shipped to me at a postage nearly equal to this cost of the disc itself…. waited nearly a month for it to arrive… and this is how I’m rewarded for my honest efforts? Wanna discourage piracy? This isn’t the way to do it…. but it is a great way to discourage actual sales of your DVD’s if that’s what you are trying to do. (Get the sense I’m a really… reeaaallly peeved lil’ Catgirl? ‘Cause I am…. 😦 )

Whew… now that I’ve gotten that rant off my chest we can get on with a look at the film itself. Here we get absolutely nothing special or remarkable. Our story mostly centers around a hapless pair of thieves, Fakhrul and Kudin (played by Angah Raja Lawak and Along Cham respectively) who absolutely suck at their chosen profession. These two have to carry our story and are obviously styled after all those “Mutt and Jeff” comedy teams like Abbot & Costello or Laurel & Hardy…. you know the idea, one big fat guy… one skinny goofy guy…. their mismatched silly antics are always hilarious, right? Apparently not. It requires one additional thing to actually work… a chemistry between the two that makes them feel like friends and makes you like them no matter how stupid and hapless they might be. We don’t get that here. Maybe it’s a matter of “culture clash” for me, but I don’t think so…. I’ve watched a lot of films from Asia and this pair plain just didn’t work… on any level. A shame much of the film is spent following them around as they go from one unfunny failure to another.

OK…. so maybe if there is a love interest…. now that always works. You know… a pretty girl who sees the hidden gems within our two heroes and helps them to discover that quality within themselves to be the men they should be. Well… we do sort of get that plot idea here… but again, it’s underdeveloped and badly mishandled overall. That role in the story is filled by Farah (played by Adeline Tsen), a lovely young “office lady” who accidentally discovers her boss Daniel (Tyzo Tuah) is secretly a Drug trafficker and gets into terrible danger as Daniel’s thugs try to kill her before the police start taking her allegations about their illegal activities seriously. However… there’s really no hint of budding romance involved… just a bit of peeping at her as our two goofy thieves try to rob her house one evening. They nearly get all killed by the thugs, who choose that particular moment to show up looking for Farah, but are saved by their little green goblin who scares them away.

Ahhhh… our little toyol…. now this is the one shining part of this whole mess of a film. Played by child actor Afiq Izzudin, it’s the single one thing the movie actually gets right. He steals almost every scene he’s in… with his crazy antics and a great effective make-up job that fits the character of the toyol perfectly. He’s both cute… and yet disturbingly demonic all at the same time. He gets more done in this film… without a single line of dialog… than any other actor in it. He’s sympathetic and you want to like him even if he is supposed to be an evil spirit that interacting with is forbidden by Islamic belief. Like all toyol… he’s supposed to be a masterful and supernaturally unstoppable thief… or “stealer” as the subtitles translate him as, but the idea is that he’s too foolish and silly to be a good thief so he becomes a burden instead to those who are bound to him. Great notion… Neko just wishes he’d had better owners….. Sigh.

Naturally the climax of the film involves Farah getting kidnapped by Daniel and our worthless duo try to save her, less for romantic reasons than just plain lustful ones. This could have been the perfect place for a great slapstick comedic “assault” on Daniel’s heavily guarded hideout by our two “heroes” and their toyol, but sadly there didn’t appear to be money in the budget for anything that elaborate. Instead, they just rush in, get captured, get threatened, and ultimately only get saved from a miserable death by the timely arrival of the Malay police. Boring…

Wrapping it all up, I have to say, “Alamak… Toyol!” earns only a paltry 2 “Meows” out of 5…. it escapes the dreaded 1 “Meow” rating only because of Afiq Izzudin’s efforts as that cute lil’ toyol. Him, I liked a whole lot. Everything else here, not so much… Such a great idea…. but so darn badly realized. Now, if there was ever a film I’d like to see re-made… maybe given a second chance… this one would be it. But it’ll never happen.

The disc? Well…. I think I already covered my feelings on that front. About the only good part of this release is that it was a wide-screen Region Free NTSC disc with adequate, if not inspired English subtitling. However, if… even after my review… should you still want to see it, I would make very certain you didn’t have to pay anywhere near as much as I did for that dubious “privilege”. Here’s hoping my next foray into Malay film goes much, much better…..