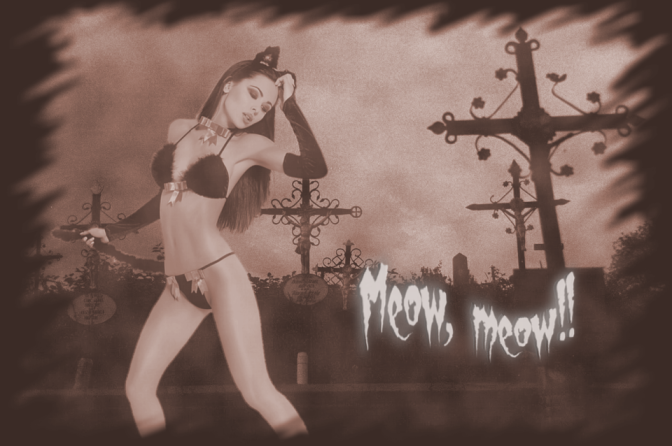 Another week… and more fun and games as I get in the spirit for my most favorite night of the year.

Despite my best efforts to clear some time for the ol’ Litterbox and the reviews I so badly wanted to write, it’s been an uphill battle for me to actually accomplish anything lately. The usual culprit, my work, has been the main reason I’ve fallen back. I lost yet another cook, and it’s resulted in an increase in my workload between covering a couple extra shifts as well as interviewing potential replacements… something I just plain hate. I’m a cook… and I hate the more managerial aspects of my position as kitchen manager. I’ve always been somewhat shy around strangers, and that makes for difficulty when needing to interview new people. But… that’s the job, so I pluck up my courage, follow my instincts, and try to put on my serious “business face” to just plain get it done.

Still….. in the midst of all that, have I managed anything else fun lately? Guess if you wanna know, you’ll have to follow your instincts and just “Read On”, now won’t you?

Although I’m pretty tired lately from all that extra effort at the restaurant, surprisingly I have actually had some personal time for lil’ ol’ “Me”…. It’s been pretty hit-or-miss, but it’s been there…  I’ve been using it mostly to plan for Halloween and to share time with Carolyn at the gym or on other things we can do together rather than just staying all cooped up at the apartment now that the weather has turned both cool and damp. About the only TV time this last week was Sunday night for the season premier of AMC’s “The Walking Dead”…. that was a given…. even Carolyn knew there was no way yours truly could miss out on my weekly “zombie fix”. Also… it was sort of cute the way she pretended she wasn’t really interested…. I knew she’d gotten hooked on it and its more character-driven story when we watched it last season and as expected, she got right back into the swing of things within the first few minutes. Sigh…. my sweetie secretly likes zombies! You gotta love the idea of a “soap opera with zombies”… always something there for everybody 😉

And…. we got to “sit in” on one of the Wushu classes at the college the other night. Kind of a little teaser to see if we might want to actually plunk down our cash and join in full time. It was soooo darn intense! Carolyn found it really fun and much more of an aerobic workout than she’d been expecting, even though we got to do only the most basic warm-up stuff. Me… I liked it, but it certainly is going to push me physically if we go this route, and it’s likely to be years before we even get anywhere close to doing well at it. I think it’s probably going to be more ambitious than realistic, but that just might be inherently timid lil’ me reacting in my usually careful fashion. The kickboxing classes are definitely out…. Carolyn told me there’s absolutely no way she could enjoy herself if she was constantly worrying about seeing me get banged up or hurt doing that sort of thing… and with kickboxing it wouldn’t be a matter if but just one of when, that would happen. Oh well…. I really want to learn a sword technique anyway, so if the Tai Chi classes offer it, I’m thinking that’s probably going to end up being our choice. There was one other possibility I found… and it might be a neat option…. a women’s self-defense course that has all that “judo meets jujitsu meets karate” stuff to let tiny little women like me punish the bejeebits out of unsuspecting bullies. 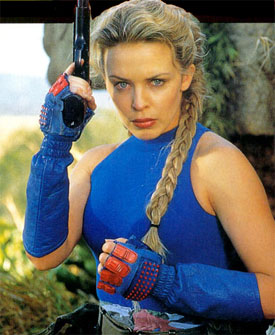 Never really considered it, but hey… you never know, it might be fun. Something I’ll definitely have to think about.

Our costumes are proceeding… and Sam has decided she wants in too! She’s going all “sexy lady ninja” to fit into our “theme”…. something she thinks will be an easy costume choice. Ahhhh…. and our visit to the Wushu class found Carolyn a pair of old black sparring gloves we were able to sweet talk out of one of the senior students to use for her Cammy costume. I added some camouflage face paint and an old military pistol belt I found in a thrift store and now Carolyn is ready to go! (She just tells me I probably just want to have all the naughty fun of painting tiger stripes on her legs like in the picture I found…. and by goodness, I really do!! Hehehe…. )

My costume is just about done too. I kept trying to find just the perfect basic dress, but it’s been hard to get one that looks Chinese enough…. The perfect ones are all waaaay too expensive, or the wrong color, or just plain unworkable for the look I’m shooting for. I finally decided to go the route of having a dark gown to contrast with the stark while wig and for the base, I found a decent black “witch’s gown” that had long flowing sleeves and was floor length…. a trip to the fabric store got me some lovely black silk silver embroidered phoenix brocade to use as trim that went a long way towards making it look more “Asian”. A long scarlet silk “kung-fu” sash from an old anime costume in my “cosplay trunk” for a belt along with a pair of black brocade Mary Jane slippers and I’ve got to say… seen all together, it doesn’t look half bad. 😉 About the only thing I might add is some jewelry and maybe one of those wonderful Chinese sun hats made of rattan or bamboo. That is… if I can find one in time.

So… It seems that’s pretty much all for this time out. If I’m a luck kitty, I’m going to try for another review or two soon, but, rather than jinx it, I’ll keep from promising anything right this minute… that way it’ll be more of a Halloween Treat if I do actually manage to pull it off. Till then… get your candy ready… your costume straightened out… and prepare for the fun. It’s almost here!! “Meow, meow, for now!!”