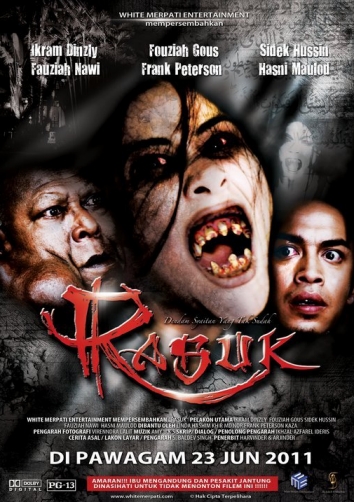 This time out, a look a one from the big ol’ pile of Malay horror films that have been showing up in my mailbox the last month or so. “Rasuk”… which if my researches is correct, translates to “Possessed” or something along those lines. (Psst!! Any of my Gentle Visitors with a better grasp of Bahasa Malaysia can chime in anytime if I’ve messed that up and I’ll fix it… Hehehe!!)

Our synopsis for it reads: “Arman (Iqram Dinzly) and Melati (Fouziah Ghous) move to an old Malay bungalow that has been built during the Japanese occupation era. They want to escape from the hustle and bustle of city noise and live a peaceful life. However, everything changes when Melati accidentally digs beneath a stone located near their home.

After the incident Melati is in a weak condition and faint easily. Various strange events also happen after that. Zaiton (Fauziah Nawi), Melati’s mother-in-law who comes to visit them, dies suddenly without explanation. Soon Melati gets possessed and harassed by evil spirits in the absence of Arman. As a result her body suffers from bruises.

Pak Mail (Sidek Hussain), who works as a gardener at their home finally reveals the mysterious incident affecting Melati is related to a Japanese soldier who had been captured and killed here during the war. The family then decides to move out and call a shaman to ward off the evil spirits from the house.”

Hehehe… if you’ve looked at the poster for this one, you can easily see why your Favorite Catgirl moved this one right to the top of the “To Watch” pile. Will it be as creepy, scary, and good as this nasty cover? Guess I’ll find out… and you can do the same by just going ahead and readin’ my full Review….

Most Malay and Indonesian horror movies I watch don’t do the whole “Exorcist” style “possession” thing all that often. Most usually they’re about some begrudged ghost or spirit thingee out to get some payback from some really dumb person that didn’t be a nice lil’ boy or girl and follow the rules of polite society. Given that, I thought this one might just be a nifty change of pace from the usual “hopping ghost in a bag”, our friend the pocong, who seems to dominate the films of this region, or one of the various Hantu spirits who’s amazing diversity I’ve yet to really get a handle on. 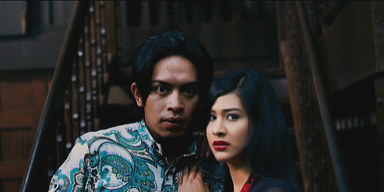 This one starts out as young couple Arman (played by Iqram Dinzly) and Melati (played by Fouziah Ghous) move into an exquisite old traditional Malay house that Melati has inherited. The “House of Love” as it is called (for reasons that escape me and which really aren’t explained in the film) has been in Melati’s family for generations. It seems like the perfect place for the two of them to settle in and make a life. There’s even room to move Arman’s mother Zaiton (played by Fauziah Nawi) in to live with them. They’re all very close, and Zaiton couldn’t be happier that her son has married such a lovely girl as Melati, whom she loves like her very own daughter.

Sounds like everything is going to be perfect, right? Ummmm…. it’s a horror movie… let’s not forget that, shall we, Hehehe!!

The first indication that maybe things aren’t going to be turning out so well is their first encounter with their new gardener Pak Mail (played by Sidek Hussain). Now… he’s certainly a creepy sort. He roams about the house mumbling and having weird fits… usually while waving a big pointy machete… and he’s got this… gigantic thing… growing out of the side of his face.

(Pssst!! I don’t think it’s makeup either… I’ve seen this actor in another Malay film “Karak” complete with the same humongous tumor or whatever it is. This lil’ Catgirl feels truly sorry for him…. I can’t even imagine being stuck with something like that.)

Now that’s plenty strange… but not really the problem they should worry about. What they should be concerned with is the dead Japanese Army officer buried out in the garden.

He got tricked, betrayed, and murdered by Melati’s grandmother and Great-grandfather back during the Occupation, his corpse buried and forgotten. But he’s never forgotten the Melati he lusted after and died because of…. and naturally our Melati is her spitting image all these years later. Crap…. I mean… it’s always nice to inherit your beautiful grandmother’s good looks, but isn’t it just terrible when she’s also got “skeletons in the closet”… errrr, I mean garden… that come along with them as a package deal.

Naturally, it’s poor Melati that makes the mistake of digging up and disturbing his unmarked grave while planting a tree one afternoon releasing that evil spirit and starting all the trouble once more. The spirit possesses her… making her deathly ill and using her to seek revenge on all those around her. They take her to a doctor of course, but he’s not really any help… and given his somewhat eccentric fixation with laughing all the time, even when giving you terrible news, he just plain creeped this lil’ Catgirl out more than our freaky gardener.

Can’t say I’d want him as a family physician… nope. Not at all. He just keeps giving Melati vitamin shots… that and making blunt insinuations that’s she’s probably mentally ill with multiple personality disorder and should be under psychiatric care.

Arman and his mother try to keep her safe and do what they can for her, but before long our evil ghost kills off Zaiton, scaring her into a heart attack one evening when she’s alone.

Seems she was just a bit too religious for the ghost to stand having around… and there was that pesky notion she had about having a Holy man come by to bless the house. Yep, she just had to go. So what’s Arman to do now? Why start experiencing these nasty supernatural events himself.

The ghost… in Melati’s form.. lures him from the house and tries to feed him to a carnivorous tree out in the jungle. Luckily, some local guys happen along at just the right moment and chop him loose with their machetes. He’s hurt bad, but hey… no worries… they know a Witch Doctor/ Shaman guy who can fix Arman right up. After that, they take him home and promise to have the Shaman come by the house to dispel the darkness that even the simplest of them can sense lurking here. Is that gonna happen? Nope… Our evil ghost kills them all in the jungle before they can do anything as useful as all that.

So it’s back to “Doctor Giggles” for help… who still refuses to believe in any supernatural explanation for it all. Not after he’s seen Melati do her best “Exorcist” imitation of Linda Blair… not after he’s seen her do the floating in the air gag… or the always crowd pleasing “spin the bed” trick.. and not even when she outs him, revealing her impossible knowledge of his sick perverted secret habit of drugging and molesting his female patients. It just drives him away… angry, shaken, but defiant, before killing him in a fiery car crash on the road. Awww well… at least he deserved it… and it did finally stop all that annoying laughter. 😉 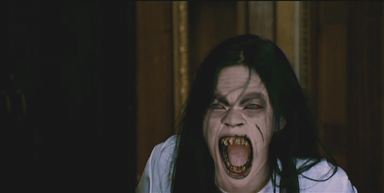 Confused and wanting all this evil to stop, Arman blames creepy Pak Mail for everything that is going on, but he is blameless and finally tells the story he’s kept secret of the murder of the Japanese officer and how Melati has come to suffer thanks to the deeds of her ancestors all those years ago. He and Arman manage to restrain Melati… who is coming to be more and more under the control of that evil ghost as it’s power grows stronger, and decide that only the intervention of an Imam from the nearby Mosque can save her.

We get a fairly nice climactic showdown, as the Holy man comes to them to battle the evil spirit. There’s all the usual stuff you’d expect, lots of mutating shrieking monster stuff… lots of prayers and threats of Holy punishment for the wicked spirit…. all shown in fairly decent special effects. It’s a Malay film, so naturally the forces of Good win, and the evil ghost is banished back to Hell in properly fiery fashion by the ending reaffirming the power of Faith and Love. Yay!!

This one wasn’t a bad lil’ film at all. Nicely simple… easy to follow, and not harsh or preachy in it’s message that Good will always triumph over Evil. They didn’t even dwell on the distasteful unpleasantness of the Japanese Occupation beyond using it as springboard for their evil spirit’s origin. They just told a nice simple little ghost story. Not bad at all either, with good acting and nice sets and effects. It was well worth this lil’ Catgirl’s time and effort to watch.  So Neko easily gives “Rasuk” a healthy 3 “Meows” out of 5 and can certainty recommend it to you if this sort of film is also your idea of fun. The Malay DVD is a good bargain too… and an absolute steal at around 6-10$ US. The English subtitles are a bit rough in places… and weirdly absent for almost every part where any Islamic religious stuff is discussed or mentioned… but mostly adequate to the task of letting one know what’s going on, plot wise. There’s also a “Making of” feature on the disc… and.. surprise, surprise.. it’s subtitled into English as well!! Always a plus, as that is truly rare in my experience!

Want to know more? Well, as always, there’s a Trailer…. and here it goes!