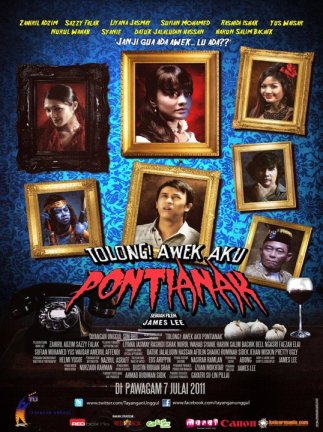 This time out, a look at another sweet, romantic comedy… with vampires… in Malaysia. Hehehe… just the kind of sweet, nutty horror/ comedy mash up that always makes your Favorite Catgirl Princess giggle and smile. I’m just a sucker for these things…. and this time it’s James Lee’s new Malay film,  “Tolong! Awek Aku Pontianak!” aka “Help! My Girlfriend is a Vampire!”.

Our synopsis goes: “Tolong! Awek Aku Pontianak” follows the naive yet kind Bob (Zahiril Adzim) who moves to a new apartment in a run-down building after having his heart crushed by his longtime girlfriend Ina’s decision to break up with him. He and his friend settle in to their new home and then he meets and falls in love with a peculiar woman neighbor named Maya (Sazzy Falak). Maya, who lives alone with her sister (Liyana Jasmay), harbors a dread secret and many of the others around her are beginning to suspect, that despite her pretty face, modest and shy behavior, she just might just be a vampire….”

I know… I promised to get around to reviewing “13 Assassins” by now, but this cute lil’ movie came along, and charmed me with it’s Trailer, so how could I not give it a look? With it’s resemblance to the Philippine film “Ang Darling Kong Aswang”, which your Favorite Catgirl watched a while ago, I confess I was itching to see the Malay take on the forbidden romance between Mortal and Monster. Ahhh romance…. Isn’t it always sooo much better with a few creepy moments thrown in to spice things up? Let’s waste no more time…. “Read On”!!

Our story begins, with the terribly romantic scene of our hero, Bob (played by Zahiril Adzim) …. yes, weirdly enough, his name really is “Bob”… parked alone with his girlfriend watching the stars and he’s ready to “pop the big question”…. His girl, Ina (played by Faezah Elai), seems happy to accept his proposal… and the crazy big diamond ring that goes with it. Then things go all flaky and she turns into a fang mouthed vampire thing right before his terrified eyes…. 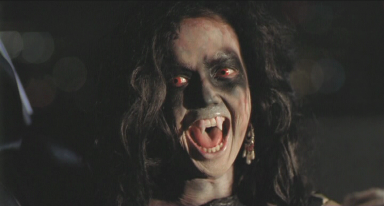 Once he wakes up, his roommate and best buddy Pian (played by Sufian Mohamed) tells him that this recurring nightmare just might be trying to tell him something important. Seems our poor Bob… while being about the nicest, most thoughtful person in the world… is also basically a hapless loser.

His girlfriend Ina  is just about at the end of her patience when it comes to waiting for him to “get it right” and start being the successful go-getter she wants as a potential husband. One more disappointing experience with Bob and his “budget friendly” car problems is enough to finally make her decide to dump him for bad boy biker and all around butt-head Eddy Santorio (played by Jehan Miskin).

Sigh…. So with his girlfriend gone, his work life going nowhere with all his ideas getting stolen by his immediate superior for use as his own, our poor Bob decides a change of scenery is in order. He and Pian move out of the overpriced digs he’d been maintaining for Ina’s sake and find their way to more… how shall we say… humble accommodations in a run-down apartment building on the city outskirts.

Ok, ok… so maybe it doesn’t have a working elevator… so maybe it’s rife with crime and immigrants, but it does have one thing that lifts poor Bob’s spirits. A pretty young neighbor named Maya (played by Sazzy Falak) living with her sister Lyana (played by Lyana Jasmay) in the apartment across the hall. They are Pontianaks…. but reluctant ones, cursed in some unknown way to live as monsters, but secretly longing just be be ordinary girls again.

From this point forward the delicate dance of love keeps our two lovers circling each other trying to see if they truly are meant to be together. Maya does her best to test our hero Bob… to see just how kind and nice he really is. Apparently shape-shifting is on the list of Pontianak powers, and in the guise of a confused old lady she gets poor Bob to nearly kill himself carrying a ton of luggage up and down the building’s stairs, looking to see if she can provoke his temper. Bob ignores his discomfort, doing his level best to bring that “old lady” to her son’s illusive apartment. He even returns at a later date, much to Maya’s surprise with a hot meal and to check to see that all is right with the old “auntie” he helped. But that’s just the way our hero is. He makes friends with the immigrants who live in the building with no trace of the xenophobic mistrust other Malays might show them. The more she see this, the more she can’t help but be drawn to him. 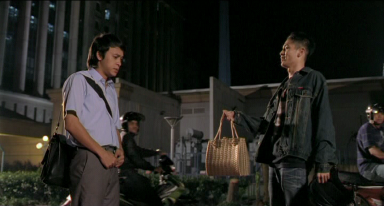 After a bad encounter on their first date with some biker toughs, he gets beaten unconscious to try to save Maya’s purse, a gift from her mother a long time ago. Angry at the gang, Maya saves Bob by drawing the nail from out of the back of her head and transforming to her true horrific Pontianak form to scare them silly and chase them into the arms of the police.

Then… hopelessly smitten with our hero, she spends her time nursing him back to health and even ends up being hired as a secretary at his ad agency. Here there’s some fun bits as Bob’s lecherous boss Farid (Rashidi Ishak) constantly tries to hit on her only to find out her secret one scary night at the office. Here’s where things get complicated in the way these supernatural love stories always do.

Farid and his sycophantic sidekick Kamal (Yun Waisar) enlist the help of Pian to “save” Bob from the “evil” clutches of his “vampire girlfriend”. This means hiring the infamous TV shaman Pak Harun to come and use his powers to drive away Maya and Lyana once and for all. That means arranging a trap…. and what better way to trap two vampire girls than at a costume party? (Ummmm? You mean there really are better places to do it?) 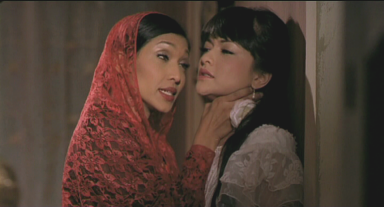 She’s going to end up crossing their paths of course, along with her nemesis, Pak Harun, and this has to lead to a big knock-down no-holds-barred fight between the good Pontianak sisters and their demonically evil elder sister revealing her terrible secret to Bob. So then…. Will everybody survive this one, their entrails intact? Will Maya and Bob find that true love conquers all, even the forbidden joining of Spirit and Mortal? Guess you’ll want to find out….. (Awwww… who am I kidding, of course our two lovers end up together…. It’s just that kind of movie.)

This one is a surprising lil’ gem of a film. Much of the success has to fall on the absolutely wonderful chemistry between our two leads, Zahiril Adzim and Sazzy Falak, who are perfect together, capturing a real sense of innocent romantic love in just about every scene they share. Along with this, the rest of the cast is spot on as well, never overplaying their rolls, even given the very broad and physical comedy on hand at times. Sufian Mohamed’s Pian is the perfect “best bud” for our hero, and there’s some real “bromance” at times on hand as well… sometime going to some fairly scary limits, hehehehe!! The odd little scene in which Bob awakens from his beating to find a worried Pian hovering over him like a grieving “wife” left me in stitches. Add in some goofy bits in which Pian and another friend are dressed as Na’vi from “Avatar” for the costume party, only to be mistaken by the shaman for “spirit folk” in need of exorcising and you’d be smiling as much a this lil’ Catgirl too. I have to say…. all in all, I liked this one a whole bunch!!

So Neko can give this crazy lil’ film a well earned 4 “Meows” out of 5. If wacky little romance horror comedies are up your alley, then you really should take the opportunity to track this one down. It certainly made me laugh at the funny bits…. get weepy at the romantic ones… and gave me a look at the Pontianak in the view of modern Malay folklore. A very enjoyable evening’s movie entertainment indeed. It’s a simple story, but not a boring one, and even my usually finicky Carolyn liked the sappy sugary romance with a wee bit of horror thrown in for spicy flavor. I’m thinking many of you will too. Director James Lee scores well with this one, trust this lil’ Catgirl.

The Malay DVD, by Golden Satellite, is a surprise too. It’s Region Free (despite being listed as Region 3) PAL formatted in a letter-boxed wide-screen presentation with fairly excellent separate English subtitles. There’s a nice “Making of” feature on hand, although it’s not subtitled and two music videos for songs used in the film, both of which are actually rather appealing even for a non-Malay listener. Available direct from Malaysia for around6 -10$ US, it’s a steal. But hurry if you want one… these Malay releases tend to disappear quickly once the initial pressing of discs are made and rarely get re-released.

Mmmmm!! And….. given that I liked it sooooo much, here’s the Video of the film’s “love theme” as an added lil’ extra to get you in the mood for some sweet love of your own…..

Ummmm? Trailer? Did Neko forget about that? Of course there’s a Trailer too, silly… and here it is!!