November has arrived…. so winter and all the nasty snow that comes with it can’t be too far away. Along with my usual preparations for the season, I’m still getting my regular shipments of DVD’s from far away parts unknown…. and you all know what that means…. Lots of warm evenings huddled on the couch and time for yet another review!! Yay!!

Our synopsis goes like this: “This comedy/horror movie tells a story of three youths from Kuala Lumpur; Punai, (Mazlan Pet Pet) a petty thief, Asmat (Cat Farish), a car jockey, and Johan (Sam Shaheizy), a salesman.

They each received a letter from the late Pak Sudir (Piee), inviting them to his house. Upon their arrival, they meet up with Pak Sudir’s assistant, Mustika (Lisa Surihani), and they discovered that Pak Sudir was actually their grandfather who happens to be very rich.

The three of them stands a chance to inherit all of his belongings and wealth but under strict circumstances; they would have to stay at his house for three days consecutively without touching anything, especially an old Congkak. On the first night itself, strange and hilarious occurrences begin to happen.”

I catch a lot of Indonesian films, as visitors here at the ol’ Litterbox might have noticed, but Malay ones are a bit harder for me to come across… Don’t know exactly why…. they just are. Maybe somebody will explain the whole situation to me, but I get the impression that they just watch a lot of the same Indonesian produced films in Malaysia that I manage to find as well…..

So…… Is this one gonna be any good? Is it gonna stink really badly….? I’m not at all certain….. and I’m getting a weird vibe from the cover art… but it does come with those nifty English subs I love for a ridiculously tiny price, so I guess there’s really only one way for me to actually find out…. and that’s for me to give it a watch and for you all to “Read On”.

This one starts out at an exorcism…. a promising start for a horror film… Seems the local sorcerer has died suddenly, and as is usual in these sorts of cases, is still possessed by the many evil spirits he’s controlled to work his magic over the years….. They’re a nasty bunch of troublemakers, and just because the old man is dead, they just don’t get to go away…… Bummer. The comedy starts right off…. making some reference to another film “Jangan Pandang Belakang”, also directed by Ahmad Idham, but unfortunately your favorite Catgirl missed that particular one and the joke slipped completely over my head falling pretty flat in the process. I wish I could say it was the only such one to do that, but this was just the first of many….. Guess most Malay humor is sorta like that…. I got very little of it, and those I did understand, I can’t say I found particularly hilarious….. must be an acquired taste.

Anyway, the villagers just want the ghosts to go away…. otherwise without the sorcerer to control them, they’ll get up to all sorts of mischief. What they don’t know is that the ghosts are just like all of the old man’s other possessions…. something that can be inherited and passed along. His disciple, the evil sorceress Mustica (the most interesting character in the whole movie) wants them…. probably to increase her mystical powers or something like that, but first she’s got to do away with the legitimate heirs to the old man’s legacy, three idiot grandsons from Kuala Lumpur who come to the village to inherit what they think is all the old man’s money….. Big… big…. mistake.

The guys show up, and again your Favorite Catgirl was left scratching her head trying to figure out who these guys were….. I’m assuming they are big comedy stars or music stars in Malaysia…. But to me they seemed… well, honestly… not all that interesting. Maybe they’re Malaysia’s answer to “Abbott & Costello”, but whatever mystique they have in Malaysia didn’t translate to me at least. No slam against them…. I usually get Thai or Indonesian humor and cultural references, but not this time. 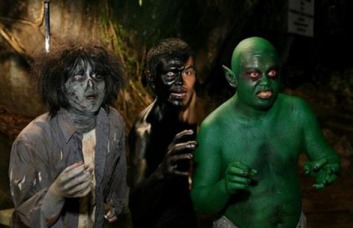 So… they watch Grandpa Sudir’s video will… and are told all his stuff is now theirs, as long as they stay 3 consecutive days at his home and not disturb anything while they are there…. Yeah, right, heard THAT one before. It takes all of an hour before they mess with the antique congkak board in the spooky ceremonial chamber and promptly get themselves possessed by three of Grandpa’s ghosts….. the Hantu Raya (a zombie looking thing that prowls the night eating chickens), our old buddy the Orang Minyak (the oily sex maniac maniac himself), and the Toyol (a little green demon who steals money).

The rest of our film concerns itself with the various hijinx that result from the nocturnal episodes where our heroes transform into these ghosts and wreak havoc around the village. Along the way, they manage to meet some nice local girls… fall in love…. run afoul of the prerequisite gang of local toughs who, of course, blame all the village troubles on “outsiders”…. Ah, and dodge Mustica’s attempts to kill them and steal the spirits. Most of this is somewhat amusing, if uninspired…. but doesn’t go anywhere daring or downright hilarious at all. Eventually we get introduced to the Mystic guy from the beginning of the film, who has a couple of funny bits… mostly dealing with how it’s much more impressive to travel by popping magically from place to place or by jumping out windows dramatically rather than simply using the door.

There’s constant Malay pop song references… most of which I missed, with the exception of Punai, who has crazy fits in which he sings Western pop song fragments as he transforms into the Oily Maniac….. (Say what?…), so I’m thinking these guys might just be pop stars. (Anybody wanting to let me in on these gys…. by all means speak up…. this poor lil’ Catgirl feels soooo lost on this.) Ahhh, yes…. and the fat gay shaman (I think….)….. didn’t get that part of the movie at all…..

Confused yet? I most certainly was…. but eventually we do get our big magic showdown between Mustika and the Holy man, everything gets sorted out, and our heroes get the girls. Thank goodness…..

Can’t actually say this one was really my style….. I’ll give it 3 “Meows” out of 5 mostly because the makeup and special effects weren’t all that bad…. the plot had some promise, and I’m assuming that stupid lil’ me just didn’t get half of the “in jokes”….. but that’s being pretty generous. I’m guessing most folk from anywhere outside Malaysia will be just as lost as I was, so it’s really only recommended if you are as goofy for quirky Asian stuff as I am. It’s presented in letterboxed format on the DVD with reasonable English subtitles… but be aware that they are often displayed very quickly, so read fast!! I’m soooo hoping my next Malay film is more like “Chemin” or “Congkak” than this one….. yes indeed!!

There’s actually even a Trailer available for this one! Here it is, for those of you wanting to take your own look…..