Another day closer to Halloween, and we’ve got another creepy Indonesian ghost story for you, “The Real Pocong”. Yep… our favorite “ghost in a sack” is back…. and this time it’s gonna steal away a cute lil’ girl forever!! OMG!!

Our synopsis reads: “Ivan (Ashraf Siclair) and Rini (Nubila Syakieb) have a beautiful child, Laura. After so much time without a house of thier own, finally Ivan has bought a small bungalow out in the forest. But from the first time they step foot in the house, Laura is afraid and feels there is something wrong with the place. Rini presumes than Laura just doesn’t like the lonely house and doesn’t want to live there. Ivan feels Laura just needs some time to adapt to living there. Then a mysterious cat is been found by Laura. With the arrival of this cat, Laura feels more comfortable and forgets her initial fears. One day while sleeping, Laura always hears a song never sang by her mother, Rini. Laura sings this song to Rini for next morning. Rini starts to believe there is something strange happening with Laura. Rini becomes very afraid and becomes upset with Ivan who has hidden the house’s tragic past. He doesn’t believe in bad luck or ghosts, and dismisses her fears as foolish. Laura gets lost on afternoon under wierd circumstances. Rini believes the loss of Laura was caused by supernatural; forces, but Ivan beleives Laura has been kidnapped. Ivan goes to report to police. After Ivan goes, Rini calls in a Paranormal to help find Laura. However the Paranormal is too weak to battle against the evil spirit that haunts the house…. What can be done to save Laura from, “The Real Pocong”?”

Yep…. creepy ghosts just seem to haunt Indonesia everywhere. And…. from this lil’ Catgirl’s perspective, that’s a good, good, thing!! It means oodles and oodles of ghost stories for lil’ ol’ me to enjoy, and plenty of opportunities to tell you all about them… so by all means, Gentle Visitors, it’s time to “Read On” !

Indonesian horror films just absolutely love the pocong…. and that enduring image of a corpse all tied up in it’s burial shroud is probably the most recognizable fixture of the entire Indonesian horror scene. Personally, your Favorite Catgirl Princess has never quite grasped what was all all that scary about the pocong…. it usually just sort of floats around in these films annoying folk and stinking the place up pretty badly, but occasionally, they let it actually do some fairly nasty stuff. Here in this film, for example…. it has the job of kidnapping children using illusion and magic to steal them away to the Spirit World. Now that’s a pretty frightening notion alright…. kinda like the bogeyman of our folklore or that monster from under our beds which all kids know just wants to drag us under there too…. never to return.

Also… unlike many of the more recent Indonesian films I’ve seen, this one doesn’t try to dilute it’s story with some lame comedy subplot to fill out the running time….. no sir, it’s pure horror here in “The Real Pocong”, and I, for one, was sooooo glad to have that for a change. Our story follows the plight of a young married couple Ivan and Rini who finally have managed to save up the money after years of struggling to be able to buy their own home…. every young couple’s dream, whether in Indonesia or anywhere in the world. Sure it’s tiny… sure it’s located waaaay out in the boondocks with practically no neighbors, but it’s all theirs, darn it…. and that’s what should count, right? Well… you’d think so, but somehow all those inexpensive bargain bungalows have their problems…. leaky roofs, cellars that flood in the spring, drafty bedrooms…. or, like this lil’ place, they could be haunted.

Rini doesn’t know that of course…. and hubby Ivan is too modern a guy to take such folklore seriously…. so you just know it’s gonna come back and bite them in the butt. Unfortunately, this wicked ghost has a need to steal away kids…. just like collecting stamps, but ever so much more fun, I guess. Seems this one is the spirit of the wife of a former owner…. raped and humiliated by robbers one night before her husband’s eyes she later kills herself out of shame, but not before poisoning her own daughter…. why I’m not exactly certain, but hey…. crazy doesn’t need a reason right? Even worse…. our happy couple have themselves a daughter too…. and she’s ever so cute, so you just know that ghost is gonna want to snatch her away too.

Laura (played by super cute lil’ Sakinah Dava Erawan) is downright adorable…. and she just made Neko’s heart melt as she became the main victim of the hauntings centered around the house. The pocong keeps trying to lure her away from her mom…. using her desire for a pet… a sweet little kitten, as the honeyed bait to trick her to going to the old toolshed in the woods where the mystic gate to the Spirit World is hidden away. She just knows something is wrong… but both mom and dad don’t listen to her…. and no matter how hard she tries, the spirit just wont stop following her…. until it finally does manage to take her away.

Rini loses it…. and then starts noticing all the weird things Laura tried to tell her about… like the piles of dirt that seem to show up everywhere the pocong has been. Ivan tries to dismiss her fears… tries to take charge and be logical about everything, but only manages to make things worse. 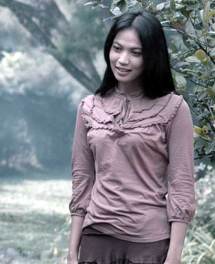 Who can Rini turn to for help? Dr. Nila, the nice woman doctor who lives in the nearby clinic? Maybe…. but there’s something strange about her…. Laura knew something was up with her, but she’s not around to warn her Mom exactly what she was afraid of regarding the good doctor…. Well, then how about the help of a good Paranormal? One ouija board session later and Rini knows all about the female pocong… her desire to replace the daughter she killed… and that the spirit is waaay to powerful for even the seasoned mystic to handle. D’ohh!!

With some nagging… she convinces Ivan to follow the Paranormal’s advice and use a magic charm to open the gateway between worlds… the only way to find Laura, but he only does it out of a desire to show her once and for all what utter bunk the whole thing is…. boy does he get a surprise!! Oh… and promptly dies, burned to a crisp freeing his little daughter from the 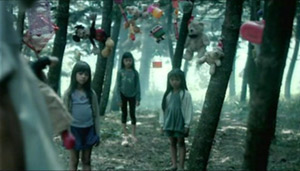 “Creepy World of Lost Children”…. This weird sequence is probably the best part of the whole film… the foggy woods filled with wandering little girls… the tress decorated with macabre toys and trinkets like some evil fairyland.

But then the pocong sets it’s sights on getting Laura back…. even if it needs to kill her to do it! Taking Ivan’s form… it returns to the house, and keeps trying to get Laura alone so it can poison her, then steal her spirit to take back forever….. Laura knows her dad is dead… saw him roast like a chicken on a spit, but will dear old Mom believe her?…… Naaaaww.

It’s only when the real identity of the ghost is revealed that Rini finally gets it together and faces the pocong at the toolshed for a final showdown for the life of her daughter. Will she save Laura? Well… Neko’s not gonna tell you, because you probably will want to see for yourself….

Hmmmm. This one is a nice little film… and has a particularly tricky and dangerous ghost to drive the chills along. Neko liked it a lot, and so I give it 3 “Meows” out of 5 for doing a good job of telling a good ghost story… certain lil’ touches garner it several nice “purrs” of contentment as well. The folklore is nice and consistent… the ghost genuinely scary, and little Laura is just such an adorable and endearing character that you truly feel for her as she struggles to survive this one. If there is any quibble at all, it’s with the simplicity of it all… and this one breaks no new ground in the genre, it just does what it does. What it does, though, ain’t half bad…. and that’s enough for lil’ ol’ me.

I saw this one on the official Indonesian disc, which comes Letterboxed, and subtitled into English, and has some more Trailers on board, as well as a nice “making of” feature on the film… mostly in Indonesian… but still worth a look. The price, as always for Indonesia stuff, can’t be beat….. so if it pops up for sale, you could do worse for an evening’s movie night than, “The Real Pocong”….

As always, there’s a nifty Trailer available, and here it is in it’s creepy entirety!Enjoy!