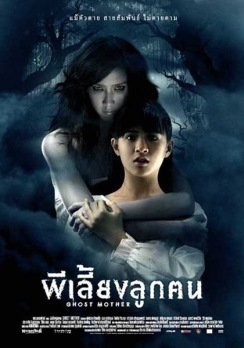 It’s time for another review, and this time out your Catgirl Princess has the spooky Thai chiller “Ghost Mother” aka “Pee Liang Luke” for you direct from Singapore, the latest of a number of Thai films released there with english subtitles….Yay!!

The synopsis for this one reads as follows:“Mother had left her 3 children and their father, remarried and went to live abroad. When the father suddenly dies of unknown cause, Nuntha had to care for her 3 niece and nephews that her brother had left behind. To earn money to support the children Nuntha sells soya milk and fried doughnuts in the morning.

It is an old family recipe handed down to her from her mother. She works hard and with love for her nieces and nephews. When Nuntha finds out that Chai, her dead brother had worked as undercover agent to gather evidence on powerful criminals due to an unfortunate misunderstanding she was murdered as well. Nuntha (Patcharapa Chaichua), even in her death still worries about her 3 nieces and nephews and how will they survive on their own so she continues to care for them as a ghost.

When Police Colonel Sumet (Thana Suttikamon), Chai’s superior officer finds out that one of his agents had peculiarly died, he started the investigation. He was astonished to find out that the one raising these children is actually a ghost of their aunt Nuntha.” Got it? OK, sounds pretty simple, eh?

The question would be then: “Is it really worth your time to seek it out?” I had to order it direct from Singapore, as Thai films with subtitles are getting to be few and far between on this side of the Pacific. Is it good enough for you to do the same? I guess you’ll have to read on to find out…..